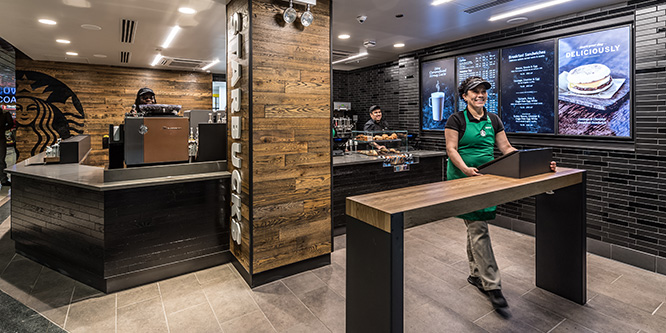 Vegetarians and vegans in the Seattle area who wanted to experience a version of Starbucks where all the food was suited to their dietary preferences had a chance to do so at some point last year, but they probably didn’t know it.

On an earnings call in January, Starbucks CEO Kevin Johnson made an offhand mention of a Starbucks location near the city which offered a menu of 100 percent plant-based food options, according to Food & Wine. He further referred to the location as a place meant for testing and innovation. A spokesperson from the chain later said that the test had concluded and there was no clarification on the location or the time frame when it occurred.

This is not the first time that Starbucks has done an under-the-radar test of a store concept with features differing from its main brand.

It was revealed in 2015 that the coffee giant had opened “Stealth Starbucks” locations in major markets. Stealth Starbucks locations, owned and operated by the company, are free of the chain’s branding and have a look and feel that varies from store to store. When news broke, one was operating in Seattle under the name 15th Avenue Coffee and Tea and another non-branded coffee shop was located on the second floor of Macy’s Herald Square. There were suspicions that many other such locations may have existed.

Although not typically done in secret, the practice of running one-off info gathering operations has grown more popular for brick-and-mortar retailers in the past few years.

7-Eleven, for instance, opened a single store in Dallas, called 7-Eleven Evolution, as a staging ground for new technologies. The store has been used to test such innovations as Just Walk Out technology modeled on Amazon Go.

The test concept, however, may be evolving into a sub-brand all its own. By the end of 2020, 7-Eleven had opened five Evolution stores, with plans to open more in 2021.

DISCUSSION QUESTIONS: Do you see a location with all plant-based food offerings from Starbucks having wide appeal? What do you think of the practice of engaging in quiet experimental concept tests like this?

Please practice The RetailWire Golden Rule when submitting your comments.
Braintrust
"Pilots always lower the risk of innovation should concepts not pan out. "

"These types of experimental concepts can be powerful incubators of high-potential ideas, but many go nowhere."

"The practice of engaging in experimental concept tests is a must. Smart of them to test and learn. They will undoubtedly apply the successful elements."

In certain markets this would probably be popular, especially as the meatless trend grows. It is similar to Pret a Manger’s Veggie Pret concept which now has around 10 stores in the U.K. These tend to be focused on locations where customer density is high and there is a higher prevalence of vegetarian and vegan customers.

However in a lot of other markets where density is lower, I just don’t see the need. Vegetarian and vegan offerings can be provided alongside products for those who want meat. Creating loads of formats is inefficient unless the underlying demand is there to support them.

Having a choice on the menu is great, but having an exclusive plant-based restaurant is an interesting thing to pilot. I don’t think a majority of Starbucks’ customers would care much about exclusive vegetarian/vegan restaurants because they don’t like mixing up with meat products. There is a segment of Starbucks’ customer base that is probably vegan/vegetarian more for environmental concerns. The positioning could be a signal to that segment.

Given the explosive demand for plant-based options, I do think there’s demand for a format like this. But it’s also possible that Starbucks is using the format to test many different menu items and will scale the most successful ones to its core format.

These types of experimental concepts can be powerful incubators of high-potential ideas, but many go nowhere. I’ve seen the most success when there’s a hypothesis being tested and a spectrum of possible end-game outcomes, from low-effort and low-commitment ways to apply what was learned (like adding a few new menu items) to the potentially transformational (like scaling a new store format).

As a 30-year pescatarian, I can confirm that Starbucks has long been offering stealth plant-based options. I prefer almond milk (vs soy milk) in my lattes, and over the years I learned to just ask for the alternative milk options. While they may not want them taking up space on their menu boards, they do often have multiple options. However the fact that they don’t put the plant-based choices on the menu tells us about Starbucks’ opinions as to the market appeal, as does the short-lived test store. It’s likely that most cities are not yet ready to support a fully plant-based Starbucks.

Technology and modular design (including operational processes) allow stores to quickly replace focus groups with under-the-radar concept stores before innovation is widely adopted. This makes even more sense for tech even given the learning curve and costs of adoption. Pilots always lower the risk of innovation should concepts not pan out. Many brands have made the mistake of launching menu or product changes with much fanfare only to have them panned. I can’t even remember the number of QSRs that have tried plant-based foods on the menu now without success. The customer base of Starbucks gives them a better chance than most but I would assume the appeal to vary widely based on the location of the store.

Short answer – no, vegan-only stores will not be prolific. It’s niche and maybe possible in a few markets. Experimentation is very, very important and usually not part of business practices because of the cost, the risk, the unknown and that dreaded phrase — “what’s the ROI?” Customer feedback through experimentation is not measured in ROI and only the best businesses recognize that it still should be done.

I doubt Starbucks even saw this as a standalone concept, it was done for the sake of testing; menus/recipes, operations, etc. I don’t see an ALL plant-based food offering having wide appeal for the foreseeable future. Even in India, a predominantly strict vegetarian culture, multi-national chains offer both meat and meatless. To me it will always be about choice and putting the decision making power in the hands of a shopper.

The practice of engaging in experimental concept tests is a must. Smart of them to test and learn. They will undoubtedly apply the successful elements.

An all plant-based menu can scale – provided, of course, the food tastes good. They could use Tom Brady as a spokesperson. I think the stealth model is interesting because it probably more closely mirrors actual consumer receptivity. If, as in this case, I wander into a Starbucks that doesn’t sell meat but isn’t branded as vegan or vegetarian odds are I’ll find something I want to eat. Put a label on the store and you’ve created a community of exclusion that will keep “average” consumers out. So, I say, keep up the stealth tests and let the best ideas win.

Based on growing realities more than mere “trends,” the potential for success of a well-run, totally plant-based food (and beverage) operation is indisputable. However, the scale of such an enterprise is less apparent.

As such, Starbucks’ stealth testing was done to determine, on a smaller level, which products could be integrated into their already existing menu selections and, on a greater one, how an entire business based solely on plant-based products might work — and succeed.

Thus, it all boils down to investment vs. profit.

Regardless of espousing and supporting environmentally friendly concepts, Starbucks is still in the business of making money. So they will have to determine whether either of the two options is worth their efforts.

Naturally, for Starbucks to fold in items is the cheaper option with a better chance of costing them less. Ironically, many (hundreds of) plant-based-only restaurants that are Starbucks-funded could serve and make millions. But how many “millions” would it be worth it for Starbucks to go in that more meaningful direction? (I’m thinking even billions!)

A “concept store” that no one knows about doesn’t strike me as an idea worth emulating.

Braintrust
"Pilots always lower the risk of innovation should concepts not pan out. "

"These types of experimental concepts can be powerful incubators of high-potential ideas, but many go nowhere."

"The practice of engaging in experimental concept tests is a must. Smart of them to test and learn. They will undoubtedly apply the successful elements."