7-Eleven’s new store concept is an ‘Evolution’ in convenience 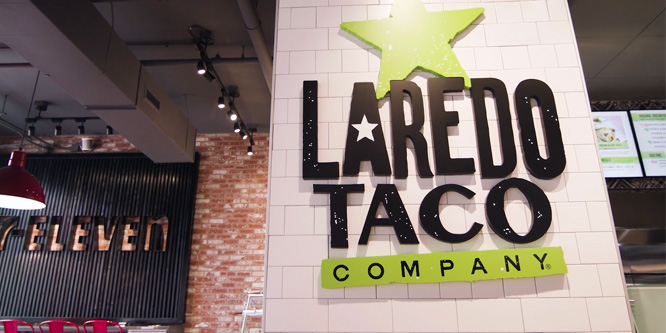 Over the last year, 7-Eleven has been running a testing ground for new in-store features in Dallas called 7-Eleven Evolution. The convenience store chain is now bringing the new concept to two new cities, with an eye toward expanding it even further.

Washington D.C. recently became home to the second 7-Eleven Evolution store and a third location will be opening in San Diego soon. The new stores, which have a range of features not found in conventional 7-Elevens, are meant to test and gather data on customer responses to those features for refinement and possible broader rollout.

Both 7-Eleven Evolution concepts feature a Laredos Taco Company restaurant in-store (a brand which the chain picked up as part of its acquisition of Sunoco). The stores also feature a range of localized product assortments, services and features. This is in addition to made-to-order specialty drinks, novelty beverages, a cold snack bar, touch-screen brewed self-serve coffee, electronics for sale via kiosk, fresh baked goods and on-the-go beauty products. An area branded “The Cellar” features an expanded wine selection and local alcoholic craft beverages on tap. (The Cellar is not available in the D.C. location.)

The convenience store brand intends to expand the 7-Eleven Evolution concept further throughout the country later this year.

Despite its position as the largest convenience store chain in the U.S., 7-Eleven has not been sitting still as the vertical has changed. Since late 2017 the chain has been promoting its mobile app, piloting services like BOPIS and mobile ordering and leveraging in-store AR gaming for various promotions.

More technological disruption is looming in the convenience store industry and 7-Eleven has been taking steps to manage that, as well. The chain recently announced the pilot of a cashierless store concept at its Irving, TX headquarters. The small concept allows for purchase and checkout exclusively via app.

Such experiments may help the chain avoid being caught off guard should the Just Walk Out technology on display at Amazon Go and Amazon’s new, full-service grocery store become mainstream.

DISCUSSION QUESTIONS: Do you think 7-Eleven’s Evolution concept will be viable across the U.S.? What information will the retailer need from its test stores in Dallas, San Diego and Washington, D.C. to plan where it should go next with the format?

Please practice The RetailWire Golden Rule when submitting your comments.
Braintrust
"This new concept is viable nationwide – the challenge will be identifying and rolling out the localized product assortments to various markets."

"I have to say, this is the nicest “convenience store” I have ever seen."

"The challenge for 7-Eleven in going to be consistent execution in its franchise organization on the fresh food offer which I see as the Evolution concept’s cornerstone."

Convenience remains a category less impacted by online, and it’s good to see 7-Eleven continue to innovate. The experimentation is what will ultimately determine if the new concept will be successful. In order to understand the impact of the new concept, I’d recommend that management closely study both store traffic and conversion trends in the new format. While store visitation may not necessarily increase, management should expect to see an increase in conversion rates and/or average sale values as key success markers of the new format.

The 7-Eleven Evolution store combines a number of proven concepts into one location. he first is the Laredo Taco Company which originated at the Stripes company in Texas. It has proven to do well everywhere it has been introduced. The bean-to-cup coffee making process not only cuts wastes and guarantees the customer a fresh cup but also adds to the theater element. The same is true for the other elements featured in the Evolution store. The challenge for 7-Eleven in going to be consistent execution in its franchise organization on the fresh food offer which I see as the Evolution concept’s cornerstone.

Convenience is a growing area of the market and 7-Eleven is in an ideal position to capitalize on it. Unfortunately, a lot of 7-Eleven stores deliver a sub-par experience that is uninspiring and lackluster. It is great to see a new format that incorporates new ideas, better foodservice and uses more technology to improve service for shoppers. This now needs to be rolled out to help 7-Eleven defend itself against more players entering the convenience and small-space market.

It’s simple. The customer wants more convenience and 7-Eleven is doing what they can to provide that. Selection, location and an easy system or process — that’s what the customer wants and what 7-Eleven is focused on. Note that price is not on that list. 7-Eleven is smart to test. And they will test some more before they roll out to more stores. That’s what smart retailers do.

Now this feels like a great concept for 7-Eleven to test (as opposed to the cashierless model discussed here recently). Localized assortments, fast-casual dining, healthier options, and a wider assortment fo fresh goods all resonate with today’s consumers and I expect these new Evolution formats to be very well received. I suspect their success will be more dependent upon marketing than anything. If people discover these new stores, I expect they will like them.

7-Eleven is doing a good job of pushing forward with new and different concepts. Especially if Amazon Go ever takes off, competition will become stiff. Better to be ahead of the curve than behind it, so kudos to them for that. The Evolution concept definitely has viability, what will be interesting to see is how they can localize it to the specific cities they roll out in.

7-Eleven is keeping up with the c-store industry by evolving to changing customers’ needs — more fresh, more theater, more drink options (including the growler station). I think this format is definitely scalable but should be tailored to the community (I am a huge fan of tacos, but that may not work in Iowa or Minnesota).

We love good (authentic) tacos up here in Minnesota! Lots of neighbors who’ve migrated in from central Mexico over the last 30 years have led to a much more vibrant dining scene and educated us all on what quality is supposed to taste like! But 7-Eleven doesn’t have any appreciable footprint in the Northland – Speedway and Holiday have the mass; Kwik Trip is the most innovative and growing quickly.

Many c-stores are leveraging foodservice as a key component, which will meld into the basic store structure. However the nature of the franchise allows for flexibility plus the association with fuel service is so high and this format isn’t a tight fit. The format will be successful in select regions with low labor costs first. I don’t see this expanding across all of their thousands of stores — but there will be a subset of stores that will take advantage of offering an enhanced customer experience.

7-Eleven is making the right moves to ensure they stay relevant, in today’s rapidly changing environment continuous improvement and transformation is required. This new concept is viable nationwide – the challenge will be identifying and rolling out the localized product assortments to various markets.

This is a very interesting question. It would be great to roll out this concept to all stores nationally. I think the challenge may be twofold. First is the perception of the 7-Eleven shopping experience, at least in the locations I know about here in the Chicago area. I can only speak for myself but there needs to be a strong customer communications strategy that accompanies any store changes, otherwise I think the concept will be challenged. For better or worse, my local 7-Elevens are not associated with the concept elements. Second, franchisees will need be supported if they are to invest in the necessary changes to execute the concept. To that end, the demand plan I mention needs to be very strong, very local. So for example, assuming it is possible, use the 7-Rewards program as the basis to help franchisees market the new concept in their local area. Maybe empower franchisees to develop their own digital relationships with the local customer base. In terms of what data to leverage from the test stores,… Read more »
2
|
0
-   Share

I have to say, this is the nicest “convenience store” I have ever seen. The 7-Eleven Evolution testing concept is a great way to test and refine. This concept is viable in premium locations that can support the volume required for profitability and attract the right demographics that appreciate the convenience and upscale offerings in the stores. It looks fantastic and I am a fan!

Every retailer that operates a chain of decent size should have lab stores to test and refine progressive offers (merch, tech, services) in a perpetual effort to reinvent itself and drive better relationships with current and future customers. Good move.

Braintrust
"This new concept is viable nationwide – the challenge will be identifying and rolling out the localized product assortments to various markets."

"I have to say, this is the nicest “convenience store” I have ever seen."

"The challenge for 7-Eleven in going to be consistent execution in its franchise organization on the fresh food offer which I see as the Evolution concept’s cornerstone."