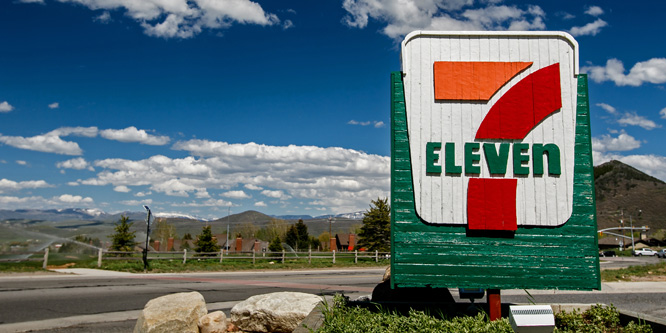 Future 7-Eleven customers could have the option to stop and stay awhile instead of grabbing a Slurpee and a hot dog and leaving, that is, if a new concept the chain is now piloting catches on.

7-Eleven has opened a new test store in Dallas, TX, according to Convenience Store News, that features an in-store restaurant and a café serving coffee drinks, smoothies and other beverages. The in-store restaurant, Laredo Taco Co., was part of 7-Eleven’s acquisition of the Sunoco gas station/convenience store chain last year. The concept is the first of six stores that the chain plans to open nationwide to test new ideas.

Despite already being one of the biggest names in convenience stores in the U.S., 7-Eleven has been pursuing a strategy of both aggressive expansion and experimentation in recent years.

The chain’s acquisition of more than 1,000 Sunoco locations boosted its number of stores in the U.S. and Canada to around 9,700.

And the company also began piloting new technological solutions in some locations, such as mobile ordering, delivery and in-store pickup in an attempt to meet a growing customer demand for omnichannel services.

But these strategic moves have occurred against the backdrop of tension between 7-Eleven franchise owners and the Japan-based mother company.

Last year, 7-Eleven corporate announced a new contract for franchisees beginning in 2019, which required a $50,000 re-signing fee as reported in the Orlando Sentinel. This along with other demands, such as increased profit sharing with the mother company and staying open on Christmas, led to a dispute with the National Coalition of Associations of 7-Eleven Franchisees.

Such conflicts raise questions about how franchisees might react were they suddenly called upon to adequately staff and operate cafés alongside the traditional convenience store portion of the business.

While the look and feel of a 7-Eleven location in the U.S. is quite familiar, abroad the company has experimented with concepts. In Taiwan, one 7-Eleven has even added a gym to its offerings, according to Forbes.

DISCUSSION QUESTIONS: Do you think an in-store café will work at 7-Eleven? How might franchisees respond to new demands for additional services that spiral out of the test stores?

Please practice The RetailWire Golden Rule when submitting your comments.
Braintrust
"Let’s hope this is another example of a new phase of retail innovation, where large chains are bolder and more serious about experimentation with new concepts. "

"The test is not of the Laredo Taco Company brand as it is well-known in Texas, but rather a test of if 7-Eleven can get the concept executed in a franchise environment."

"This feels like a painful and protracted rebranding process in motion."

I applaud 7-Eleven’s effort to test new ideas to get more out of their footprint, and more retailers should be doing the same. Let’s hope this is another example of a new phase of retail innovation, where large chains are bolder and more serious about experimentation with new concepts.

We’re a long way from a commercial rollout, so it’s way too early to worry about franchisees. If it works and improves store performance, then the hiring won’t be a problem.

This feels like a painful and protracted rebranding process in motion. I have a very clear image of the 7-Eleven brand promise in mind, and hanging out is not part of that image. Stranger things have happened though. Evolution is tough to predict sometimes.

Reinvention and re-imagining what a brand could be are a couple of the hottest trends these days. However, when one thinks of 7-Eleven, it’s a destination that is usually on the outskirts of town or at a rest stop where you want to literally grab and go.

Retail innovation is alive and well with all the experiential coffee houses popping up in both large cities and suburban towns. However, in such a congested field, the 7-Eleven brand will have a significant challenge in changing consumers’ perception and drawing new customers to the brand.

It appears they are taking a page from Wawa. Wawa has tables outside for patrons to sit and rest while enjoying the good food they serve.

While I get that iteration is important, it seems many brands are just trying things without seeming to develop from a core belief. 7-Eleven is a convenience. I need it now and don’t want to go to a grocery store, in and out. Lingering is not part of the mix. They don’t own the brand of food. I can’t see a bunch of Millennials saying hey, let’s go try that new cafe at the corner — 7-Eleven.

I am typically “all in” on experiential retail innovations but, in this case, I worry that lingering is too contrary to the 7-Eleven brand promise of convenience. When coupled with their inability to build brand around their coffee, I am skeptical that this concept will warrant a wider roll out.

The test is not of the Laredo Taco Company brand as it is well-known in Texas, but rather a test of if 7-Eleven can get the concept executed in a franchise environment. It is based on fresh tacos being made to order in the store every day. This requires dedicated labor and the understanding that this is not just another item but a whole new business.

The same is true for the café concept. It is one thing to have server-dispensed beverages and quite another to have them made to order and served by the crew. All that being said, this is the direction the c-store industry is headed. You have to give 7-Eleven credit for testing concepts that are on the leading edge of that movement.

C-stores get very little attention in retail. They have been steadily taking strides to move into other categories given the long-term declines in fuel and tobacco. They have been making major upgrades to the quality of the food and beverage offer as well as the store experience. Wawa, Sheetz, GetGo, 7-Eleven (Laredo Taco) and Casey’s all have food offers that are approaching/rivaling fast casual. Look for this to spread to other c-stores and continue overall.
This “blurring of the lines” is all around. Look at Dollar General’s evolution. Fresh produce? Sushi at Walgreens? Progressive retailers will continue to ask their customers for permission to evolve their brands. Not everything will work, but some things will and the things that do will drive the new definitions of these retailers.

Though a good idea and very appropriate, a few tables and chairs does not a cafe make.

Wawa has tables for those that want to eat their hoagies before they get back behind the wheel and it’s working out great for them. They’re similar concepts with similar offerings.

Not everyone likes the vibe at Starbucks, so this might be just the right place to grab a quick sandwich or a cup of coffee and check email in a more comfortable environment for them.

I applaud any company that tests new concepts, as that is essential in today’s competitive retail landscape. Adding an in-store taco restaurant seems like a logical extension, as long as the quality is good and the service is fast. The nature of 7-Eleven stores is convenience and it seems like a stretch to make it a destination to linger…

Also, with so many good coffee options, many consumers have become loyal to their favorite brand. Changing consumers’ perceptions of what they know (7-Eleven coffee has traditionally been typical convenience store coffee) to a premium coffee option/destination is a challenging branding effort.

This is a departure from what 7-Eleven is all about, which is convenience. They are getting ready to compete in another lane. I can’t predict if this will work or not. What they will have to do is change the mindset of their customers. Will a customer come in and sit with a friend at a 7-Eleven? Does 7-Eleven want all those customers sitting around the store – if all they are is buying one cup of coffee or a soft drink?

It’s worth a test, but any brand that makes a major change to what they are known for must do so with extreme caution.

Frankly, I don’t get this. Not only is it off brand promise — convenience, in and out, etc. — in some areas it may cause real problems. My local Starbucks, for example, operates on the company policy model of, “everyone is a customer who can stay as long as they want, with or without making a purchase.” Fine and egalitarian, but in an urban center like Detroit, that means that in cold weather the store becomes a warming shelter. So, at the height of the polar vortex a few weeks ago, ten separate fights, serious enough to require police intervention, broke out among homeless customers in one morning, causing a temporary cratering of business as regular customers tried to avoid a dose of chaos with their lattes. While that may be a dramatic example, think of something more benign, like gatherings of students who buy a Slurpee and “move in” for the duration. If I were a franchisee — depending on where I was — I might not be willing to embrace the idea of… Read more »
1
|
0
-   Share

Innovation for innovation’s sake typically does not pay off. Opening cafes is a giant step away from 7-Eleven’s convenience value proposition.

While it’s true that the c-store segment is moving as a whole beyond just “convenience” and into fresh foods, cafes, and many other non-traditional modes, this one just doesn’t seem to fit with the 7-Eleven brand. Unless this is a test to see if a total brand shift is needed going forward, I don’t see how it moves the needle in a meaningful way. You just don’t expect to hear anyone in a group of people say, “let’s go grab some coffee and sit around at 7-Eleven” — it just doesn’t happen and adding a few tables and chairs won’t change that.

As most other brands move into this non-traditional c-store concept, perhaps 7-Eleven is best served as the “last man standing” in the segment that is 100% about convenience. I also can’t imagine their franchisees being thrilled with this sort of directional change.

With over 1000 new stores in the US also selling fuel, 7-Eleven is expanding their mix of stores. About 70% of c-stores also sell fuel, and the opportunity to engage customers and bring them into the stores remains a key factor. If the cafe concept can bring in even a tiny percentage of customers it can be successful. Highway rest stops are part of the retail overhaul and 7-Eleven will participate in this engagement. The fact that they are testing new options outside the typical localized c-store is all about growth. For franchisees, the response will be mixed and they would need proof that these services are worth the investment.

Braintrust
"Let’s hope this is another example of a new phase of retail innovation, where large chains are bolder and more serious about experimentation with new concepts. "

"The test is not of the Laredo Taco Company brand as it is well-known in Texas, but rather a test of if 7-Eleven can get the concept executed in a franchise environment."

"This feels like a painful and protracted rebranding process in motion."