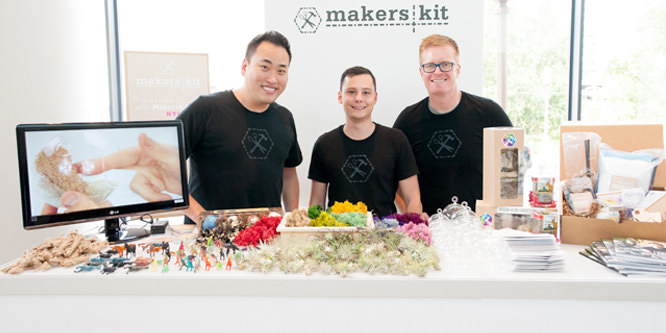 “In rapid-fire, five-minute sessions, each startup pitched their hearts out to sell venture capitalists and retail and tech influencers on their business — and their dream,” Target wrote on its blog.

More than 550 start-ups from 45 countries initially applied to be in the program that was supported by Techstars, which has run similar programs around the world.

In June, those applicants were narrowed down to 10, plus one in-house team. Over the ensuing 14-week program, the startups were advised by Target CEO Brian Cornell, Chief Strategy and Innovation Officer Casey Carl, more than 30 other mentors from Target, as well as over 100 mentors from the Minneapolis and national tech scene. At the same time, the program was designed to encourage Target’s team to think more entrepreneurially and speed up decision making.

“We need entrepreneurs developing new and innovative products and solutions that have the potential to create new paths for growth, diversify our business model and transform every facet of industry — from supply chain to operations to marketing,” said Mr. Cornell. “At the same time, these companies need us, too. Target opens doors to capital, to consumers and scale.”

Target formed partnerships with several of the early-stage companies, including one focused on third-party factory inspections, an app enabling workers to speedily swap shifts, and one offering online browsers customized blueprints of their homes to assist in buying home furnishings. A few tech products will make it to selling floors.

The program, which will return in 2017 and 2018, is also designed to “invigorate the Minneapolis tech scene.” Deals were reached with other Minnesota companies, including Best Buy and Lifetime Fitness, and some startups are establishing offices in the Twin Cities.

DISCUSSION QUESTIONS: What are the benefits and limits of tech accelerator competitions for retailers? How do they complement internal innovation centers and other efforts to explore new tech ideas?

Please practice The RetailWire Golden Rule when submitting your comments.
Braintrust
"It’s exciting to see retailers such as Target embracing innovation and inviting tech-savvy pacesetters to share their visions. "

"I have two points about the limits of this particular accelerator model. One is about money, and the other is about the competitive landscape."

"Accelerators are a very cheap way to invest and are easily used defensively and as insurance — but they tend to attract teams with more enthusiasm..."

7 Comments on "Target wraps up its first tech accelerator program"

Accelerator competitions and labs are good for entrepreneurs, retailers and local tech communities. It used to be that great innovation came from large companies, think Ma Bell, but over the past 20 years large companies got stuck in their bureaucracies, making innovation the realm of startups. It’s easier and cheaper for large companies like Target to buy innovation, rather than develop it. Innovation competitions give entrepreneurs the opportunity to showcase their ideas to people who can make them a reality. Every city wants to become Silicon Valley, this gives them a chance to shine.

Innovation is part of retail today and retailers need to stay current with technologies to stay competitive. Retailers alone can never keep pace with all the innovation happening today and a pitch event is a great medium to start to address some of that gap. Aligning it with an internal center would make actualizing some of the relevant innovation that much easier and faster. And agreed with Max here that it certainly benefits all the communities involved.

This is a smart move for retailers to stay relevant and identify emerging technologies that could possibly be a threat in the future.

I have two points about the limits of this particular accelerator model. One is about money, and the other is about the competitive landscape. Because I believe most of these finalist companies were very early-stage, with no venture capital, they are at extreme risk of not surviving, even with the help by this program. I used to be a liaison at Best Buy to the venture capital industry, and we found that even of companies with a round of venture capital and that had our interest in working with them, only 20 percent of these companies stayed in business for two years. Second, the fact that 550 companies applied should throw up a red flag. Do we think that the people who selected the finalists even had the time to dig in and make the smartest decisions on these companies? Of course they didn’t. If you think VCs make smart decisions on the best companies, and only 20 percent who get the money even stay around two years then I would surmise that, at best,… Read more »
1
|
0
-   Share

It’s exciting to see retailers such as Target embracing innovation and inviting tech-savvy pacesetters to share their visions. I expect this approach to expand quickly across other retail venues.

This week the Global Market Development Center, a trade association connecting retailers, wholesalers, suppliers and service/solution companies in the General Merchandise and Health/Beauty/Wellness marketplaces, is hosting its first accelerator program, Retail Tomorrow, at its annual HBW conference to be held in San Antonio. Another example showcasing innovation that will shape the future of retail.

The benefit of such forward-looking programs propels entrepreneurial luminaries onto center stage. My hope is that retailers — and suppliers — will seize the exciting opportunities at hand and leapfrog traditional obstacles.

Target has long been a champion of community building. This accelerator competition serves that purpose well and much more. The Twin Cities (and Minneapolis in particular) are proud of the company’s name and long history dating back to Dayton-Hudson.

With this competition, Target elevates the tech cred of the Twin Cities, attracts future tech talent to the company and generates serious brain power on retail challenges. They also up their engagement with the Millennial generation and create an environment that can help promote a new company mindset.

Change happens in small steps and from many directions. Target is undergoing internal organizational changes and appears to be fully aware of the challenges ahead on what it’ll take to compete with the likes of Amazon and the formidable Walmart/Jet.com combination. Engendering even stronger local roots to tap the right talents can only enhance the company’s future.

Accelerators are a very cheap way to invest and are easily used defensively and as insurance — but they tend to attract teams with more enthusiasm than experience thanks to onerous terms and an emphasis on theatrics. Retailers who prefer accelerators to internal innovation teams will find it easy to generate new prototypes but relatively more difficult to scale them.

Braintrust
"It’s exciting to see retailers such as Target embracing innovation and inviting tech-savvy pacesetters to share their visions. "

"I have two points about the limits of this particular accelerator model. One is about money, and the other is about the competitive landscape."

"Accelerators are a very cheap way to invest and are easily used defensively and as insurance — but they tend to attract teams with more enthusiasm..."