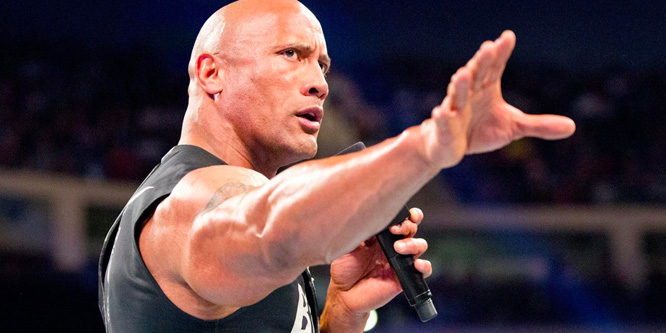 Wrestler-turned-actor Dwayne “The Rock” Johnson’s endorsement deal with Under Armour earned top ranking among best-matched celebrity brand partnerships in the fashion and retail sectors, according to a study from Spotted, the celebrity marketing company.

Under Armour’s partnership with The Rock earned perfect scores across four key measures:

Unfortunately, more than half the industry’s endorsements carry a risk score of 50 or above. The high frequency and severity of risky behavior by some celebrity endorsers has eroded consumer trust.

Over 75 percent of all endorsement deals in the fashion and retail industry also suffer from low consumer approval. Members of the Kardashian family and a few super models rank particularly low on approval and trust measures.

Luxury brands in tend to make weaker celebrity decisions than more mass-appeal consumer brands because they over-estimate the celebrity’s connections with their target audience and underestimate their risks. 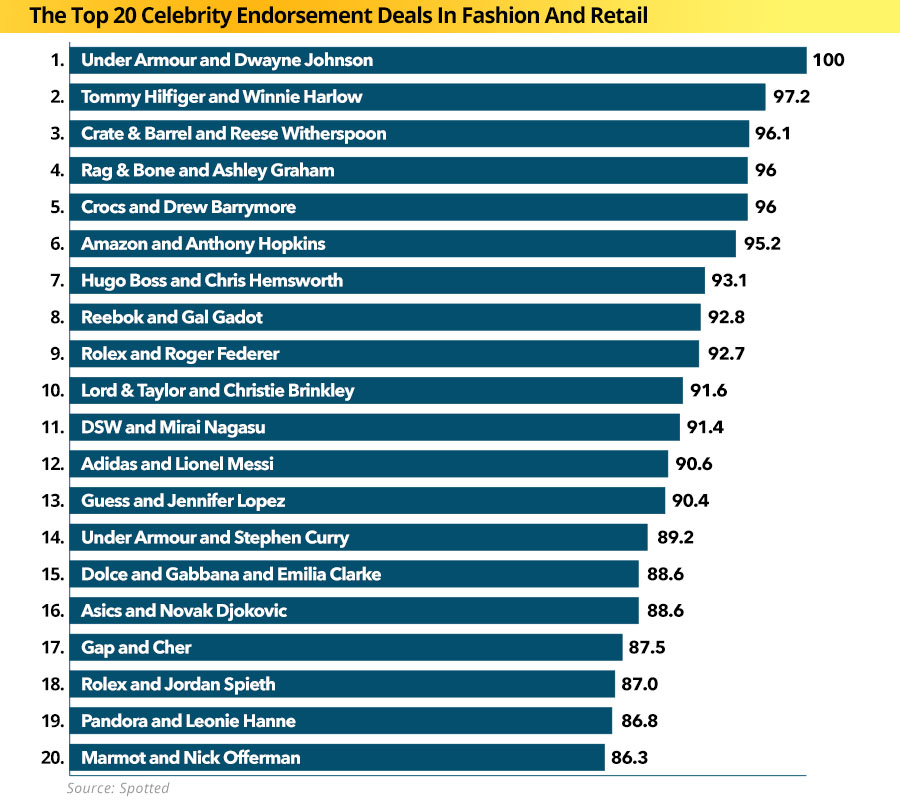 “Luxury brands tend to be more dismissive of data than mass-market brands,” noted Spotted CEO Janet Comenos in the study. “The creative directors of these high-end labels tend to use celebrities as creative ‘muses,’ even if every indication shows that the celebrity is a poor choice.”

DISCUSSION QUESTIONS: What advice would do you have for best matching celebrities with the image and guiding tenants of retailers or brands in endorsement deals? What appear to be the most common missteps in assessing partners?

Please practice The RetailWire Golden Rule when submitting your comments.
Braintrust
"The alignment of values among the brand, celebrity and their partners is the critical success factor. "

"It’s a risky business, this betting on human nature — one not for the faint of heart."

"The idea of a brand selecting a celebrity “muse” is an intriguing point ... There’s more to this than meets the eye."

The alignment of values among the brand, celebrity and their partners is the critical success factor. When a star falls it is usually due to some unsuitable activities, reflecting their values and character that the brand must detach itself from. All the world is a stage for those who have chosen celebrity, and all the world is a consumer prospect for the brands that use celebrity spokespersons and endorsement.

Making sure the image and values of the celebrity match that of the brand, are valued by the target market, and that the celebrity continues to act within accepted parameters are necessary for success. Since not all three elements are controllable there will always be some risk and surprises.

This is a tough one. Just think of Bill Cosby, at one point the most trusted man in America. So the best advice is caveat emptor. Celebrities who appear squeaky clean from the outside often are hiding deep secrets or shaky histories — think of Tiger Woods, Al Franken, Hulk Hogan, Pete Rose, many of those outed by the #MeToo movement, a rogues’ gallery of politicians, etc. The truth is the demons that drive some people to excel in fields like sports, entertainment and politics often also drive darker behaviors as well. So when looking for a spokesperson, a casual vetting isn’t ever enough to protect the image and integrity of a brand. We see it all the time, the public hero exposed, the endorsements cancelled, the posturing by former endorsers tripping over each other to excoriate the individual they were sending checks to the day before. It’s a risky business, this betting on human nature — one not for the faint of heart. As to advice, I’d say, choose carefully … and keep all… Read more »
1
|
0
-   Share

I agree with all Lyle’s and Camille’s alignment criteria for success factors. The only one I would add is staying power. Brands should carefully evaluate the longevity of their celebrity endorsers. What they are paying for is the brand awareness of the celebrity. Should that fade so does their value as a spokesperson.

The idea of a brand selecting a celebrity “muse” is an intriguing point. Regardless of consumer opinion, some brands can build “mystique” around the combination, and that mystique can create incredible attention and influence. There’s more to this than meets the eye. Sometimes, as in the case of Timberland boots, a celebrity attaches themselves to a brand while creating a bit of disruption. The hip-hop icon’s attention brought Timberland to a whole new level.

I’ve worked extensively with the licensing community for years and have seen any number of celebrity big bets crash and burn. Celebrity scandals get the most attention but the multi-stakeholder, multi-media, multi-category nature of celebrity marketing creates unique vulnerabilities on several fronts to include: Faulty assumptions – Assuming that Q scores and other metrics translate into consumer affinity (or retailer attention). Jumping the gun – Signing big deals, committing to guarantees and royalty rates on a wish and a prayer, without solid backing or established retailer buy-in. Poor execution – Late releases, piecemeal product deliveries, licensee/manufacturer snafus, etc. Dilution – Daring products to get noticed or succeed in over-crowded, over-branded environments (online or in-store). What looks powerful in a showroom vignette can easily get lost in “real life” on the floor. Over-extension – Pushing into new categories and channels too fast or too aggressively. The primary piece of advice for brand owners and brand managers is to diversify and take a portfolio approach to the business. It’s never a good idea to go all-in on… Read more »
0
|
0
-   Share

The poll respondents were split 1:2 for mismatch/risk, but I’m with the former. I think the most common mistake, assuming “mistakes” are made, and I don’t know that they are (at least commonly), is to confuse general popularity with popularity in your specific demographic. From my youth I can remember Dale Earnhardt endorsing “Peak” anti-freeze. I could readily see the logic in that (or Steph Curry and Under Armour); but Kristine Brinkley for Lord and Taylor? Granted a department store has a broader focus than a specific product, and they may be trying to expand their appeal, but still, based on my understanding of their customer base, I have doubts.

I must admit I was a fan of the Rock from his early days in the WWF. In fact, at one time I was a “Hulkamaniac,” courtesy of my fascination with professional wrestling. I thought it was real, which says something about university professors (LOL).

However, the questions of fit & the attendant risks, makes me one who would not recommend engaging celebrities. There are other more efficient & effective uses of marketing resources.

Braintrust
"The alignment of values among the brand, celebrity and their partners is the critical success factor. "

"It’s a risky business, this betting on human nature — one not for the faint of heart."

"The idea of a brand selecting a celebrity “muse” is an intriguing point ... There’s more to this than meets the eye."