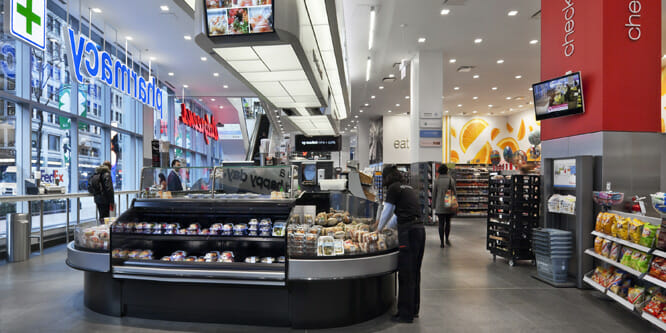 The last time Walgreens revamped its look and feel, the chain was opening flagships and implementing new store features that added elements of grocery — even higher-end grocery — to the pharmacy experience. Now Walgreens is planning an overhauled store format built around healthcare services and partnerships.

In-store lab services, optical care and enhanced patient care offerings handled through partnerships with companies like MedExpress — features that have been piloted in some stores already — will all appear under one roof in the new format, according to Drug Store News. The first implementations will come in the spring or early summer with plans to pilot the new format between six and 18 months before rolling it out across the retailer’s store footprint.

Changes have been coming to the brick-and-mortar pharmacy world as retailers work to become more convenient and tech-enhanced, possibly due to concerns that Amazon may be planning to move into the prescription drug business.

CVS, for instance, began rolling out next-day and same-day prescription delivery service last year in select markets. And both Walgreens and CVS recently announced partnerships with Blue Cross to cover the cost of Lyft rides in select markets, so that people without access to reliable transportation can fill their prescriptions in-store. And Walgreens has had a great deal of success with its mobile pharmacy app, designed to be user-friendly for the older audience that uses it.

Walgreens has also piloted some new services outside of the pharmacy recently. Last year it began offering FedEx drop-off and pickup services at some locations with an eye towards an expanded rollout. It’s not clear if this service will be rolled into the planned store overhaul.

The two main drugstore chains may have even more competition coming their way. Walmart has been in preliminary talks about a potential merger with insurance giant Humana, according to CNBC.

DISCUSSION QUESTIONS: Is Walgreens in need of a store redesign? Is focusing on healthcare services and partnerships, rather than building out the CPG side of the equation like it did during its last revamp, the path to success for Walgreens?

"Shifting its focus from expanded grocery items to offering broader health care services via partnership seems like a smart strategy for Walgreens."

"I’ve not seen any of the newer-formatted stores so I can’t speak to that but any refresh is a welcome movement in my book."

I’m glad to see that Walgreens plans to pilot these initiatives rather than just roll them out — the ideas are not obvious and could have significant expenses associated with them. I believe they need to be careful to not overdo the convenience option. Nobody is winning with “one-stop shopping” and if Walmart can’t do it with their store sizes, it’s unlikely that Walgreens will either.

I’ve always had issues with the way Walgreens merchandised their stores — very cluttered and very often dated. I’ve not seen any of the newer-formatted stores so I can’t speak to that but any refresh is a welcome movement in my book.

In terms adding healthcare services, I think it is a smart move. The products any drugstore sells in their stores are increasingly moving online so it makes sense to devote some of that footprint to things like walk-in clinics. Some of the other services described in the article add to the “experience” and create differentiation — the key to compete.

Walgreens’ focus on healthcare services, given the expected competitive actions, makes sense. However, it makes more sense in light of the aging of America. Plus, research demonstrates that consumers who visit the large chain retailers to pick up a script more than likely buy non-script products. It’s similar to folks who go into a c-store to use the ATM and leave with a sandwich, snack or drink. The healthcare services can be like the pharmacy or ATM — they provide a differential advantage and drive store visits. So in many cases, it is not one additional attribute that makes a difference. Rather, it is a strategic approach to understanding and satisfying customer needs.

You have to wonder what role tobacco products will have in any new Walgreens design/merchandising effort. CVS has taken less of a revenue hit than expected since it dropped cigarettes and cigars. Plus a good chunk of the folks who previously purchased tobacco from CVS wound up quitting the habit and used cessation solutions purchased from the drug chain to do it, according to an analysis published last year in the American Journal of Public Health.

The concept of a pharmacy offering more healthcare services makes perfect sense. Especially when our healthcare system has so many weaknesses. Small footprint clinics to do such things as flu shots, run blood panels, take blood pressure and other procedures that don’t require a doctor could certainly add value. For my 2 cents.

I agree with David Weinand’s comment that a store redesign is overdue. Walgreens’ natural positioning is in the health and wellness category (it is a pharmacy, after all) but the shopper is currently overwhelmed by candy, junk food, cigarettes and a wide assortment of “stuff.” Walgreens has decided to be a modified c-store (with shrinking footage devoted to actual health products) and it makes a typical store almost impossible to navigate.

Anything that Walgreens can do to emphasize its brand positioning (and to make the shopping experience easier) is a welcome change.

Given the seismic shifts taking place across the identity and experiential expectations of brick-and-mortar retail, Walgreens adding healthcare services into their portfolio of offerings is timely and smart. Integrating complementary services with a store redesign would not only be innovative but a natural progression for Walgreens. Given that Berkshire Hathaway, JPMorgan Chase and Amazon have teamed up to create a new healthcare paradigm for the Medicare population, Walgreens would be derelict NOT to facilitate such services.

In general, U.S. drugstores are way behind in terms of format innovation. Given their localness and convenience they should be a destination of choice for all kinds of things. That they aren’t is partly down to dispiriting environments, poor layouts and a lack of inspiration.

As such, this is a smart move from Walgreens. Focusing on health services is sensible as this is the area rival CVS intends to focus on, so Walgreens needs to act defensively.

The drugstore space is doing the right thing by focusing on the full range of non-MD provided healthcare services. The customer is already in their stores, the need is there and the margins are there.

The drugstore channel’s foray into “convenience store land” with their front-ends did not end well for them. Sales and foot traffic increased but margins took far too big a hit to make the model pay out. Consumers just weren’t as willing to pay a premium for convenient fill-in grocery purchases as originally expected. The fact that drugstores are generally in close proximity to grocery probably didn’t help any.

In contrast, dollar stores made more of a commitment to “limited assortment full grocery” and focused on low price. That and the dollar channel focus on under-served markets has worked considerably better.

Drugstores, in general, do not cry out “destination” for most consumers. In this ever-changing retail landscape, a store redesign is a good thing. Plus, one would expect services to deliver better margin than most of the merchandise in a Walgreens. We can also expect that increased used of conversational commerce will drive the purchasing of many non-food items in a Walgreens to online as many of these products lack brand loyalty for most consumers. It’s not a stretch to see the combination of more healthy food items, health items, and now health services in a redesigned Walgreens in convenient locations to drive increased foot traffic.

Just by chance I happened to be in a Walgreens this morning, and what struck me was the lack of SKU consistency between stores (at least for the products I was comparing and with the other store I was in before).

So with that in mind — and particularly when phrases like “some stores” and “flagship” are uttered — I would be concerned with how widely the services will be offered. As was mentioned last week, few things are worse than hearing words like “new” and “improved” and then finding out you(re store) are(is) not invited.

The path to success is to be an indispensable stop for shoppers. Pharmacy guarantees a certain amount of traffic, and adding additional health services guarantees more.

Like all segments of retail, drug stores are going through a transformation to adapt to changing customer shopping behaviors and new competitive dynamics. Shifting its focus from expanded grocery items to offering broader health care services via partnership seems like a smart strategy for Walgreens.

The doctor may in fact be in at Walgreens!

Retailers are continuing to redefine the role of the store and it is essential for survival.

"Shifting its focus from expanded grocery items to offering broader health care services via partnership seems like a smart strategy for Walgreens."

"I’ve not seen any of the newer-formatted stores so I can’t speak to that but any refresh is a welcome movement in my book."