Is the $400B prescription drug business ripe for an Amazon disruption? 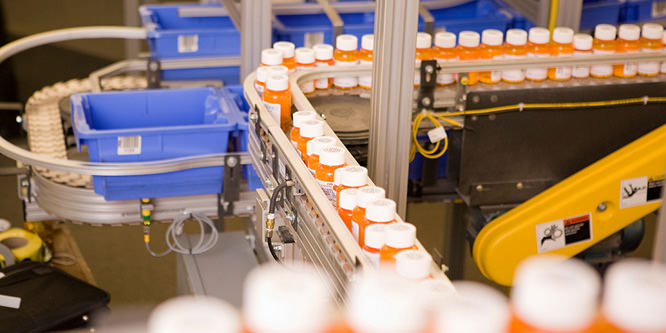 CNBC reported yesterday that Amazon.com is hiring an executive to lead its entry into the pharmacy business. Two unnamed sources familiar with Amazon’s plans told CNBC of the planned hire as well as annual meetings the e-tail giant has held in recent years to explore a potential entry into retail prescription medicine sales.

CNBC’s sources said that Amazon’s move into selling prescription medicines is not yet a “done deal” due to the complexities of the pharmacy business. It is, however, moving ahead with the hiring of a general manager to formulate a strategy and lead a dedicated team.

The retail sale of prescription drugs is a $400 billion business in the U.S., Adam Fein, president of Pembroke Consulting, told The Washington Post. The top 15 pharmacies in the U.S. including CVS, Walgreens, Express Scripts, account for about 75 percent of that.

Mr. Fein estimates that Amazon would capture between five and 10 percent of the category’s sales were the company to enter the business. “I think they would challenge the economics of the retail pharmacy industry,” he said.

“Look at what Amazon has done to malls,” Mr. Kraus added. “In the future, when people say they’re going to a Walgreens or CVS, they might instead choose to go to Amazon.com.”

The biggest opportunity for Amazon to disrupt the market would be to partner with employer health plan providers, according to Kevin Schulman, a professor of medicine at Duke University. He told the Post that Amazon’s biggest hurdles would be compliance with patient privacy laws and other regulations.

Amazon’s access to consumer data could be a game changer, according to Prof. Schulman.

“If Amazon would know that you have diabetes or hypertension, they could do a lot with that data,” he said. “In principle, they could set up a marketplace where they behave differently, with different rules and different privacy practices.”

DISCUSSION QUESTIONS: What do you think an Amazon.com entry into the retail pharmacy category would look like? How would it affect the sale of prescription drugs in the U.S.?

Please practice The RetailWire Golden Rule when submitting your comments.
Braintrust
"The question is whether Amazon can bring the drugs to market at lower costs than are currently available. That would be disruptive."

"Big Pharm, in lock-step with the best Congress money can buy, will surely not let anything truly significant happen on drug pricing."

"Amazon’s bigger issues will be dealing with all the federal laws regarding health and drug requirements."

15 Comments on "Is the $400B prescription drug business ripe for an Amazon disruption?"

When you look at companies like Express Scripts that do prescription delivery, and compare the model to Amazon, it is a natural extension for Amazon to consider. Can Amazon disrupt the retail pharmacy industry? You bet! And the customer will be the beneficiary.

One can try to be profound about this — or just practical and say, Amazon can’t lose on that bet. The question is whether or not Amazon can be innovative enough to bring the drugs to market at lower costs than are currently available. That would be disruptive.

This is a direction that makes sense for Amazon — there’s no value in shopping for the product, it requires a regular supply and it can be shipped. Depending on the economics of the business (which I don’t know) it could be profitable for them.

I wish experts would stop using the term “disruption” to excuse all manner of tech silliness. Let’s focus on what matters here: is this an area where Amazon can make good money and what would the impact be on existing players?

To say that Amazon would “challenge the economics of the retail pharmacy industry” is, I believe, an understatement. Federal, State and FDA regulations and our broken healthcare system have allowed prices to skyrocket. Amazon’s logistics and efficiencies would definitely provide immediate price competition. Maybe it would allow us to purchase select drugs in Canada?! The entire pharmaceutical/insurance/healthcare trifecta has to change. Money and greed have infected and undermined the entire system. Perhaps Amazon can at least begin to crack the armor.

Drugs are a pure commodity — which is where Amazon shines. If the product is exactly the same (which is the case with FDA-approved substances), all Amazon is competing on is customer experience, with which they have already shown they will win. Comparing a typical Amazon transaction with the labyrinth of phone trees and troves of unnecessary repeated information required to get a mail order pharmacy order completed is illustrative. Imagine Amazon combines their Mayday feature with this offering, allowing instant video access to a pharmacist via your kitchen table while pills are dispatched for same-day delivery. Goodnight retail pharmacies.

If done correctly this could be a huge market for Amazon. I think we’re at the point at least for now at which there is nothing Amazon can’t do and succeed with, so prescription drugs could be another winner. The advantages would be for the consumer who does not have a prescription plan. It is very unfair what pharmaceutical companies charge for the drugs patients need, and I’m sure Amazon would have no problem finding customers. However, Amazon’s bigger issues will be dealing with all the federal laws regarding health and drug requirements. It can be a nightmare. I have worked with pharmacies in the past, and the regulations and compliances are very involved. But if done right and done well, I think Amazon would find themselves once again building another strong market.

Here’s how you know that Amazon is going to win big at this: what kind of brand loyalty do you think CVS and Walgreens have built up over the last 20 years? Any? I doubt it. Do you think of going to either of those stores as something you look forward to? No way. Stores just stacking stuff on shelves in a non-experiential, low-service model (drive-thru being their most distinguishing feature) is not enough anymore. Sure they’re on every corner, but if I’m sick or elderly, that doesn’t really matter.

But prescriptions shipped to my door? Huge. Especially from a brand you already trust (most trusted brand, years running). This is Amazon’s wheelhouse. Here comes more big time disruption.

Entry into the pharmacy market is a natural fit for Amazon’s model. And the potential scale, efficiencies and visibility would indeed change the face of the traditional retail dispensary model. (A watchword to the established pharmacy sector … up your game and focus on the value of advice rather than the Rx commodity or Amazon may eat your lunch.)

Sure there are obstacles and hoops — nothing that Amazon isn’t capable of conquering. Even if Amazon elected to only focus on maintenance drugs and the highest volume generics, the size of the prize may be worth pursuing. Combined with the analytics and basket-building knowledge that Amazon holds, I believe this market is too ripe to ignore.

As was already said here, to say Amazon can succeed in this market vertical is no-brainer. Margins in this vertical are too high and efficiency is too low, hence there is much room to improve. The uncertainty is related to regulations and privacy issues — to become a player in this category they should comply and become a part of the ecosystem, which takes time and is not trivial to do.

First of all who really knows the price of drugs? My mom has to shop around because the same exact prescription is $180 at one drug store an another one has the same script for $90. Sounds like they just get to charge what they want. If Amazon gets into to this drug business they will most likely try their best to have the lowest prices and we know they will be delivered. So it will be another home run for them, they are going to try to ship everything they can get their hands on. So would I. It’s only a matter of time before they have liquor licenses and are able to ship alcohol, already doing beer and wine. And when marijuana is legal everywhere, maybe not in some of your guys’ time, they will be shipping that to. Have a nice day. ☼

I’d like to be excited, but I’m not. Big Pharm, in lock-step with the best Congress money can buy, will surely not let anything truly significant happen on drug pricing. And I have to say that in terms of efficiency and user-friendliness, my mail-order pharmacy is terrific. But of course their prices are outrageous, as is true everywhere. I once complained about the price of something I knew should cost about $7 and for which my insurance company was routinely charging more than $100. The insurance company rep calmly told me over the phone, “But it doesn’t matter, because you aren’t paying for it anyway.” Infuriating. If Amazon can find a way around this long-standing fiasco, I’ll be very surprised, and Amazon, in those circumstances, would win way more than 10% of the market.

Let’s face facts — Amazon is a massive logistics engine. They’re ability to ship anything anywhere is unparalleled. Couple that with the potential for a great customer experience (not around discovery since that doesn’t apply for prescriptions) you have a winning formula.

Imagine the interaction a customer will have for prescription drugs with Amazon. They have their Mayday technology, chat, etc. all of which would immediately build customer loyalty in a way no current pharmacy has. Who among us wouldn’t switch pharmacies for one that delivers an “Amazon-level” experience? I doubt any of us have any true loyalty to brands like CVS, Walgreens, Rite Aid, etc.

Amazon has a strong track record of expanding into new areas of retail and disrupting the traditional retail model. With the added complexity of pharmacy Amazon will likely acquires some smaller online pharmacy businesses to quickly obtain the skills and processes that are unique to prescription sales.

The added benefit of a greater knowledge of its customers, based on their health issues, will provide Amazon more intelligence and insights that will enable incremental opportunities to recommend products that are relevant. We have said before that any commodity market that Amazon enters they will own and that is true here. Some day perhaps we will allow an open market for prescriptions in the US … if that happens, Amazon, who has financial weight greater than many countries, will be able to drive prices down for their prime customers.

Amazon has one particular asset that is massive and exploitable for health: consumer data across various purchase categories. If the company can mash up medical and pharmacy claims data with food, OTC and personal care, then it can make “recommendations” to shoppers for food and other products that can help manage a condition, Beyond the logistics of being a virtual pharmacy channel, this Big Data Analytics capability would be transformational for consumers’ DIY healthcare and could help lower costs to the system and valuable consumer health engagement.

Braintrust
"The question is whether Amazon can bring the drugs to market at lower costs than are currently available. That would be disruptive."

"Big Pharm, in lock-step with the best Congress money can buy, will surely not let anything truly significant happen on drug pricing."

"Amazon’s bigger issues will be dealing with all the federal laws regarding health and drug requirements."