Walmart welcomes back its greeters, sort of 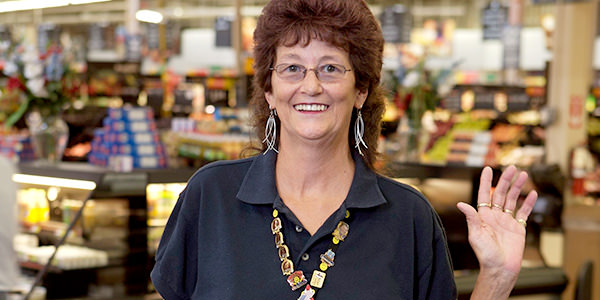 A 2012 RetailWire piece speculated that Sam Walton flipped over in his grave after the company he founded made the decision to move greeters away from store lobbies and closer to registers. Well, Mr. Walton may get the opportunity to flip back again with the news that Walmart is testing greeters in 300 of its stores in the U.S.

So why is Walmart revisiting the idea of placing greeters, an innovation introduced by Mr. Walton and closely identified with the company for years, back at store entrances? The primary reason is that the chain is looking to cut down on theft, according to a Wall Street Journal report.

The decision to move greeters three years ago was done so associates could help direct customers to shorter lines at the checkout while showing others where to find products in the store.

At the time, Walmart spokesperson David Tovar, told Bloomberg, "It’s a better position inside the store. The greeters will be able to assist customers in more effective ways. Whether they are coming in the door or are 15 feet away, they will still be able to greet people."

Long checkout lines have been a common complaint about the Walmart shopping experience for years. That doesn’t appear to have changed much since the company repositioned its greeters.

Did Walmart make the right or wrong decision three years ago when it repositioned greeters in its stores? Should management move greeters back to the lobbies of its stores?

Please practice The RetailWire Golden Rule when submitting your comments.
Braintrust
"I think Sam Walton is spinning in his grave for more reasons than one. I did not know the man, but from what I’ve been told he had a vision. I don’t think that vision included creating a close alliance with China, pushing the chain’s stores into communities that really didn’t want them, using funds in his eponymous foundation to help pave the way for those stores, or bribing officials in other countries to grease the wheels there."

8 Comments on "Walmart welcomes back its greeters, sort of"

Depends on the area. I’m visiting a $120 million per year Walmart this week. Upon entering a customer was being escorted by the police in handcuffs. Asset protection employees making notes. I spoke to one and he told me $3.5 million walked out the door last year. The greeters are no deterrent and if this continues this high volume store may have to be closed for “plumbing problems.”

Normally the job of greeter is a charitable “make-work” job given to someone who is elderly or disabled. However in some areas a more skilled employee is needed to help reduce shrink.

It’s hard to judge if what Walmart did was right or wrong because most of us don’t even understand what they did or didn’t notice it. Whatever was said in press releases or news articles perhaps never actually made it to the sales floor. Kind of like the Colorado River, by the time it reaches the Pacific, it’s all dried up.

The move was understandable. One of the fears everyone has is that they are in the “slow” line at the checkout. Having someone assist customers with queuing was a good decision but still doesn’t remedy the situation about the person who decided after the order was totaled that the price was too much and to take out this item or take that item back. Or like me, who when I was in a hurry made a mistake and used the company credit card for a personal purchase and then had to have the purchase credited back, swipe the company card and then start again. Numerous articles have indicated the impact on shrink the Walmart greeter was supposed to have had. I can only assume this test is an attempt to validate the theory. If it does then we will soon see a greeter at more, not all, locations. Then the questions will be, what was the customer’s reaction in the checkout lines? Could we have both a greeter and a customer service representative assisting in… Read more »
0
|
0
-   Share

Maybe, just maybe, Sam Walton’s desire was to be community-minded and assist the elderly in feeling good about having somewhere to go and something to do. I see nothing wrong with what he did or the “test” in bringing them back. What I don’t understand is that this is something that was in place everywhere for countless years. Certainly they know the good and bad of the program. So what is the reason for assigning the word “test” to the return of what was a good program?

I think Sam Walton is spinning in his grave for more reasons than one. I did not know the man, but from what I’ve been told he had a vision. I don’t think that vision included creating a close alliance with China, pushing the chain’s stores into communities that really didn’t want them, using funds in his eponymous foundation to help pave the way for those stores, or bribing officials in other countries to grease the wheels there.

By most accounts Mr. Walton was an honorable man. Greeters were part of his in-store experience and a way of giving back to the local communities.

I think the horse of his vision has long since left the barn. The company has its own trajectory now, it has to redefine itself in a saturated market. Greeters are the least of its problems.

Walmart will make more profits by slowing down theft than they will by having greeters direct people to checkout lanes. For that reason alone I think it’s a good idea to place greeters back near the entrance.

However, it will also help Walmart’s customer experience if greeters will actually be knowledgeable enough about the layout of the store and where consumers can find certain types of products, more so than they did in the past. In other words, train greeters to serve a customer purpose beyond simply being a symbol, or someone that says hello or is placed in position to help prevent theft.

Maybe I’m shopping in the wrong Walmart, but I haven’t seen greeters anywhere in the store.

Greeters provided a real human face to the Walmart shopping experience, which can be pretty industrial without them. How will management measure the ROI on returning them?

They never really repositioned greeters; they did away with a position. If they had moved the greeters to help speed up the line it didn’t work because they never increased either the number or the speed of the checkers. If you want a fast checkout experience go to Costco.

If they bring back greeters, will it actually do anything to increase efficiency or reduce theft? I would not bet on it.

Management would get a better return by spending the money on better training, and focusing on the checkout problems.

If the greeters were empowered to be front end managers (i.e., calling up additional cashiers), then it was a good move that may not have been executed well.

The move back to the entrances must definitely be for shrink purposes. There are better ways to deter/combat theft.

Braintrust
"I think Sam Walton is spinning in his grave for more reasons than one. I did not know the man, but from what I’ve been told he had a vision. I don’t think that vision included creating a close alliance with China, pushing the chain’s stores into communities that really didn’t want them, using funds in his eponymous foundation to help pave the way for those stores, or bribing officials in other countries to grease the wheels there."