WeWork doubles down on member-based retailing 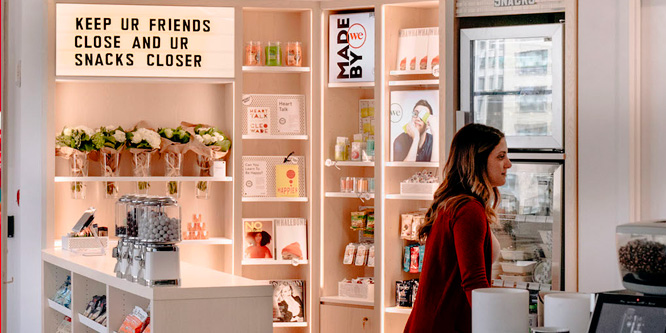 WeWork, the office-sharing giant, has branched out into retail with the launch of WeMRKT, a concept featuring products made by its members and sold primarily to its members.

The shops will initially only open in WeWork locations. The first, measuring 80 square feet, opened June 25 at WeWork 205 Hudson in lower Manhattan featuring a number of healthy snacks, as well as office necessities and branded apparel. More openings are expected across WeWork’s 110 offices in the U.S. and the concept could eventually reach its more than 85 international offices.

The company chose the first 10 products featured in the first WeMRKT in a pitch competition in April. Winners were selected based on their creativity, innovation, capability and impact. WeWork will hold competitions for new products quarterly. Winners will have further opportunity for distribution through SnackNation, which curates and delivers better-for-you snacks to offices.

For members selling through WeMRKT, the concept also serves as an incubator to test products. There are no fees for any member selling at WeMrkt.

“The WeMRKT is a great example of WeWork’s commitment to our members’ success,” Julie Rice, chief branding officer at WeWork and co-founder of SoulCycle, told Technically Brooklyn. “As brick-and-mortar retail is disappearing, our WeMRKT’s will offer our members an entirely unique channel of distribution.”

WeWork’s move into retailing is drawing interest because the company partnered with Rhône Capital to acquire the Lord & Taylor flagship on Fifth Avenue in Manhattan. The building’s bottom floor is being rented out for retailing, restaurants and possibly a food hall. Hudson’s Bay, the parent of Lord & Taylor, also reached agreements with WeWork to lease retail space within select locations, including on Queen Street in Toronto, Granville Street in Vancouver and Galeria Kaufhof in Frankfurt.

Earlier this year in partnership with WeWork and LinkedIn, J.Crew hosted a panel discussion series featuring the “next generation of entrepreneurs and goal-getters,” selling items inside some WeWork locations and featuring WeWork members in an ad campaign.

DISCUSSION QUESTIONS: Do you see WeMRKT working best as an incubator for brand start-ups, a community-building tool for WeWork members or as its own retail concept? Does the WeWork model share natural adjacencies that align with retail?

Please practice The RetailWire Golden Rule when submitting your comments.
Braintrust
"I'd be excited to see a brand incubate in WeWork and then successfully scale to their own pop-ups and permanent stores."

"I’ll be paying attention to the partnerships with retailers that develop over time with WeWork/WeMRKT so that these early-stage companies can succeed."

"WeMRKT is clearly an attractive community-building tool and — for now — that would seem to be its strongest appeal."

13 Comments on "WeWork doubles down on member-based retailing"

Our office in Chicago is in a WeWork space. On all my visits there, I have been impressed by the community spirit of people and businesses in the building. As such, I can see this type of retail concept working well. It will be niche, of course — but it gives new firms scope to make sales, gain feedback and find opportunities for collaboration and business development!

WeMRKT as an extension to WeWork locations makes great sense. Start-ups tend to get a lot of visitors who are themselves entrepreneurial so the co-location benefits everyone. Any element that can provide market interaction and amplify the zeal for a new idea has high value.

Resisting the urge to poke fun at the name (WeWork, WeLive — WeMRKT? Why not WeShop? Sillies.) I see this concept best working as an incubator for members. We already see this working at The Wing, “Bulletin and other similar indie models mainly and *ahem* notably headed by women. It’s certainly a draw for WeWork’s retail members to invest in membership when opportunities for pop-up testing are right there! The overhead is so low. Marketing and staffing costs are next to nil. Plus, WeWork members are already used to purchasing items from unmanned snack bars.

As usual, I hope WeWork uses tech to gather data on these shops (more foot traffic during afternoon pick-me-up rush? More likely to buy something crunchy with juice on weekends? etc.) and share it with their members so everyone can learn from that experience. I’d be excited to see a brand incubate in WeWork and then successfully scale to their own pop-ups and permanent stores. That’d be the true mark of success for this initiative.

This is a cool concept to help their members succeed (and thereby ensure longer tenancy) and a way to help build community (and hence loyalty with their members). This is essentially a retail-as-a-service model that so many are rolling out so it’s not really a unique retail concept. WeWork is expanding into several adjacencies and not all will work or be home runs but this will be a very interesting concept to follow.

WeMRKT is clearly an attractive community-building tool and — for now — that would seem to be its strongest appeal. WeMRKT also extends the idea of an incubator from product development into marketing, retailing and customer interface — an important next step in the idea of incubators. As a standalone, I’m not too sure. This seems like an idea that could fail fast if rolled out too quickly. Better, I think, to test and learn and then we will see what the viability is for WeWork and beyond.

Interesting that this is focused on the myth of WeWork — the myth that they succeed by offering office space to small entities. From what I’m reading and from conversations with commercial realtors, roughly one-half of the WeWork offices are rented by large corporations for temporary or remote employees.

I do not expect this to produce results. A great PR move, but the reality of WeWork is unlikely to lead it to success.

It most naturally works as an incubator out of the gate, but I suspect it will evolve into a standalone retail concept before we know it. One of those “that was sneaky” good ideas you only see in retrospect.

In my opinion, viewing WeMRKT through a strict community-building lens misses the underlying point. WeWork has a bunch of assets (captive audience, tenants that skew innovative, physical space) and are looking to use them to their full advantage to build out member brands.

Market testing/feedback, data and real revenue — this is a huge advantage and accelerant for upstart brands.

I see this two ways; one as a community building experience for the small organizations that lease WeWork space, and two as a loyalty and desirability factor for the large companies that lease space for remote or branch office employees. The groups seem to be evenly split among the WeWork customer base so it will be interesting to see how this works out. Taking this and the recent work with J.Crew and Lord & Taylor, it’s interesting to see how WeWork is branching out to best leverage their space beyond pure office leasing. This makes sense as you have to wonder how long-term sustainable their model is, given the prices they are paying for the real estate. You can only make so much revenue by leasing out space to small companies, so continuing to add adjacent business models may work well for WeWork.

I’ll be paying attention to the partnerships with retailers that develop over time with WeWork/WeMRKT so that these early-stage companies can succeed. Having a physical location for these brands to pilot and trial is essential, and from observing similar partnerships at 1871 here in Chicago (ranked top tech incubator in the world), there are always a strong number of B2C retail products and companies, but less B2B. Will be interested to see the support and opportunity for B2B startups actively working with the retail industry via WeWork/WeMRKT.

The WeMRKT concept has the potential of being quite exciting for the makers (the brand startups) and the public (as a new retail concept).

I imagine it’s as if Kickstarter and Indiegogo put on “best of” exhibits. It’s a discovery + novelty formula that brands and WeWork can leverage to draw in new and repeat customers.

As a consumer, I would definitely be interested in discovering new products by indie manufacturers. As a brand, what a great opportunity for market feedback. About fostering community? All of it will depend on how the concept is executed at a local level.

Almost every office I have worked in had some form of convenience/snack/coffee retail and in almost every instance, they lacked quality and imagination. WeMRKT can for sure stand out in that space and provide quality for WeWork members and as a cool way to test new products are brands. This seems like an easy place for disruption and presents another marketing tool for WeWorks as they expand their locations.

Hmmm, reminds me of the Smarter Image stores. They were cool. But I never bought anything.

… and the initiative to source regionally produced products at an Ace Hardware affiliate focusing on urban markets in DC and Baltimore.

Braintrust
"I'd be excited to see a brand incubate in WeWork and then successfully scale to their own pop-ups and permanent stores."

"I’ll be paying attention to the partnerships with retailers that develop over time with WeWork/WeMRKT so that these early-stage companies can succeed."

"WeMRKT is clearly an attractive community-building tool and — for now — that would seem to be its strongest appeal."