What can TripAdvisor bring to retail? 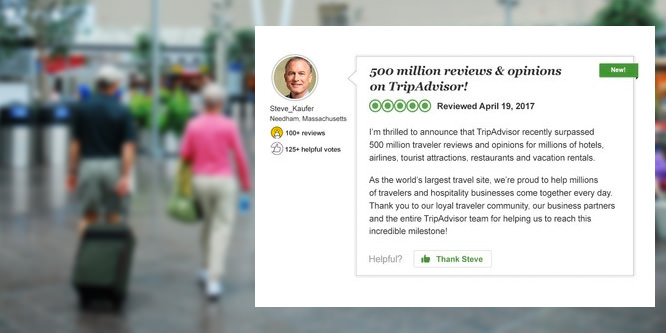 TripAdvisor, the leading travel website, is opening a store at Raleigh-Durham Airport, the first such move for a reviews site.

According to a report in the News & Observer in Raleigh, NC, the store, to open in the summer of 2018, will offer fliers “the opportunity to explore popular destinations through touchscreens and an interactive wall. Travel essentials such as snacks and souvenirs also will be available.”

The store will open through a partnership with Paradies Lagardere, which operates more than 850 stores and restaurants in 98 airports. These include media properties such as The Today Show, Univision, USA Today and CNBC.

TripAdvisor hasn’t commented on the store. The travel planning and booking site, founded in 2000, last week announced it had crossed the 500 million reviews and opinions milestone. The company said it now posts 290 pieces of content per minute.

Trefis, the financial research firm, speculated that the store will support TripAdvisor’s fledgling booking business, Instant Booking. Competitors include Expedia and Travelocity as well as newcomers, Google and Airbnb.

Amazon Books, which just opened its sixth store with a location in Lynnfield, MA, is one of the few stores that have brought an online reviews component to physical stores.

DISCUSSION QUESTIONS: Do you see online consumer reviews becoming a bigger part of the in-store shopping journey, whether through mobile phones, kiosks, signage or other ways? Do you see a retail opportunity developing for review sites such as TripAdvisor?

Please practice The RetailWire Golden Rule when submitting your comments.
Braintrust
"For travelers who have arrived at the airport early, popping into a TripAdvisor store to see what to do at their destination could be fun."

"There’s a huge retail opportunity for developing review sites for consumer products. The only downside to this idea is the sheer number of products..."

"Consumers use their mobiles! Why go to the vast expenses of introducing kiosks in stores? It feels like a step backwards!"

12 Comments on "What can TripAdvisor bring to retail?"

One of my very first clients from nearly 30 years ago is still #1 in all of Orange County, CA on TripAdvisor. As I shared in this post What Retailers Can Learn From A Hotel Makeover [Case Study], that was out of more than 300 hotels including luxury properties. Yet the hotel had just 26 rooms, no pool, no concierge, no restaurant — the people still make the difference.

To this day customers love to share their experiences — it has become “their” hotel. And it is free advertising when you do a great job.

AAA used to be the authority due to their inspectors — not now, we trust TripAdvisor due to the sheer volume of reviews. I could easily see TripAdvisor expanding into retail as Yelp is mostly a restaurant review site. The opportunity is in selecting places you don’t already know. Once in the store I don’t think the brand translates to toasters or dresses.

This is a great idea for one emerging technology, automated text summarization, especially when there will be staff to help travelers search the reviews. With this summarization technology, hundreds of the thousands of reviews can be “read” instantly to automatically generate a list based on the search requests. For instance, a traveler could search for free museums open until 8 p.m. within five miles of their hotel that are wheelchair accessible and have an average 4-star rating, and instantly the technology will generate this very personalized, individualized list.

Online reviews are here to stay. Retailers need to find ways to bring them into the physical shopping environment. This can be accomplished through a retailer’s app or website, signage, etc. But while this seems easy, it means that retailers need to devote more attention and resources to online.

It seems most shoppers use their smartphone when shopping. So having a consumer reviews website which is third-party can only help the industry. It is the right step in the social retail/social selling direction. This is an interesting new dimension to another online pure-play, stepping into the omnichannel retail world. Interesting trend!

TripAdvisor is a go-to destination for me when I am searching for hotels or exploring a new destination. For travelers who have arrived at the airport early and have time to spare, popping into a TripAdvisor store to see what they might want to do at their travel destination could be a very fun thing to do. That is, if the store is done right. The consumer would be in the right mindset and you can’t do much better than that. Just enhance that experience by showing them what others did at your destination. What they enjoyed, what you shouldn’t miss. The only question I have is, how will they make money? I’m not so sure about tee shirts and water bottles. Will they also offer bookings? As for retail, I would love to see retailers step up their game at TripAdvisor. Let travelers know where to find you, let them know about special events and offer special services. I’ll be interested to see how this goes.

Online consumer reviews are very powerful — shoppers make critical purchase decisions based on reviews every day. Retailers need to find creative ways to leverage this information in-store. Amazon Books is one example of using them but not a very dynamic one. Better options may be to push content to customers’ mobile devices or to use dynamic digital signage that is context-driven at the product display. Large screens are not required, it could be done with small, tablet-sized screens. Kiosks may work in some cases but it seems unlikely shoppers want to walk away from a product they are evaluating simply to look up reviews, only to return to the product display.

There may be an opportunity for sites like TripAdvisor to bring analytics value to retailers by letting shoppers write reviews about stores on their site. There may be a service offering in the making!

There is no doubt that review sites such as TripAdvisor have for a while been an important factor in the online retail sector in particular for both consumers and retailers. Similarly so in the hospitality sector for measuring guest satisfaction. Consumers are used to using these websites to check out a service or company before they buy. However I don’t believe that having this service in the stores will add anything at all. Consumers use their mobiles! Why go to the vast expenses of introducing kiosks in stores? It feels like a step backwards!

TripAdvisor is my go-to site when I am traveling and looking for a place to eat. Reviews on the site are usually honest and straightforward. Online reviews for retail have been mainly on the retailer’s website. TripAdvisor will be one of the social media outlets changing that. Reviews will become more visible on a public platform as opposed to the in-house platform of today.

This is a smart move as we are seeing more e-commerce businesses getting into brick-and-mortar. It is another stage of the retail evolution. What is interesting is that TripAdvisor is a service and not a tangible “something” to buy. So how TripAdvisor develops the in-store concept (no doubt with very “cool” technology), what merchandise they provide partnering with third-party vendors and how they offer a great customer experience will determine this venture’s success. The store will add further awareness of TripAdvisor and attract new and existing customers who will be curious about what the store will offer. If successful, we will see other web service companies also opening brick-and-mortar locations and, most likely, finding some with a store-within-a-store plan as well, like Sephora and J.C. Penney.

Perhaps TripAdvisor can be the digital equivalent of the Michelin guide with the added dimensions of events, experiences and shopping destinations. Making this a retail store at an airport is a great way to expose and educate travelers to the capabilities.

Online consumer reviews are already part of the in-store shopping journey for many. Personally, I use my smartphone to look up reviews on any unfamiliar products I’m interested in to see how well it functions and whether it’s worth purchasing. I suspect I’m not alone in this practice. There’s a huge retail opportunity for developing review sites for consumer products. The only downside to this idea is the sheer number of products out there. The closest thing we currently have is Amazon because of the popularity of the site in addition to the extensive reviews people already write on the things they buy. Another alternative to review sites we currently have are YouTube review videos. The videos themselves typically are personal opinions and there isn’t an aggregate scoring system for each product. The difference is that you get to see the product in use typically and get a better idea of its functionality versus a written review. Overall, it’s a great concept to have a review site for retail products, but having it gain popularity… Read more »
0
|
0
-   Share

TripAdvisor is wise to extend its brand into the physical world and maybe can create brand awareness on a new level with consumers. Presently thought of as a travel sourcing site online, TripAdvisor could be seen as a local source of information and knowledge if these kiosks are successful.

One thing that worries me about the core model at TripAdvisor is the string of emails I receive informing me that I’m in the “top 10% of all reviewers.” Knowing my level of activity with the service, the message leaves me thinking that engagement on their site must be lower than I had perceived.

A key part of any business expansion or brand extension strategy is to make sure the core is solid. TripAdvisor may be well “advised” to shore up its communications online as they encourage higher engagement.

Braintrust
"For travelers who have arrived at the airport early, popping into a TripAdvisor store to see what to do at their destination could be fun."

"There’s a huge retail opportunity for developing review sites for consumer products. The only downside to this idea is the sheer number of products..."

"Consumers use their mobiles! Why go to the vast expenses of introducing kiosks in stores? It feels like a step backwards!"