What does the strong 2016 Christmas foretell for retail in 2017? 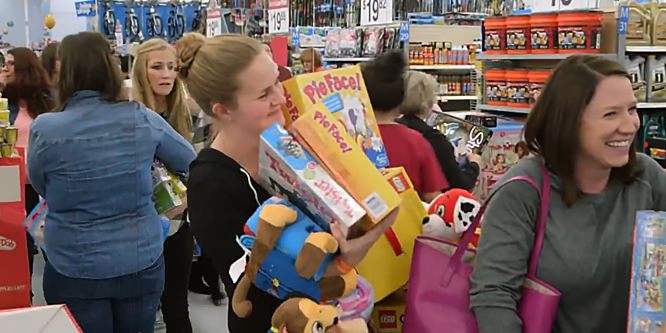 Initial reports suggest that the 2016 Christmas selling season was one for the record books. Now the question becomes, will consumers continue to spend freely in the year ahead?

Consumers spent an average of $711 on gifts and other items for the season, according to a post-holiday survey by the International Council of Shopping Centers (ICSC). That figure was four percent higher than the number projected by the ICSC back in October.

“Consumer confidence continued to improve into December and we saw this optimism reflected in the holiday spending numbers,” said Tom McGee, president and CEO of ICSC. “The strong holiday shopping season suggests a positive environment for retail sales overall.”

The research firm, Conlumino, said sales increased 3.8 percent for the season, the biggest improvement since 2011, reported USA Today. Online sellers had a lot to smile about with sales jumping 17.1 percent. Sales made in stores improved 2.6 percent.

The ICSC survey found that retailers with a mix of online and physical stores were well positioned to take advantage of consumer shopping trends this holiday season. Seventy percent of total dollar purchases were made in retailers with both a physical and online presence. Ninety-one percent of shoppers visited a store, the same percentage as 2015.

“The convergence of physical and digital continues to be important as consumers have come to expect an integrated experience allowing them to buy products through a variety of channels,” said Mr. McGee. “The survey data proves that omnichannel retailers are the real winners this season as they offer purchasing options that satisfy the shopping behaviors of all generations.”

While the retail industry as a whole did well over the holidays, there are sure to be losers with department stores and specialty apparel outlets among them.

The shift of business from stores to online will continue to pressure retailers on how best to manage their physical assets.

DISCUSSION QUESTIONS: What key insights should retailers take away from the 2016 Christmas shopping season? How do you expect retailers to translate these insights into actions in 2017?

Please practice The RetailWire Golden Rule when submitting your comments.
Braintrust
"I believe that there will be a renewed focus on executing the basics in 2017."

"Payment, inventory transparency and in-store technology integration will be important to critically evaluate in 2017."

"To start, we will see more returns in 2017. It already happened at my house this week."

The key message from the ICSC study is that 70 percent of sales were made by retailers with both an online and physical presence. This explains the trend of pureplay online retailers moving into omnichannel plays (including brick-and-mortar — Amazon, Frank & Oak, IndoChino … ).

The implication is that omnichannel commerce isn’t just a competitive advantage, it is a core necessity. The next wave is the holiday returns that have already started. For 2017, more than ever, retailers need the right technology to manage omnichannel retail. It means being prepared to provide thorough inventory visibility, let customers buy and return in an omnichannel fashion (no fees for in-store returns, for example), delivering on all six click-and-collect methods and having a robust returns technology and easy process. For 2017, getting your order management system upgraded is going to be crucial to stay competitive!

A solid holiday season is encouraging, but challenges remain for many retailers. Sales growth is good, but it’s hard to call the year a success until we understand retailers’ bottom-line profitability. One of the obvious lessons from the 2016 holiday season is the undeniable importance of the combination of online and in-store. Online and in-store are now inextricably connected and all retailers need to think carefully about how they can make the most of the opportunities this presents for them. But it’s not just about deploying cool technology — retailers still need to execute. I believe that there will be a renewed focus on executing the basics in 2017.

Retailers should know that a good Christmas shopping season is the indicator for the year to come. So all things being equal it should be a good year for retail. As long as the stock market continues to do well and people have confidence in the newly elected administration consumers will continue to spend more. There will be ups and downs but for the long haul all will be good if indicators continue as they have in past years.

To start, we will see more returns in 2017. It already happened at my house this week. The shoppers — like my wife — are becoming more particular about their needs. Meaning to our industry, tighten up assortment planning by channel.

We will see store refinement — some closings and other stores re-designed vs. closed. Malls will stay open and will re-tune for the local shoppers. In Scottsdale, Arizona the Fashion Square Mall is always loaded with people headed for dinner, movies and shopping. A beautiful mall for beautiful people. No, I do not go there much — I’m too busy and I am done being a beautiful person.

2017 will be a good year for retail as more retailers start to leverage all channels — from the simple web to mobile to the stores. Brick-and-mortar stores are not fading no matter what mobile freaks say.

While preliminary, high-level data suggests November/December same-store sales will hit the NRF prediction of 3.6 percent, I think it is too early to declare victory. I’d prefer to wait for February’s Q1 earnings calls. NPD will report week four at the end of this week, leaving the 13th month aka “Returns Week” another week away.

Some categories, some regions, some locations, some channels, some technologies … Overall it looks good and not all will succeed for a variety of reasons.

And so we continue to post, “retail ain’t for sissies!”

There are ALWAYS trillions of dollars sloshing around the global economy. Will the owners sit on it, or move it into commerce? Brexit + Trump began to break it loose.

It’s interesting that we can talk about a “strong” retail environment AND record store closings in the same breath. But that’s proof of the reality that omnichannel is now simply table stakes. I’m not sure how much homework it would take, but it would be interesting to look at sales and margin dollars per square foot of stores open for Christmas 2016 versus stores open for 2004, 2008 and 2012. Obviously this is what is driving the store closures. Sales and rent formulas that made sense a decade ago just aren’t tenable anymore. But it will always be a little more complicated than the math of rent vs. website. Malls and retailers that figure out the “experience” of shopping will prevail. There has to be a reason to get in the car and go to the mall rather than just reach for your phone or tablet. Brick-and-mortar growth of web-based businesses like Bonobos and Warby Parker will be telling. And I agree with Mark’s comment about “executing the basics.” But it will be about the… Read more »
2
|
0
-   Share

It’s always great news to have a good holiday selling season. When we look at the behavioral side, we’re seeing that 91 percent of those surveyed visited stores and 70 percent of sales were made with retailers who have both online and in-line sales channels.

I think the key takeaway at this moment is that retailers need to understand that their stores need to function more like their web and mobile channels and their online efforts need to be more store-like.

Consumers are experiencing big benefits from online retail, but it lacks soul and emotion. Stores provide robust, multi-sensory, immediate gratification, but lack the data we glean from online.

Fine tuning both sides of the equation so they align with consumers will be key. Payment, inventory transparency and in-store technology integration will be important to critically evaluate in 2017.

As we used to say, “when the salmon are running” … take advantage of the mood. But it feels temporary to me. We really haven’t “fixed” anything. Retail is still in a very liquid mode, especially physical retail. I think people are just so relieved to have that election over with that getting on with their lives just feels really good.

My message to retailers would be: keep innovating and move faster than you think you should move — we’re not there yet, or even close, but the 900 lb. gorilla is.

Wow! Topics all over the place in this thread.

2) The world is moving increasingly online, so yes we’ll see more store closings: Macy’s announces its death list of 100 (or more) stores tomorrow, and every day is a potential day for sears to flatline. The big issue is whether or not there will be some turning point where we see mass closings from everyone, or just the continued attrition we’ve had for the past decade.

No surprise that sales are up. The economy is reasonably healthy and retailers discounted like crazy. The real question is whether margins yielded any profits, or at least any uptick versus last year. My bet is that profits were, at best, flat YOY.

“Retail is detail” and as such, “the devil is in the details” on this result. As others have commented, being channel right and evolving your retail offering by channel (including blending the channels) was the key to success, as not everyone was successful. The retailers that continue to evolve to the consumer demands certainly seem to be the best positioned to take advantage of a more optimistic retail environment in 2017. While that is stating the obvious, what’s not so obvious is how fast you have to change to keep up. Fasten your seat belts.

The toughest thing to do to address the perennial challenges, like inventory visibility, demand forecasting, returns, etc. is to determine the right tools for them. I see 2017 moving even deeper into true machine learning/cognitive technology capabilities to leverage “dark data” that is invisible to most retailer systems in order to capture new insights never before achievable.

Aggregate retail continues to grow, but many retailers individually find it hard to grow. Competition will continue to increase, driving down prices of goods. Retailers need to invest in projects that provide real growth in things like web traffic to acquire new customers. Many, though, focus on projects aimed at keeping up with the Jones’ versus truly growing the business with new customers and increased share of wallet.

Braintrust
"I believe that there will be a renewed focus on executing the basics in 2017."

"Payment, inventory transparency and in-store technology integration will be important to critically evaluate in 2017."

"To start, we will see more returns in 2017. It already happened at my house this week."