What will more electric cars mean for convenience stores? 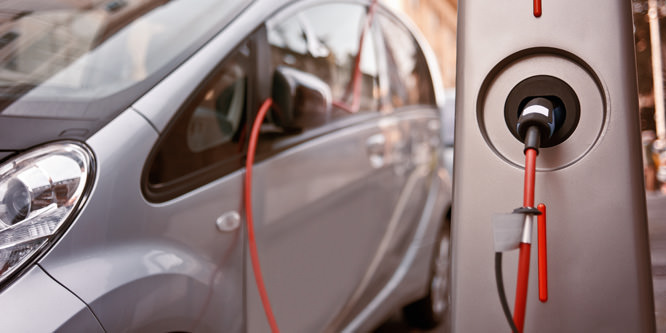 As much as convenience stores have come to resemble grocers and restaurants over the past decade, gas remains an integral part of much of the segment’s business model. In a NACS survey last year, 68 percent said fuel sales were up due to low gas prices and that gas was drawing store traffic. But some in the industry anticipate that shifting trends in the ways that customers fill up could mean big changes for their businesses in the years ahead.

Electric cars and other electric vehicles are only in the early stages of adoption, but an article on CSP Daily News notes projections that a quarter of cars sold will be electric by 2025. The popularity of Tesla’s cars and the impending release of a Volvo electric model in 2019 indicate that the electric car revolution may be coming on fast, meaning convenience stores may have to reshape fuel offerings to cater to these needs.

Envisioning gas-dependent convenience stores pivoting to act as charging stations is tough, partly because the best way to effectively charge an electric car is still being hashed out by the industry. This is especially true when it comes to providing drivers with charges during long trips.

Electric vehicles, as they now function, require markedly more time to charge than the brief in-and-out trip required to fill up with gas. For instance, the chargers set up at a few Dunkin’ Donuts locations in Pittsburgh, as reported in PowerSource, average 30 minutes to provide an 80 percent charge.

The increased dwell time charging could, as pointed out in the CSP Daily News article, mean opportunities for convenience stores to provide full entertainment experiences instead of fill-in grocery trips.

Given that electric car owners often like to charge overnight could lead to the emergence of a charging infrastructure independent of convenience stores and gas stations. In that case, convenience stores, especially ones which cater primarily to long-distance travelers, could have difficulties filling the gap.

Please practice The RetailWire Golden Rule when submitting your comments.
Braintrust
"Growth in convenience store sales rests more on assortment than on type of vehicle."

"Rather than having racks of Funyuns, spaces for people to stop, take a call or get some work done while they top off their charge will be paramount..."

"I see more potential for hydrogen fuel cell cars...convenience stores across the country can put in hydrogen refilling as part of their mix..."

13 Comments on "What will more electric cars mean for convenience stores?"

I just don’t see this as being an issue for many years, as electric car sales are very, very low. Until these vehicles get 400 to 500 miles between charges, and are priced to sell to the middle class, the convenience stores have little to worry about. I see more potential for hydrogen fuel cell cars as they emit water, which is a win for everyone, and the convenience stores across the country can put in hydrogen refilling as part of their mix which would bring extra profits to the stores, whereas electric vehicles will not.

This is a great opportunity for convenience stores! Gas stations can adapt by offering a comfortable indoor waiting area, reliable free Wi-Fi and more fresh, ready-made food for electric car drivers so they feel welcome to kill time in their retail space. I can envision Sheetz and Wawa making the pivot very easily. Perhaps an app for electric car drivers along the lines of GasBuddy could show a map of all electric car charging stations and offer location-based discounts to encourage in-store conversion.

Eventually I hope that electric charging becomes the norm but, until then, capitalizing on electric car drivers’ needs gives convenience store owners a chance to engage a lingering customer by offering them an experience they can’t get somewhere else.

Electric cars will only succeed if they are at least as convenient as traditional cars. Having to wait around for more than a reasonably short length of time while the vehicle charges will simply not be acceptable to most people. While some European countries may impose electric vehicles before the technology is fully optimized, I thankfully cannot see this happening in the US on a widespread scale. Sure, some states (over-regulated California and New York) may attempt restrictions, but I think they will ultimately prove to be unworkable. As such, traditional gas stations will likely be safe for quite some time.

Quite simply, I don’t see internal combustion vehicular transportation diminishing measurably in the next two decades at the very least. People still want the ability to refuel/recharge quickly, and even the fastest chargers can’t compare to current refueling times for gasoline. And there are still too many drawbacks to electrics like expensive battery replacement costs and rare earth element strip mining. I’m actually disappointed that the planet is excited about electric cars that have been around for more than a hundred years. I still think hydrogen is the way to go. Clean, limitless and versatile. Mass adoption would drive costs down even further.

There three factors that come to mind that may lessen the impact of electric cars on c-stores for many years.

The first is that the rate of car replacement has slowed as cars are better built and last longer. This lessens the need for a new car — gas or electrically powered. The second is the generally higher cost of electrically powered or hybrid vehicles. As the technology surrounding batteries develops and production ramps up the cost are likely to diminish but the question of when is still unknown. The third is, as Tony noted, the range of the vehicles has to be be such that people feel comfortable that they will not find themselves stranded. Admittedly for commuters this is an unlikely scenario, but has been voiced as a concern.

One final note. I have seen several studies predicting different time lines for the growth of electric cars. The time range vary significantly.

To me, growth in convenience store sales rests more on assortment than it does on type of vehicle. When will c-stores catch up and cater to shoppers who want better quality, nutritious food? It’s a nightmare to be on an extended car trip (which I am) and struggle to find any options for nutrition beyond an occasional sleeve of unsalted nuts.

Agreed! One can only eat so many Clif bars before driving off said Clif.

The winners here will be the new entrants in the space who can tap into what customers want: electric charging (with high amperage and DC fast charging) combined with spaces that are more tuned to a longer fueling stop. For example, rather than having racks of Funyuns, spaces for people to stop and take a call or get some work done while they top off their charge will be paramount. Additionally, moving away from rotating hotdogs and more into a QSR model (like they have in many parts of Europe) will further enable c-stores to capture charging dollars that otherwise might only be spent at home.

It wasn’t that long ago that smartphones were only starting to pop up. So don’t be surprised if electric cars become closer to the norm, and much faster than expected.

For the proactive convenience store, this represents a potential big win in the near future. There’s gold waiting to be generated from customers who are recharging their vehicle and need to spend 15 to 20 minutes in the store! Just imagine the possibilities of creating a great experience for them that they would not just enjoy — but would also seek out.

So what convenience store is going to be the bold one and go first?

We haven’t hit a tipping point with electric cars, but it is on its way in the not-too-distant future. I’m predicting it will happen by 2020. Electricity is a disrupter to the fuel industry. So just like any other industry that has to adapt to new technologies, it’s time to innovate.

As electric cars become more dominant, convenience stores will have to shift their focus to product assortment inside the store rather than relying on fuel to attract customers. Unless the charging time is reduced to mere minutes, I don’t see the attraction most c-stores can have to encourage an electric car driver to wait 30 minutes in a c-store.

The whole point to this type of shopping is “in and out” and that’s lost with electric car charging. Certain brands, Wawa and Royal Farms come to mind, may adapt as they have increasingly focused on fresh food and may start to look more like QSRs in the future. Perhaps we should be asking ourselves the question, what will the QSR industry do as there are more electric cars out there? The competition may become quite fierce!

Although I do believe that there will be some impact to the c-store business as the technology with these vehicles advance, any significant impact would be many years down the road. My background is within the c-store industry and while we did add approximately five Level 1 charging stations several years ago, they saw little to no use whatsoever. In 2016 the company then added seven Level 3 charging stations (more powerful, faster charge) with a bit more interest, and only slightly more usage. Part of the underwhelming usage may be a result of geography — all chargers were within the Southeastern United States, a traditionally slow to adopt group of folks. All of that said, I don’t think it is a bad idea for c-store retailers to dip their toe into the electric charger market, however, diving in head first would be a mistake, in my opinion. I feel that the best course of action is to wait and see. With the speed of technological advances there could be, as the original article suggests,… Read more »
1
|
-1
-   Share

Braintrust
"Growth in convenience store sales rests more on assortment than on type of vehicle."

"Rather than having racks of Funyuns, spaces for people to stop, take a call or get some work done while they top off their charge will be paramount..."

"I see more potential for hydrogen fuel cell cars...convenience stores across the country can put in hydrogen refilling as part of their mix..."