Are convenience stores in for a big year in 2017? 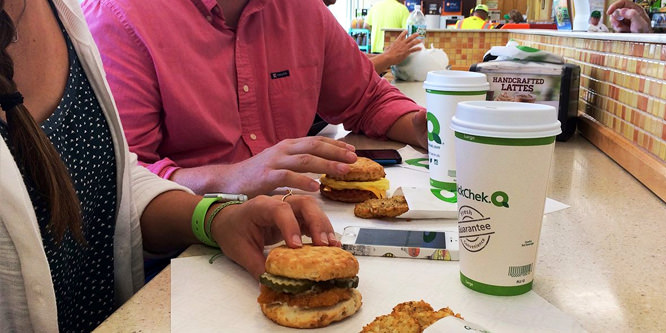 Convenience store operators are feeling pretty good about their prospects in 2017, that according to the quarterly Retailer Sentiment Survey by NACS, the association for convenience and fuel retailing.

The optimism expressed by c-suite executives is the result of a combination of factors, including low fuel prices and improvements in foodservice operations that drove gains in 2016. Sixty-eight percent said sales of fuel had increased as lower prices at the pump brought more shoppers to their stores. The combination of more shoppers and better execution led to a jump in foodservice sales, with 63 percent reporting an increase last year.

C-stores also benefited from a greater emphasis on “better for you” foods such as fresh produce, health bars, nuts and yogurt. Sixty-three percent of those responding to the survey said sales of these products improved in 2017. Only one retailer who responded said “better for you” sales were down last year.

Optimism about the economy is way up among c-store retailers. Seventy-nine percent, a 26 percent leap from the previous quarter according to NACS, are optimistic about the country’s economic prospects.

Retailers report investments in technology, particularly those focused on loyalty and better customer experiences, are key to growing sales. Investments made in food and beverage equipment are also said to be producing positive returns for stores.

And yet c-store executives do have concerns. Fifty-five percent expressed unease about regulations and legislation. Labor has also become more of a worry for c-store management. Fifty-three percent said they are concerned about labor issues, up from only 41 percent a year ago.

Republican control of the executive and legislative branches of government in Washington may help ease some of the worry c-store executives have about regulations and labor. President-elect Donald Trump and GOP legislators have identified regulatory rollbacks as among their highest priorities.

Mr. Trump has also nominated Andy Puzder as his choice for labor secretary. Mr. Puzder, chief executive of CKE Restaurants Holdings, the parent company of the Carl’s Jr. and Hardee’s, has been a vocal critic of raising the federal minimum wage above $9 while pushing back against the Affordable Care Act and executive orders issued by President Obama seen as favoring employees over employers.

DISCUSSION QUESTIONS: Will 2017 be a big year for convenience stores? What do you think are the keys to the industry achieving sustainable growth this year and beyond?

Please practice The RetailWire Golden Rule when submitting your comments.
Braintrust
"The attention given to the overall customer experience has positively reshaped the segment."

"I think the biggest opportunity on the horizon for c-stores is a combination of increased consumer satisfaction and an answer to their labor concerns."

"Oh, and let’s not forget fuel. The forecast for 2017 is for higher fuel prices and, although it is continuative, this will mean lower margins."

I think most c-stores are doing a great job evolving with their audience, with merchandise selection and more self-service options — in-store and at the pump. They do not face nearly the same competitive pressures as the rest of retail. So yes, 2017 will be a good year for c-stores.

Bear in mind that supermarkets are simply convenience stores with poorly-managed big long floppy tails! So the c-store is properly the dominant brick-and-mortar store of the future, at probably two to three times the size to provide more food service and selected access to the long tail of merchandise.

Disclosure: It’s been my goal for some time to help someone build the first “million item” c-store chain. I have a patent pending on “The Long Tail Accelerator,” a device/method designed to permit the SKU offering to balloon from a few thousand SKUs (now) to hundreds of thousands of SKUs without increasing shelf space. I call this the Convergence of Online, Mobile and Bricks (COMB) retailing and I see it as a major part of c-store’s wave of the future.

All the channel blurring these days leaves it sometimes difficult to define new formats in black and white terms. I think a smaller footprint is key for “convenience stores” to remain convenient. And also a healthy dose of technology: mobile-enabled endless aisles, personalized content, just-walk-out technology and many other solutions coming to market can help these formats live up to their name. Done right, there’s plenty of room for sustainable growth in 2017 and beyond.

Convenience stores will gain increased visit frequency and weekly share of wallet as the definition of c-store expands and the quality of food offerings improves. Consumer mobility and the offer of consumables (beverages, lottery, snacks, etc.) are their strengths. And we should not be surprised to see c-stores become the new drop-box or ship-to location as e-commerce increases. Profit-hungry c-stores can adapt to merchandising approaches very quickly with supplier support to make an in-store visit from gas pumps more compelling.

The momentum within the c-store market segment will undoubtedly continue to accelerate throughout 2017. Not only have consumers recognized and gravitated toward their convenience and expanded breadth of product offerings, but also the attention given to the overall customer experience has positively reshaped the segment. Dollars once spent in the grocery segment are now being driven to c-stores and prepared foods previously held captive by fast food chains have migrated to expanded selections and more reliable choices within the c-store channel. I’m bullish about their continued growth and I envision a big year in 2017 and beyond.

C-stores are definitely on-trend, increasingly relevant and improving their core offerings (including food service). This all has to bode well for the segment in 2017.

But I think the biggest opportunity on the horizon for c-stores is a combination of increased consumer satisfaction and an answer to their labor concerns. It all starts with some scaled-down version of the virtual transaction concept of Amazon Go. Costs will come down and functionality will be scaled back to the ones consumers value most. All that will lead to increased accessibility to the technology for c-store operators and, more importantly, increased “convenience” for consumers in the c-store experience.

The second benefit is what operators can do with the labor hours freed up — and that is to apply them to food service. Beyond that operators could add additional service categories. Why shouldn’t there be a Verizon Store in the c-store? Or a UPS Store? There will most likely be Amazon drop lockers there soon anyway. Time to get creative!

The convenience sector is one of the few where brick-and-mortar holds structural advantages over online so the sector remains well positioned for the future. The fact that Amazon is opening a convenience store only serves to further the point. Those operators who keep their formats and assortments fresh should win.

Agility is key for c-stores. Matching the personalized shopping experience that innovators in other retail formats are achieving is a great first step to driving new growth this year. Streamlining assortment and increasing overall inventory turns is also a way to be more agile.

I agree c-stores are looking for a good 2017. However, the c-store industry faces numerous competitive threats. The drug store chains are increasing their emphasis on their c-store offer. True, CVS stopped selling cigarettes, but Walgreens is getting back in the beer market. The same is true for the dollar store industry. They are positioned as less a treasure hunt than previously. They are now evolving more towards the c-store model only without gas. QSRs who previously treated drinks as an ancillary sale to their protein offer and now placing an increased focus on drinks sales, as evidenced by McDonald’s current coffee campaign. Oh, and let’s not forget fuel. The past two years’ fuel margins have been more robust than in the past. Eighty percent of c-stores sell fuel. It typically constitutes two thirds the revenue of a site but only one third the profits. The last two years has seen the decline as a percentage of sales (the impact of lower retails), but a higher percentage of a site gross profit. The forecast for… Read more »
2
|
0
-   Share

C-stores should be in for a good 2017. As long as you can get your beer, coffee, cigarettes sodas or lottery tickets when you get gas, they will continue to grow. Learning to have better food products will be a big plus. Oh, by the way, better trained staff will not hurt at all.

C-stores have come a long way in terms of product selection and pricing. They are designed for impulse purchase so less susceptible to e-commerce competition, especially in the ready-to-eat and mobility related items. I think as consumers go more towards “instant satisfaction” the future of the C-store is bright.

Braintrust
"The attention given to the overall customer experience has positively reshaped the segment."

"I think the biggest opportunity on the horizon for c-stores is a combination of increased consumer satisfaction and an answer to their labor concerns."

"Oh, and let’s not forget fuel. The forecast for 2017 is for higher fuel prices and, although it is continuative, this will mean lower margins."