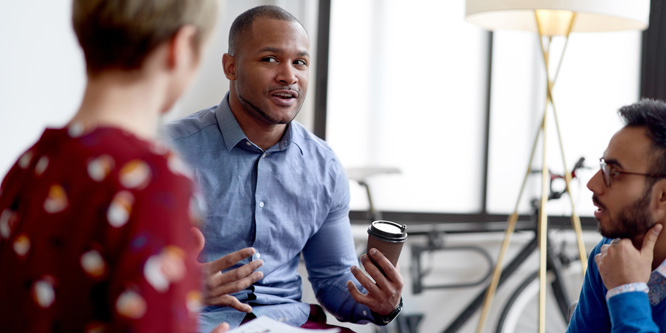 In June, Wells Fargo’s CEO Charlie Scharf set ambitious goals to expand Black leadership and tie executive pay to diversity goals. However, his claims that a minority talent shortage was impeding diversity progress eventually led to a backlash, an apology and broad introspection.

“While it might sound like an excuse, the unfortunate reality is that there is a very limited pool of black talent to recruit from,” Mr. Scharf wrote in a memo reported at the time by Reuters and Bloomberg.

The uproar arrived on Sept. 22 after a Reuters report indicated Wells Fargo employees were “exacerbated” by the comments that he repeated in a Zoom call over the summer. The next day, Mr. Scharf apologized “for making an insensitive comment,” which he said reflected his own unconscious bias.

Critics feel a perceived lack of qualified candidates is a common excuse for diversity shortfalls and for failing to nurture an internal talent pipeline. While 22 percent of Black Americans have a bachelor’s degree or higher versus 37 percent of whites, just three percent of executive or senior-level roles across America’s top 500 companies are Black.

Mr. Scharf received some praise for being transparent about the challenges. Many hope the heightened discussions over race this year play a large role in supporting career advancement for minorities.

“We want to have realistic expectations. And we want to keep everyone engaged,” said General Motors’ CEO Mary Barra about her company’s inclusivity challenges at Fortune’s virtual Most Powerful Women Summit. “Part of this is being vulnerable, and sharing that, you know, we don’t have all the answers.”

On Wednesday, Starbucks became the latest company to elevate its diversity goals by mandating anti-bias training for executives and committing to tying compensation to increasing minority representation in its workforce.

DISCUSSION QUESTIONS: What glass ceiling challenges must Black employees deal with that may be different from those facing women or other minorities? What solutions do you see?

Please practice The RetailWire Golden Rule when submitting your comments.
Braintrust
"Change has to start at the lowest levels to make it sustainable. "

"Until we make a sincere effort to understand and accept that people are different and that different does not mean unequal, all such efforts are going to fall short."

"I work with business partners who are specifically diverse-owned businesses. This is absolutely all around unconscious bias."

8 Comments on "What’s holding back Black advancement to leadership roles?"

First there should be an acknowledgement that there is a significant underrepresentation of Blacks in the leadership roles.

My point is if the feeder systems are not representative, it is a legitimate claim that there isn’t enough of a talent pool to choose from. This is not to ignore institutional racism that exists. But it is an acknowledgement that change has to start at the lowest levels to make it sustainable.

Equally important is the need for role models. To that extent, corporations need to look deep in the ranks to identify and nurture the talent to promote. It is not easy and could lead to resentment when it isn’t perceived fair.

One more thing executives need to do, especially at large corporations, is step aside. Symbolic gestures of urging subordinate hiring managers far removed from the top to do better is great. But true progress will be achieved when a C-suite leader gives up their own role for a person of color. Otherwise this is “do as I say not as I do” behavior. And simply creating new executive roles to fill them with minorities doesn’t count. It’s cliche but true. The best leaders lead by example.

Suresh nailed it. To quote him…”My point is if the feeder systems are not representative, it is a legitimate claim that there isn’t enough of a talent pool to choose from. This is not to ignore institutional racism that exists. But it is an acknowledgement that change has to start at the lowest levels to make it sustainable.”

This isn’t just a U.S. issue. If one looks at countries across the world, the determinant of those countries moving from being stuck in the idle to becoming high income countries is their “feeder system”. It is about preparation. “… that change has to start at the lowest levels to make it sustainable.”

Change has to come from the top, which includes mentoring, training and mandates backed by metrics. If not, the problem is institutional and change will occur at glacial speed if ever.

Two comments: First, to place the blame on the “feeder system” suggests that companies aren’t trying hard enough or looking in the right places. Not to pick on Wells Fargo, but are they recruiting at HBCUs, not just the “usual suspects” of the Ivys or top-tier state universities? Are they partnering with HBCUs to endow strong B-school programming in order to develop that feeder system?

Second, it’s a top-down issue not just a bottom-up issue. If companies aren’t modeling success in their own organization by recruiting people of color to their top ranks — not just their training programs — they aren’t providing enough role models to have a meaningful impact. Systemic inequality isn’t a given if employers try harder to combat it.

The issue of institutional racism is real. Solving it requires introspection and insights into what it is about a company’s culture that might be supporting these systems. It also requires courage to enact policy to dismantle them.

I have worked for companies that put a high emphasis on recruiting and hiring diverse talent, which for the most part were effective. As mentioned here, we fell short on retention and support of our employees and turnover was high. This issue has to be considered holistically, from the first training class to the retirement party.

We don’t have answers today, and the conversation is long overdue. But as they say every journey starts with the first step. Personally, I’m more hopeful now that these conversations will result in real change than I’ve been in my long career.

I work with business partners who are specifically diverse-owned businesses. This is absolutely all around unconscious bias. I recommend all people in retail read, “The Person You Mean to Be” by Dolly Chugh. It’s about how “Good People Fight Bias.”

This runs deep. It’s not just one thing, it’s a collection of things: economic advantages–or disadvantages–that inform access to good colleges and universities; those alumni associations and professional networks then perpetuate internal elevation (not very mindful that so many have not yet gotten in). It’s bias in resume reviews–judgment begins with the name on top of the resume (does the name “sound black”?). It’s letting talent acquisition off the hook when they say “there just aren’t any qualified black candidates” because they too are checking their networks and using benchmarks of candidates that come from different backgrounds and education. It’s sustained and unchecked bias in hiring decisions. It’s not unconscious. People are generally more comfortable with people who look like them and those that have cultural/economic similarities. It’s all of these things. Prospective black employees walk in the door with all of these challenges as head-winds. Very few people understand this. Least of all the well-intended but grossly unaware CEOs trying to make bold statements toward diversity that end up as shallow, one-off symbolic hires… Read more »
6
|
0
-   Share

Braintrust
"Change has to start at the lowest levels to make it sustainable. "

"Until we make a sincere effort to understand and accept that people are different and that different does not mean unequal, all such efforts are going to fall short."

"I work with business partners who are specifically diverse-owned businesses. This is absolutely all around unconscious bias."