When customers think Casey’s, will they think community? 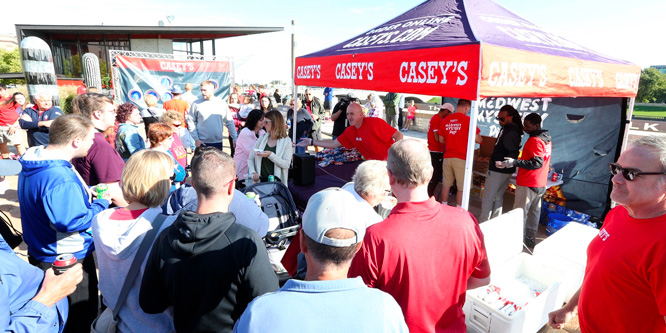 Convenience store chain Casey’s General Stores considers itself committed to the communities that it serves and is upgrading its branding to make that better known.

The chain is launching a new campaign pegged around a new “Here For Good” tagline, according to a press release. The new branding is meant to reflect the position that the chain holds in the towns and neighborhoods where it has a presence. Casey’s General Stores currently has 2,000 locations in 16 states, making it the fourth biggest convenience store chain in the country.

The chain highlights some of its community-focused endeavors on its website, stating that it is often at the center of community events in the small Southern and Midwestern towns where most of its stores are located. The chain is a member of the Chamber of Commerce in many of these areas and offers financial support to school and community initiatives and betterment projects, in addition to donating to and fundraising for a few national charities.

The new branding comes as Casey’s General Stores takes steps to keep up with other big trends in the convenience store space, such as the increased use of technology to meet customer needs.

In June, the chain launched a BOPIS feature to its online presence which also cross-sells to customers on each product selection, announced the impending launch of a smartphone app for pizza ordering and announced other high-tech enhancements on the way such as in-store touchscreen kiosks, according to a Radio Iowa report.

Casey’s General Stores has also gestured at a plan to increase its footprint. In fact, it was recently on the verge of a major expansion. In early 2018, the chain made a bid to purchase the 783 convenience stores Kroger jettisoned when it sold off its convenience store operations. U.K.-based EG Group ended up acquiring Kroger’s assets instead.

Casey’s General Stores recently announced an impressive quarter as reported on Seeking Alpha, though the improved margins were attributed largely to fuel sales rather than store operations.

DISCUSSION QUESTIONS: How important is it for chains to communicate the part they play in the community, and what else might a chain like Casey’s General Stores do to back up the message? Are c-stores in a better position than most retailers to portray themselves as a community hub?

Please practice The RetailWire Golden Rule when submitting your comments.
Braintrust
"For local stores focusing on community is a point of differentiation. However, it does not negate the need to ensure high retail standards and provide good value for money."

"The question is whether Casey’s customers see them as a pillar of the community. In this case, Casey’s has a pretty solid foundation..."

"It’s hard for a national chain to create a local presence. Those that can do it give themselves a “local advantage.”"

7 Comments on "When customers think Casey’s, will they think community?"

For local stores focusing on community is a point of differentiation. However, it does not negate the need to ensure high retail standards and provide good value for money – both of which remain critical. Casey’s is a constant investor in its shops and proposition so, for them, this campaign should do well.

This gets at the heart of the matter. I am senior planner for a study on a public market. The vendors, because it’s a public market building owned by the city, by definition believe that they are central to the agriculture system and the community, but they aren’t ensuring high retail standards, providing good value, or even all that involved in the community (most of the vendor-owners live in the suburbs, although some of the workers do not).

WRT this Casey’s initiative, I don’t live or work in areas that they serve. But as a “community resident” I would argue that contributing to these kinds of efforts: “Autism, Down Syndrome, Juvenile Diabetes, Breast Cancer” aren’t particularly community specific.

Those are important charities, sure.

Similarly, some new Shoprites and some Tescos in the UK, provide meeting room space usable by community groups for no charge. That is a community support, etc.

The question is whether Casey’s customers see them as a pillar of the community. In this case, Casey’s has a pretty solid foundation, so the campaign should ring true with their shopper base. But they still need to provide services to keep up with competitors; being the home town favorite only works if you show that you are dedicated to maintaining that advantage.

It’s hard for a national chain to create a local presence. Those that can do it give themselves a “local advantage.” Applebee’s did a good job as the “Neighborhood Grill and Bar” – promoting the local presence. When you can create community involvement, rather than just community presence, you have a chance at being seen as more of a local retailer than as a big chain. Combine that with local/easy-access convenience (which is why they they call it a convenience store) and you have a good combination to help stand out from other local competitors.

Yes, customers will think Casey’s because they already do. In its core, small town markets, Casey’s is the convenience store, the grocery store and the pizza place. This has been a purposeful strategy since its inception. The new campaign serves to remind folks in existing markets and helps to build equity as Casey’s expands into new territory. They are doing this while making further improvements to how they connect with and serve customers. Great move.

Casey’s should be applauded for its community focused endeavors. Its efforts mirror those of Wawa, a leading regional C-store with over 800 locations. Wawa welcomes its customers to the Neighborhood. It states, “…we don’t have customers. We have neighbors. And being a good neighbor is part of who we are.”

In addition to the Wawa Foundation, the company is involved in neighborhood issues like Autism, Down Syndrome, Juvenile Diabetes, Breast Cancer and many more deserving charities. However, for these events Wawa does not simply donate needed refreshments, it sends teams of associates, who volunteer their time for the good of their neighbors.

People want a place where they feel they belong when they walk out of their home. As more national chains continue to centralize it opens up an opportunity for B and C stores to localize and earn market share. Execution on the local level will take a strong marketing plan. Large corporations typically don’t split hairs over a bottoms-up plan; here, it’s imperative for success.

Braintrust
"For local stores focusing on community is a point of differentiation. However, it does not negate the need to ensure high retail standards and provide good value for money."

"The question is whether Casey’s customers see them as a pillar of the community. In this case, Casey’s has a pretty solid foundation..."

"It’s hard for a national chain to create a local presence. Those that can do it give themselves a “local advantage.”"