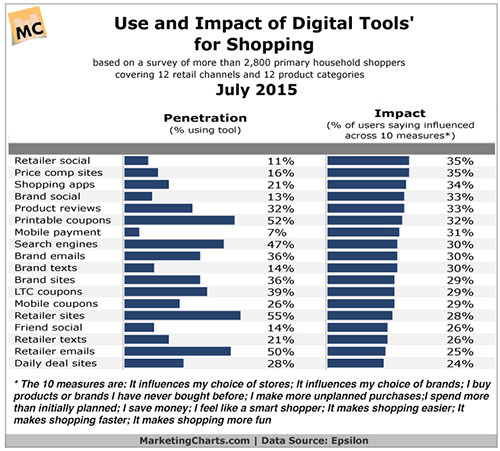 Retailer sites, printable coupons and retailer emails are the most commonly used digital tools by online shoppers, though they’re not the ones wielding the greatest impact on shoppers’ journeys, details Epsilon in a recent study.

The report, based on an online survey of more than 2,800 respondents, determined an impact score for each tool by averaging the percent of its users saying the tool has influenced them across 10 areas. Those areas range from influencing choices (e.g., "it influences my choice of stores," "it influences my choice of brands") to impulse buying ("I make more unplanned purchases," "I spend more than initially planned") and utility (e.g., "it makes shopping easier," "it makes shopping faster").

Interestingly, the digital tools with the highest overall impact score were retailers’ social media activity and price comparison sites, although they had relatively low penetration rates. Shopping applications, brands’ social media activity and product reviews were also among the most highly rated by their users. The influence of product reviews has also been noted in a separate recent study of e-commerce behavior, in which online shoppers cited them as important content on retailer websites and in retailers’ shopping apps.

Some tools may have had low average impact scores but rank better in certain criteria. For example, retailer e-mails ranked higher in influence than in utility or overall impact. Indeed, recent survey results suggest that they are useful promotional vehicles, with e-mails offering free shipping and those offering discounts being the most likely to prompt shoppers to shop at a retailer.

Meanwhile, the Epsilon report notes that the average influence of the digital tools identified has grown markedly from the previous year, with influence in this case referring to the degree to which they have swayed respondents’ shopping and decision-making behavior. Utility scores (improving the shopping experience) have remained generally flat, with several tools (including websites and e-mails from both retailers and brands) actually receding in perceived utility.

Notably, social media emerged as a top influencer of product trials, as three types of social activity were among the top five:

Those results are support by a recent study from Nielsen, which indicated that social media posts are a growing source of new product awareness.

What is your analysis of what the Epsilon survey reveals about the digital journeys of shoppers? Why do you think social (retail, brand, friend) appears to be underutilized despite its apparent usefulness to consumers?

Please practice The RetailWire Golden Rule when submitting your comments.
Braintrust
"The study certainly suggests that shoppers continue to trust the broader social community for direction and recommendations over any insight and/or information supplied by the seller — brand or retailer. The mistrust and rift between shoppers and most retailers and brands is inherent in the art and science of shopping."

"Looking at another perspective, there are some interesting findings in a Forrester Research report showing that mobile coupon redemption is skyrocketing by 141 percent."

"Retailer social and brand social are not only the most influential, they made the greatest leaps in influence over the last year in the study. But this is a bit misleading of the ~12% using the tools, only about a third say they had any influence whatsoever over 10 different areas."

The study certainly suggests that shoppers continue to trust the broader social community for direction and recommendations over any insight and/or information supplied by the seller — brand or retailer. The mistrust and rift between shoppers and most retailers and brands is inherent in the art and science of shopping. Selling and shopping are like the black and white pieces on a chess board. Any communication and/or message created and delivered by the retailer or brand is suspect. On the other hand, insights and comments from the shopping community are considered trusted sources. They’re on the same team and not the opposition. Retailers and brands have known about this reality for years but have either ignored it or in some cases proactively tried to limit access to price comparison sites and consumer reviews in the store while the shopper is on her journey. Retailers and brands should embrace this reality and understand that good quality, prices AND customer service and experience are extremely valuable. Attention to the entire process will be rewarded in the court of… Read more »
0
|
0
-   Share

Looking at another perspective, there are some interesting findings in a Forrester Research report showing that mobile coupon redemption is skyrocketing by 141 percent. People are definitely warming up to social retailing, especially internationally. We are just a bit slower to adopt it widely in the U.S. The key for merchants and brands is to be omnichannel. Be everywhere until the social outlet wars (Facebook vs. Twitter, etc.) settle down.

What is meant by shopping apps?

Is this a product advisory tool for example?

I think it’s underutilized because retailers are only publishing and doing marketing-type activities instead of engaging with customers one-on-one in direct conversation on social. Also, retailers have not focused yet on leveraging PROACTIVE social engagement. For example, if a shopper is influenced by their friends’ social activities, brands have the ability to listen to these conversations and proactively engage, but there are only a handful of retailers who are doing this and doing it well. Digital native companies (e-tailers) are on the forefront of this while traditional brick-and-mortar brands are lagging. Time to wake up to social engagement!

This sounds like another example of consumers being out ahead of retailers and brands. Perhaps unconsciously, but the notion that social is bubbling to the top makes me think consumers are allowing themselves to be influenced by emotional suggestion and the halo effects of context.

I would like to see this area more deeply explored. How and why does social out-score price and promotion? Do consumers trust their guts more than deals and price promotions?

Daily deal sites are the rock bottom of impact, yet Walmart is playing catch up with Amazon by creating a bunch of daily deals in July while Prime customers are likely to take notice and keep going back to Amazon even more.

When we are discussing the means to communicate to the e-commerce customer for the purpose of making them “aware” of anything and everything, today’s market has no surefire means outside of word of mouth as controlled by the consumer. This is a poor showing for the digital marketing and sales mavens of today. One of the perpetuators of this dilemma is the continuing shrinkage of freelance interaction with consumers as a group or individuals. Company executives spend billions of dollars to create an artificial intelligence application that will satiate consumer searches and stimulate interest as well as sales. While this is necessary, part of the cost remains as a forced technical abandonment of today’s consumer through the use of redeployed corporate budget funding. Customer service as recognized and expected from the client perspective must supersede everything outside of safety/security and business continuity. We simply must be there for the customer with whatever the most reliable means of communication available there is within the company’s means of ownership and use. In short, if the company’s IT… Read more »
0
|
0
-   Share

It is obvious that consumers are trending more and more toward websites, digital marketing and social media. I can’t understand how any retailer would sit on the sidelines to determine if they should participate. If you are a retailer still wondering if digital and social is a viable strategy… Wake up!

And social is about interacting and engaging with customers—not just reacting or responding. The most underutilized social media tool, other than not participating at all, is proactive engagement.

Thanks for this great study—I think the importance of social can be summed up the following hypothetical comment:

“I remember reading in the Jacobson biography of Steve Jobs that he spent a great deal of time, in the case of buying a couch, years, figuring out the critical attributes in a product so when I had a somewhat chance conversation with someone regarding the mattress Steve decided on, I took the chance and bought it, it wasn’t the most expensive in the high-end category but it has absolutely been incredible—I was so lucky to find out about this niche company.”

Okay, so that was a lot of words, I had to tell the story, but a real story, can serve as an incredible proxy for making a purchase—that stuff happens all the time on the web.

Regarding the impact on the journey, I’d say every retailer really needs to do journey maps by persona, use case/context—it’s 2015—you don’t have to have this down and it’s a sexy job folks on your staff would love to do.

The Epsilon survey highlights key areas where retailers can focus their efforts to extend reach and have greater impact on influencing consumer purchase decisions through making retail social, brand social and mobile payment an integral part of a shopper’s digital journey. The “retail social” and “brand social” results indicate to me that consumers want to engage with retailers and brands. They are looking for validation through conversation versus having information pushed to them. Retailers and brands can amplify their social reach by creating high quality, relevant and personalized content tailored to social networks, e.g. Twitter, blogs, Facebook, Instagram, Pinterest, etc. Leveraging sharing tools and “follow” buttons on retail and brand social sites, especially those created for mobile, can help increase penetration percentages and improve the impact on purchase decision making. Mobile payment is another area of focus that can greatly enhance retailers’ ability to influence purchase decisions. Consumers want easy, frictionless ways to pay for purchases using their mobile phones. While the mobile payment industry is still evolving, retailers who offer safe, secure and easy… Read more »
0
|
0
-   Share

Retailer social and brand social are not only the most influential, they made the greatest leaps in influence over the last year in the study.

But this is a bit misleading of the ~12% using the tools, only about a third say they had any influence whatsoever over 10 different areas. This includes choice of stores, brands, trial, spend, fun, speed, planning, saving, and feelings about shopping.

In other words, not much influence at all.

Breaking down the survey participants, even Millennials said none of the social tools (and none of the other tools) had influence on 30% or more of them.

Sometimes the variation in relative data leads us to draw conclusions that are confounded by absolute scores. The report is unfortunately foggy on the scoring methodology, but it looks like there’s not much to see here.

Braintrust
"The study certainly suggests that shoppers continue to trust the broader social community for direction and recommendations over any insight and/or information supplied by the seller — brand or retailer. The mistrust and rift between shoppers and most retailers and brands is inherent in the art and science of shopping."

"Looking at another perspective, there are some interesting findings in a Forrester Research report showing that mobile coupon redemption is skyrocketing by 141 percent."

"Retailer social and brand social are not only the most influential, they made the greatest leaps in influence over the last year in the study. But this is a bit misleading of the ~12% using the tools, only about a third say they had any influence whatsoever over 10 different areas."