Why is Burger King offering nightmares to go with its new sandwich? 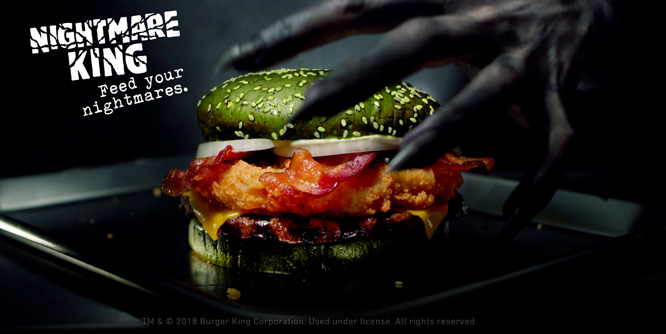 Burger King wants you to know that if you eat its new limited-edition sandwich, you are very likely to have a nightmare when you go to sleep. Yep, the number three burger chain believes that promoting a harmful effect associated with eating its new “Nightmare King” sandwich will make it more likely that you will, in fact, buy it.

The new sandwich comes with a quarter pound hamburger, a crispy chicken fillet, bacon and American cheese on a green, sesame seed bun. To substantiate its nightmare inducing bonafides, Burger King hired the Paramount Trials and Florida Sleep & Neuro Diagnostic Services and Goldforest Inc. to test the sandwich’s effects on 100 participants over 10 nights.

“According to previous studies, four percent of the population experiences nightmares in any given night” said Dr. Jose Gabriel Medina, a specialized somnologist and the study’s lead doctor. “But, after eating the Nightmare King, the data obtained from the study indicated that the incidence of nightmares increased by 3.5 times.”

Dr. Medina believes the combination of proteins and cheese in the Nightmare King led to “an interruption of the subjects’ REM (Rapid Eye Movement) cycles, during which we experience the majority of our dreams.”

So, what type of nightmares did Burger King’s new sandwich cause? One respondent reported aliens attacking a boat he was on. Another said a person’s head transformed into a snake.

DISCUSSION QUESTIONS: What do you think of Burger King’s approach to marketing its Nightmare King sandwich? Will the campaign prove successful or become a nightmare for Burger King?

Please practice The RetailWire Golden Rule when submitting your comments.
Braintrust
"It's the same thrill that makes people go see a scary movie, go on a rollercoaster, or play with the ouija board."

"Just reading the ingredient list of this sandwich is enough to give anyone who watches what they eat a nightmare."

"The scary theme of the sandwich fits right into this time of year with Halloween right around the corner."

11 Comments on "Why is Burger King offering nightmares to go with its new sandwich?"

Sorry, but to me, this is almost as bad as their “Where’s Herb” campaign. How many remember when that bombed? I’m all for creative ideas and yes there will be those few customers who think this is awesome and will buy the sandwich just for the hope of having a nightmare and the experience. However, how many? I don’t think we’ll break any records. Unfortunately, the sandwich itself sounds fine and could have been marketed entirely different for Halloween without the scare tactic of having nightmares. So what could have been marketed successfully may now fail miserably. I can see Burger King getting press with this campaign, but not positive media. They will probably infuriate some customers who think this is not wise and most likely lose some customers who will go to McDonald’s and there goes the whole idea. They should have consulted Herb before rolling this out. Anyone know where Herb is these days?

It’s the same thrill that makes people go see a scary movie, go on a rollercoaster, or play with the ouija board. It’s not something that I would be interested in personally, but there are plenty of people who likely will be. At the end of the day, it’s a bit of fun and I can’t see it doing Burger King any harm!

Just reading the ingredient list of this sandwich is enough to give anyone who watches what they eat a nightmare.

It’s a Halloween gimmick; Burger King is good with gimmicks. People who are into big scares will probably try it. They can wash it down with Burger King’s Frozen Fanta Scary Black Cherry drink, the one that gives you a surprise… well, just Google it.

Define successful. If successful is getting people to talk about that crazy sandwich at Burger King, the campaign is already successful. The scary theme of the sandwich fits right into this time of year with Halloween right around the corner.

If success is getting large number of customers to buy this specific sandwich time will tell. However, I can see this appealing to teenagers, especially teenage boys.

First, I’d love to see how they ever got this through legal. I’m picturing it now. I can envision some rural hamlet in Middle America and a wife or husband defending the late night murder of their spouse with what will become forever known in legal circles as, “The Burger King Defense,” aka, “The Cholesterol Gambit,” or the, “It Must Have Been the Chicken Fillet, Or Maybe It Wass the Green Sesame Seeds,” argument. It will go something like this, “Your honor I loved my husband, wife or domestic partner, but we had dined on Nightmare Kings before retiring and, well, I woke up in a fog, thinking he or she had turned into a vampire. I had driven a stake through his/her heart and cut off her/his head before I was fully awake. My doctor said interruptions of my REM sleep made me temporarily psychotic.” On a serious note for a moment, in what alternative universe does it make sense to advertise that consuming your brand will induce temporary mental malfunction? Even beer companies… Read more »
3
|
0
-   Share

Neither the description of the sandwich nor the fear of a nightmare make me want to try it. So, no thank you!

It’s Halloween, and this is a Halloween-themed sandwich. Burger King is certainly known for taking a contrarian approach to marketing. This isn’t the first time they’ve tried to leverage extreme controversy to fuel publicity and by extension sales. Will it work? I think that comes down more to how many people are ok eating a green sesame bun that, for me, looks like it’s diseased rather than tasty! At the same time, give them credit for being bold and risk-taking! Pink unicorns it is not, but there is surely a customer segment out there that will try it just for the thrill — much like riding a scary rollercoaster.

To break through the clutter, retailers and brands need a unique angle that captures the attention of today’s consumer, and although a nightmare theme burger would not be my first choice it defiantly pops.

If it’s just the burger with no additional media then I believe the campaign will fall short of its potential.

I mean it’s working — we’re talking about it right? It’s a well-timed campaign, given the time of year, and I’m sure there will be people who buy into it to see if it lives up to its claims. If someone tells you that this lotion or potion will make you look younger do you want to buy it and try it yourself? It’s tapping into that same sort of thinking — if you tell people that it’s going to give them nightmares some people are going to want to test that theory (even if the results noted above suggest most people won’t experience anything!) It’s not a campaign to change to the world, but it’s not a complete shot in the dark either.

Marketing is all about cutting through the clutter and creating a buzz to increase brand awareness and excitement. While I am not sure the Nightmare King sandwich will be a big seller, the buzz they are creating will make Burger King more top of mind for consumers which should drive more restaurant visits and sales.

A similar example of a restaurant creating a buzz is when IHOP advertised that they are so serious about burgers that they were changing their name to International House of Burgers (IHOB). While it was a hoax, the campaign was so cleaver that they received a lot of extra free press and word of mouth that increased brand awareness and interest and sales of burgers quadrupled after the IHOB launch.

They just might be able to pry some teenage boys away from their Taco Bell Triple Double CrunchWrap…!

Braintrust
"It's the same thrill that makes people go see a scary movie, go on a rollercoaster, or play with the ouija board."

"Just reading the ingredient list of this sandwich is enough to give anyone who watches what they eat a nightmare."

"The scary theme of the sandwich fits right into this time of year with Halloween right around the corner."