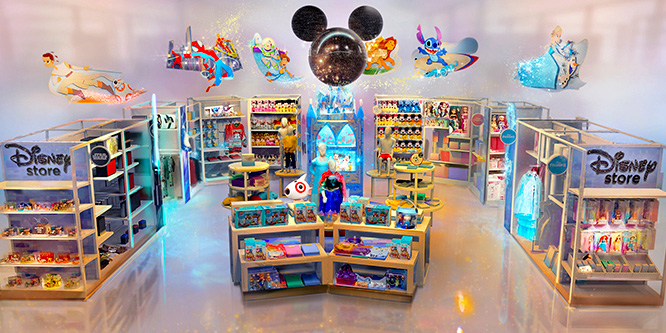 Under the plan, 25 Disney stores will open within select Target stores on Oct. 4, with 40 additional locations opening by October 2020. The offerings include a variety of merchandise from Disney, Pixar, Marvel and Star Wars, including collectibles. Target is timing the October opening for when Disney’s Frozen 2 and Star Wars: The Rise of Skywalker lines hit store shelves.

The in-store shops will feature “music, interactive displays, photo opportunities and a seating area where families can relax and watch Disney movie clips and Park events.”

Target will launch a Disney page on Oct. 4 at Target.com/Disneystore and will likewise position the Disney merch adjacent to Target’s kids apparel and toys on its website. Online offerings will include an expanded assortment and feature user-generated content.

At Walt Disney World, Target will open its small format store at Flamingo Crossings Town Center in 2021, located at the resort’s western entrance. The statement noted that Target and Disney share a strong guest overlap with a focus on families. The opening is expected to “provide ease, convenience and value to guests visiting the Walt Disney World Resort.”

“We believe the combination of Disney’s unmatched entertainment and storytelling with our omni-channel retail platform will create inspiring and unique experiences for our guests,” said Brian Cornell, chairman and CEO, Target, in a statement.

“We know the way consumers shop for those products is changing — so we’re making the magic easier to access than ever before through this collaboration that will bring Disney store magic to Target stores,” added Bob Chapek, chairman, Disney Parks, Experiences and Products.

While in-store boutiques are common at department store chains, the Disney shop in a mass chain is more rare. Macy’s has partnered with Finish Line, Sunglass Hut, Lids, Apple and FAO Schwarz on in-store shops.

DISCUSSION QUESTIONS: Do you see the hook-up between Target and Disney as an equal win for both companies? What are the pros and cons of such in-store partnerships and the challenges Target may need to overcome?

Please practice The RetailWire Golden Rule when submitting your comments.
Braintrust
"With this partnership will Target becomes the happiest retailer on earth? Maybe. "

"Another win for Target. As for Disney, while it sounds like the shop-in-shop will be somewhat experiential, there’s no way it can match the experience of a Disney Store."

"I like the day-to-day accessibility to Disney that Target can provide. It works for at least a decade of Halloween and birthday party shopping for most parents!"

17 Comments on "Will Disney shops entertain guests inside Target’s stores?"

Target’s past collaborations were largely limited to tightly controlled designer programs or proprietary programs. The Disney tie-up marks the next evolution in Target’s brand partnerships: bigger and bolder, long-term deals. The pros outweigh the cons for both companies.

PROS:
Target has arguably been clearing the way for this type of partnership as it ramps up remodels and focuses on in-store experience.
Products will all be merchandised together in dedicated shops rather than interspersed categorically, providing a more cohesive and compelling statement.
Target will be able to draw from a portfolio of Disney properties and tap into its trove of content assets.
Disney’s stream of releases will drive newness in Target stores and Disney’s content platform will robustly support every launch.

CHALLENGES:
The Disney brand is ubiquitous in retail through Disney’s theme parks, branded stores and retail partnerships. Disney and Target must ensure that products and store and digital experience are differentiated.
In-store and online program maintenance (in-store merchandising and online execution) will be critical to success and require close collaboration.

I know shop-in-shops work – Sephora seems to be the only thing working inside J.C. Penney these days – but I still struggle with the whole concept, and I don’t see anything here that stands out. If I want the “Disney experience” I’m going to go to a Disney store. If I want to shop for toys, I don’t want to have to go to 30 different themed areas, which is the natural evolution – if Disney gets a shop-in-shop, then when does Mattel get theirs? This departmentalization is the exact opposite direction of where mass and department stores need to go. Instead, they should be focusing on integrative experiences, the “Target” experience, and owning a position on what the “Target” lifestyle is. I feel like in the end this is more about easy money for Target than it is about delivering something meaningful to the Target shopper.

With this partnership will Target becomes the happiest retailer on earth? Maybe. Disney + Target is a great fit. The Target vibe is fun, its commercials are cool and the tunes are catchy, in-store signage is bright and colorful. It is a happy place.

Disney has high standards; its stores are also upbeat and fun. The only snag I see here is music. Target stores are eerily silent, Disney stores are bouncing with music. Let’s hope the Disney stores within Target continue to play its song catalog. The right music gets people in the mood to shop.

Disney is undeniably the most desired license brand available. It has something for almost everyone. Target is more likely to benefit since the incremental revenues for them from Disney are likely to be more than the other way around. Target will likely see higher than average basket sizes for shoppers but I am unsure whether having Disney will drive traffic. Essentially, the move will help increase in-store purchases for existing shoppers.

Equal win? I’m all in on this partnership. We all need to realize that these two companies have some of the brightest retail minds on staff. Concerned about remerchandising and insuring new looks and products? Not to worry. These people truly understand what retail strategies must constantly be implemented in order to make this successful and surprisingly fresh. And a Target store within the hotel areas? How can that not work!

Another great win for Target! There are arguably few brands on the planet as powerful as Disney + Marvel + Star Wars. Huge demand for legacy product and a predictable stream of new product down the road. This is good for Disney and huge for Target. This is a very healthy reinforcement for the shared brand promise of “focus on families.”

I think this falls right into Target’s strategy. Their remodeled stores include quite a few “shops” of themed merchandise and the Disney store-within-a-store should be the biggest of all. For Disney, it’s a win. They get to partner with an industry powerhouse that has a similar customer base and can execute well. Execution will be key in this experience.

Year round dedicated space to their products. Target is hoping that it makes their locations more of a destination and gains them additional shopping trips and sales. It is true that the space devoted to Disney cannot compete with going to a Disney store, but the selected Target may be in areas where Disney stores are easily accessible. Who benefits the most? I’m not sure. Does it matter as long as both benefit?

Target and Disney are two strong and popular brands. For Disney, they will increase exposure to their products in a highly controlled presentation setting that protects the Disney brand. For Target, they are adding a marquee name that is valued by their core shopper adding another reason to visit the store and affirm the shopper’s connection to the Target banner. I don’t see Target going out and doing this with dozens of other brands, it would dilute Target’s cachet and turn it to an untenable and undesirable real estate play. This is a win-win for the two companies on top of the added convenience and access for the consumer.

Another win for Target. As for Disney, while it sounds like the shop-in-shop will be somewhat experiential, there’s no way it can match the experience of a Disney Store. I recently visited the Disney Store in Times Square and was wowed by the assortment, the magic, and the customer service. Disney won’t be able to give the Target locales the same love and attention. But what they might be losing in experience they’re gaining in footprint. Score 1 for Target. Score 1 for Disney.

This feels to me like Disney is about to jump the shark. Disney stores are destinations; people plan trips there. Putting the merchandise into a Target is not going to create the same sense of excitement — just the opposite. Now that experience becomes ordinary. Worst case, parents avoid the section — or Target — to prevent the unplanned battle with the kids.

I’ll go out on a limb and predict that this won’t last for long.

While I see Jeff’s perspective on Disney possibly jumping the shark on this collaboration, there are many cities that are not big enough to have a Disney store nearby, where this could work in a Target store. As noted by many posts, the execution will measure the success of whether this is value added to bring customers (with kids) into a Target store.

I agree it will rely on execution. The challenge will be for Target to maintain Disney standards in these sections – even at 8 p.m. on Saturday.

I wonder who will staff the Disney area? It would make sense for actual Disney associates. I haven’t seen anything on that, have you?

I like the day-to-day accessibility to Disney that Target can provide. It works for at least a decade of Halloween and birthday party shopping for most parents!

Feels like back to the future for me. Back when Anne Osberg ran Disney Consumer Products and Target was all in on theatrical releases bringing frequent fresh energy to the store. Warner Bros were also a big player. Target backed off that strategy and the stores suffered. Disney becomes an ingredient brand and adds value to their core — moms.

This looks like a win-win for both companies. To have a dedicated Disney section in Target gives the mom shopping with her kids a destination of fun and excitement while she can also pick up groceries. What will be interesting to see is how this partnership will be used on Disney’s new streaming service coming out later this year. Will viewers be seeing Target ads? Or will Target be the sponsors of certain shows to continue to reinforce the partnership in the consumers minds?

Braintrust
"With this partnership will Target becomes the happiest retailer on earth? Maybe. "

"Another win for Target. As for Disney, while it sounds like the shop-in-shop will be somewhat experiential, there’s no way it can match the experience of a Disney Store."

"I like the day-to-day accessibility to Disney that Target can provide. It works for at least a decade of Halloween and birthday party shopping for most parents!"