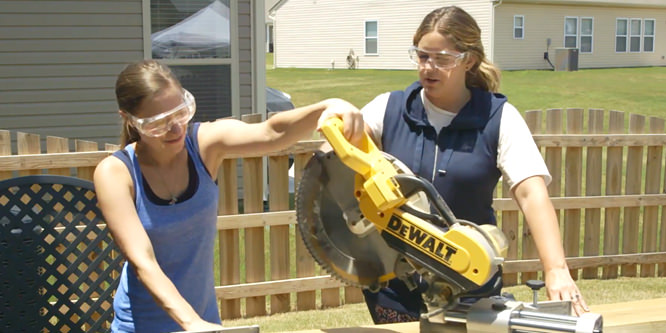 Some home improvement projects aren’t as easy as the pros make them look on TV or in YouTube videos. For some of those aspiring DIYers whose skills don’t quite match their ambition, Lowe’s is now offering a helping hand.

The Lowe’s UpSkill Project website allows people with a home improvement project but limited skills to submit a video about the task they plan to take on. Lowe’s then selects winners and sends out a team of associates and experts to their home — not to do the work, but to guide the homeowners through planning and completing the project while teaching home improvement skills in the process. The first round of the UpSkill Project featured 200 winners from 40 U.S. cities, according to a press release.

Providing on-site teaching services on-demand and at scale could be challenging for the chain, but the UpSkill Project does not appear to be a one-off promotion. While submissions are now closed, the UpSkill Project website lists three upcoming application windows for people in specific cities to submit videos to participate in future rounds. The website lists the contest as being open in two cities in August, three cities in September and two cities in October.

Offering a personal touch is a big part of what differentiates home improvement chains in the minds of customers. Ace Hardware generally tops the list of favorite stores for home improvement shoppers specifically because the in-store staff are knowledgeable and helpful. But there is only so much guidance an associate can give in-store. Bringing people on-site to guide customers, rather than do the work, could represent an unexplored type of home service/learning experience hybrid.

And while teaching home improvement skills may seem like a tall order, some big names have made an educational element to the retail experience.

Apple stores have long offered in-store workshops to train customers on how to get the most out of their products. In fact, as part of an initiative called “Today at Apple,” the retailer recently expanded the classes to all 495 of its stores.

Please practice The RetailWire Golden Rule when submitting your comments.
Braintrust
"Maybe this is precursor to a more regular service offering, but I rather like the 'win it' versus 'buy it' model."

"This is a cool move on the part of Lowe's and I do see a service coming out of it. "

"Combine the personalization and training services with the digital and social platforms and you have a winner."

I see this as a great promotion but not sustainable on a regular basis due to cost and needed workforce. However, I do see Lowe’s and other home centers giving classes at the store level for various skills, similar to Apple. DIYers have different levels of experience, from neophytes to advanced, and offering opportunities for them to expand their knowledge is smart and will help sell more product.

The UpSkill Project is exactly what younger homeowners need. Most were not taught any DIY skills be DIFM Boomer parents, so Lowe’s can fill the gap. The video submission keeps it fun and interactive for consumers. Maybe this is precursor to a more regular service offering, but I rather like the “win it” versus “buy it” model.

As an HGTV junkie, I love this. I would even take it a step further and turn it into a TV show. Look at the success of shows like Flip or Flop, Fixer Upper and the old show Curb Appeal which has some similarities to this. One random house on the block is picked for an update. Then add a little Food Network where the chefs teach you how to make certain dishes.

This is a cool move on the part of Lowe’s and I do see a service coming out of it. For my 2 cents.

It’s a nice gimmick, because it draws attention to Lowe’s, but it’s hard to scale due to cost and the number of requests for help. Lowe’s and Home Depot have done a great job of making home improvements easier than they actually are. If they can help explain how to successfully complete these projects, they will drive more people into their stores.

This is an outstanding strategic move by Lowe’s and should become a regular home service offering, as it will prove to be a key differentiator to help stimulate the growth of the DIY trend. DIY has increasingly become a trend that is here to stay and Lowe’s and other home improvement/home decor companies would be very wise to capitalize on this opportunity.

Services, such as training, support and personalization that can be better achieved via in-home visits will help remove the intimidation factor when it comes to home improvements. Training and education will also lead to further in-store sales and revenue opportunities, as Lowe’s consumer base will be further empowered.

Combine the personalization and training services with the digital and social platforms and you have a winner.

This is great for drawing attention to the expertise Lowe’s has to offer but there is a limit as to the number of people who can be helped. Doing this project in conjunction with promoting in-store skills training would be a good approach. Reviewing the videos should provide some insight as to what kind of training is most in demand.

This is a great idea for Lowe’s. It will send a message to Lowe’s customers that the stores are interested in helping customers on projects where the customer does not have the requisite skills. One can imaging Lowe’s commercials based on these video saying “Lowe’s help me do this!” Helping customers with home projects is a way for home improvement retailers to distinguish themselves from Amazon and their competitors.

I love this idea! It’s not scalable because the project is too time- and resource-intensive, but holding a contest like this every so often is a great way to build trust and loyalty with customers. You’re giving people the tools they need to do projects themselves so they’ll keep coming back to buy more tools. Lowe’s could make it sustainable by charging for the service which would still be considerably less than if a customer hired a professional to do the whole project. The more you build relationships, the more you build the bottom line.

Why not? Younger homeowners often need instruction and — if they can’t do it themselves — they will have to contract it out. So, if you are in the home improvement business ideas like UpSkill seem to make sense. Remember, they aren’t offering it to everyone and — over time — they will build up a video library of the most common projects which shoppers can access.

As to the second question, if it is a good idea for Lowe’s why wouldn’t it be a good idea for other DIY retailers? Even Home Depot which caters to contractors still does a healthy business with regular shoppers.

Example of fun public relations activity. It would be nice to have a projects desk in the store to walk a person through a project, and not just a materials blueprint as they do with kitchens, decks, etc. – get to tips, and process. Lowe’s has some of this type of stuff online, but it is nice on new project types to be given process, and project tips. Of course, that is why YouTube is such a valuable resource to DIYers.

While teaching or at least helping improve the skillsets of customers seems like a natural course for DIY stores, this approach sounds remarkably inefficient (not to mention that few people would want to wait the time required to go thru some kind of competition, before they could even start). Back to the ole drawing board … in every sense.

This is a great concept with a hidden opportunity. In addition to helping guide and instruct customers on a specific project, those experts could also serve as an in-home consultant. From recent experience as a homeowner, one project begets another. While those experts are in the home, they could look for opportunities to help with additional projects … and potentially sell more product.

Although not scalable in large numbers, this is a great idea by Lowe’s with plenty of “adjacent” potential to expand their DIYer market with social media promotion and other online marketing to spread the word. The added benefit of competing for a “win” also helps with the potential for success. I can also see some interesting product sponsorship Lowe’s could pursue with manufacturers and for any of their own in-store products. Again, the added layers of promotion this brings with video and stories on the web can only help them grow their audience in a similar way to how Apple does it with their stores. Great move by Lowe’s!

Interesting. From a marketing perspective it should draw some focus. Is this Lowe’s future version of Geek Squad?

Braintrust
"Maybe this is precursor to a more regular service offering, but I rather like the 'win it' versus 'buy it' model."

"This is a cool move on the part of Lowe's and I do see a service coming out of it. "

"Combine the personalization and training services with the digital and social platforms and you have a winner."