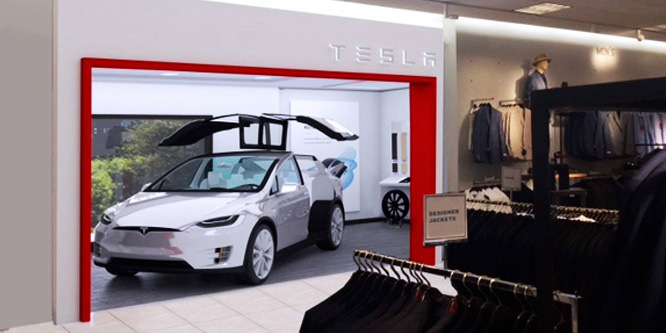 Nordstrom has partnered with Tesla, manufacturer of electric cars, and has opened a Tesla boutique store in a Los Angeles Nordstrom location, according to USA Today. The store-within-a-store is in the men’s department and is slated to remain for the rest of the year.

Nordstrom’s other experiments with in-store pop-ups have seemed more conducive to the store’s settings. The retailer’s “Pop-In@Nordstrom” initiative has introduced a revolving lineup of stores-within-stores featuring designer fashions, skin care brands and other items geared towards a luxury shopper.

Though it may initially look mismatched, Nordstrom may be showing foresight in piloting a pop-up for a manufacturer with Tesla’s tech bent. Technology is, after all, becoming more fashionable through the advent of wearable devices, the promise of “smart clothes” on the horizon and the increasing prominence of high-tech, high-priced IoT home appliances. One need look no further than Apple’s attempt to rebrand itself as a luxury retailer with newly-designed Apple Stores and high-priced Apple Watches to see the further blurring of the lines between high-end tech and high-end fashion.

But whether the shopper seeking high-priced luxury fashions at Nordstrom will go in for a big ticket purchase like a vehicle, or whether people in the market for a pricey electric car will shop their way through a luxury department store to get there, remains to be seen.

In a statement quoted by USA Today, Tesla appeared confident that the two types of luxury shoppers — tech and fashion — had interests that would dovetail.

“The Nordstrom shopper embodies a lifestyle that parallels that of many Tesla owners –- people who are forward-thinking, savvy, and curious to explore the latest and best trends,” the statement read.

DISCUSSION QUESTIONS: Will the Tesla store inside Nordstrom be a success and lead to other such stores-within-a-store from the chain? Does it make sense for luxury apparel and fashion retailers to deal in high-price tech like electric cars or IoT home appliances?

Please practice The RetailWire Golden Rule when submitting your comments.
Braintrust
"Nordstrom might have a great history with technology, but cars are an entirely different matter."

"Though it is unlikely a Nordstrom shopper will purchase in-store, the customer demographics are nicely aligned."

"Before I visited the Tesla store in one of our malls here in Atlanta, I might have thought otherwise but … this just might work!"

15 Comments on "Will luxury shoppers buy electric cars at Nordstrom?"

For lessons on the Nordstrom experiment, I suggest reading a Fast Company story from May 2011 titled: “Why Best Buy Is Pulling The Plug On (Most) Electric Scooters And Motorcycles.” Subtitled, “No one is buying them because of charging confusion. Is there a future for electric two-wheelers sold as personal electronics?”

Best Buy’s now defunct venture capital arm actually invested in the startup brand for these goods as a way to both test in-store sales and the possible financial gain, and to imagine a day when its automotive audio and gear sales department could sell electric cars in the big parking lots. But the experiment was not to be. Maybe the time could be right in the next few years as Nordstrom starts winning, and a retailer also looking for growth, like Best Buy, gets on board.

This is a pop-up store that is mismatched. Purchasing a car is a major decision which requires specialty assistance, follow-up, test-drives and guiding and coaching throughout the purchase. Nordstrom might have a great history with technology, but cars are an entirely different matter. Nordstrom doesn’t have the support staff to invigorate this pop-up store, nor the resources it requires.

What makes sense is for physical retail to become more “lifestyle” oriented. That is, cater to all aspects of their customer’s life. Urban Outfitters is a master at that, Restoration Hardware too. Abercrombie used to be (remember that magalog!) good at it, and department stores also used to be, until they started relying mostly on apparel these past two decades.

It’s a great way to create more interest in your stores for sure, but becoming a lifestyle merchant does not happen over night. The idea of taking category merchants and teaching them to focus on their customer’s life is quite a challenge. But it is very difficult to see a future for most physical stores unless they get out of their lanes and take that step.

So good job Nortstrom, keep it up.

Before I visited the Tesla store in one of our malls here in Atlanta, I might have thought otherwise but … this just might work! Nordstrom is known for their great men’s department so putting Tesla in there could be a game-changer.

While I’m not on board calling a car “tech,” the Tesla electric cars are so much of an anomaly that they have quite a draw. Everyone is curious and, based on the traffic I saw at the Lenox Mall Tesla store, they love to sit in them, talk about them even buy the souvenir shirts.

Kudos and my 2 cents to Nordstrom.

I don’t believe many Nordstrom shoppers will buy a car there, this isn’t a volume play. However, this alliance showcase is a great use of advertising/PR money. Both brands will benefit from this move: the Nordstrom buyers will have exposure to a car they are likely to consider; the Tesla owners are validated in their choice of a high-end electric car.

If Nordstrom were selling the typical high-end sports car, then I would question if that is the best use of their precious floor space. However, Tesla is not the typical high-end car. It is still considered something special — almost an anomaly. That separates it from other cars, but the big question still remains: Will a customer buy a car at Nordstrom? (Maybe a Tesla?)

The store-within-a-store concept is but one solution to the current plight of physical retailers. It is also a sign of growing desperation on the parts of retailers. Brands such as Tesla or Samsung are enjoying better service and visibility in stores such as Nordstrom or Best Buy, while these stores profit from the business of a strong brand.

Tesla probably does not expect to sell many cars at Nordstrom, but to win valuable exposure to luxury shoppers. Not a bad idea for Nordstrom, in its current situation, to go along with that.

This is a great PR win for both brands. Assuming this expands to more Nordstrom locations, Tesla is able to expand its footprint of showrooms at a relatively low cost, with many coming to new geographic markets where Tesla has no presence. Though it is unlikely a Nordstrom shopper will purchase in-store, the customer demographics are nicely aligned. It creates Tesla brand exposure and may drive more traffic to Nordstrom simply out of curiosity.

If you’ve ever been in a Tesla retail store you see the value in this partnership, especially for Tesla and especially at The Grove. This is a smart strategy for Nordstrom too. Nordstrom has struggled to regain its relevancy and it has become like so many other retailers (i.e., on sale, promotional and lacking a distinct merchandise strategy) so having a Tesla shop within the store makes a visit to Nordstrom more interesting and exposes people who might not otherwise visit a Tesla store to the vehicles.

My wife, who is absolutely not a car person, was actually fawning over Tesla when we visited their store at Westchester Mall. They do retail very well, among other things. This is good for them and for JWN.

I think this is a good match. Tesla stores are already in some malls, and why not be where the affluent and probably eco-conscience consumer is? I imagine they will be staffed with typical Tesla sales people and will probably have the test-drive cars in the parking lot ready to go. I predict this will be a winner!

This is an innovative, playful way to engage customers and increase brand awareness for both Telsa and Nordstrom. If the pilot program works, this will help improve Telsa’s retail footprint and it may also help engage Nordstrom’s customers and entice them to come into the store. This unlikely pairing could end up being a good match.

This is a unique way to create a fun, engaging and surprising “happy speed bump” for their stores, but the KPI should be customer experience and NPS — not sales. The copycat ideas that may show up in the industry inspired by this could get scary, but why not try? At least they are shaking things up a bit.

Again, as always, define “success.” It’s likely both brands cater to the same kind of shopper — i.e. higher-income — and I don’t have much trouble seeing what Tesla might get out of it. Start out to buy a suit or pants or whatever, see the car, and become intrigued. But the reverse — set out to look at a car and end up buying clothing — doesn’t seem to have the same logical flow (not to mention the considerable floor space even one car will eat up). I agree “remains to be seen” is the best prediction.

There is a certain strategic customer alignment here. But the story is quite concerning for Nordstroms. They are coming off of having been far too distracted by the digital distractions believing it would create strength — and it didn’t.

So my question is: why didn’t they learn the lesson and avoid what looks like another Hail Mary bet on technology?

Consumers want strong stores — smartly merchandised, well run, with innovative and interesting products as well as a strong selection of staples. Instead, Nordstrom gives them a showcased electric car?

Since Tesla already forgoes traditional dealerships in favor of showrooms in malls, this store-within-a-store concept is simply taking it one step further. I like the idea as it is a means of further targeting their ideal customer.

A mall-based Tesla showroom attracts a lot of attention and visitors, but is a Build-A-Bear Workshop or Foot Locker customer that strolls into Tesla really their target consumer? Possibly. However, a Nordstrom customer probably fits Tesla’s target a little better — they likely have disposable income, are style conscious and are attracted to Nordstrom’s unique brand of customer service. Time will tell if this strategy is successful for the retailer and the automaker, but it seems like a worthwhile experiment for Elon Musk since it is simply an extension of Tesla’s current brick-and-mortar strategy.

Braintrust
"Nordstrom might have a great history with technology, but cars are an entirely different matter."

"Though it is unlikely a Nordstrom shopper will purchase in-store, the customer demographics are nicely aligned."

"Before I visited the Tesla store in one of our malls here in Atlanta, I might have thought otherwise but … this just might work!"