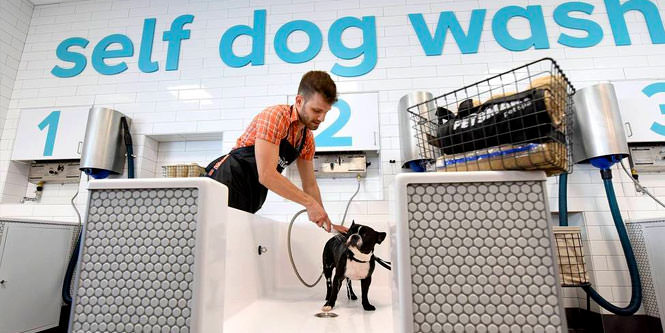 People like to pamper their pets, sometimes without regard for the expense. That’s a phenomenon PetSmart aims to capitalize on with its new store concept, which turns a trip to the pet store into a luxurious spa getaway for four-legged friends.

In December, PetSmart opened a new 6,000 square-foot PetSmart Pet Spa in Franklin Township, New Jersey, according to a press release. The store, about a quarter the size of an average big box mainline PetSmart, features a sleek concierge desk for setting up appointments, a natural pet food store, a coffee bar and a self-service dog wash station to promote owner/pet bonding. The store’s modern décor also includes a chandelier made of tennis balls.

The retailer opened its first PetSmart Pet Spa in August of 2016 in Oceanside, New York which, according to a press release at the time, features decadent doggie indulgences such as baked dog treats behind a glass bakery case and grooming services provided in a high-end salon area from certified groomers.

Throughout the retail landscape experiential store concepts have proliferated in recent years as retailers look for ways to bring consumers into stores with something beyond the products that they can find online. But whether pet owners will go in for boutique luxury services enough to sustain an entire store concept remains to be seen.

PetSmart has not released word about expanding Pet Spa into more markets nationwide. The mainline chain currently has around 1,477 stores throughout the U.S., Canada and Puerto Rico.

PetSmart has taken numerous other steps recently to keep its offerings on par with retailers that serve the human side of the animal kingdom.

For instance, in November of 2016, the store announced the rollout of same-day delivery for 17 major metropolitan markets with a $7.99 surcharge. And back in 2009 the chain was mulling services such as dog walking, backyard clean-up and aquarium setup, which would bring PetSmart professionals into customers’ homes. Currently, though, the PetSmart website lists only on-site services, such as grooming and training, as being available.

DISCUSSION QUESTIONS: Do you think the PetSmart Pet Spa concept will catch on with the chain’s customers? How far can the pet pampering trend go? What will it take for the concept to be a success in other locations throughout the country?

Please practice The RetailWire Golden Rule when submitting your comments.
Braintrust
"Pets are all about the experience, and so pet product stores can offer great examples of adding services to the value proposition for customers."

"I don’t see this concept as sustainable. It should be more about the pet and less about the human IMHO."

"Am I the only one who thinks PetSmart (and “co”) are schizophrenic?"

11 Comments on "Will PetSmart’s luxurious Pet Spa concept catch on?"

I figure it will catch on in the major “waste your money” cities. I do not think it will stick in some areas — where dogs are still dogs. Get real dog owners — it is a dog! Not a starving family that could use your help vs. your dog that is just happy with a Milk Bone. Millennials try to treat their dogs like more than they are — and does the dog get it? No. But the Millennials feel that they look cooler doing this. PetSmart — it’s almost time to snap back to reality and just offer the basics for dogs — that would sell in every city. Call it Basic Dog Hangout. Dogs like hangouts rather than a spa … my dogs are too cool to go to a spa.

Adding services to retail offerings adds to the reason for loyalty (while contributing to margins). Pets are all about the experience, and so pet product stores can offer great examples of adding services to the value proposition for customers. I’ve often wondered why stores offering evening or prom wear don’t host information sessions on how to make the most of the “all dressed up and stepping out” experience. Fitness apparel stores can generate visits and loyalty with short presentations on addressing the challenges to improving fitness.

This is a great example of experiential retailing. Dog food delivered by Amazon was a great reason to stay home. But PetSmart made it painless and affordable to bring my dog down for his bath. The nominal fee is not really enough to make any money on, but the availability and affordability of the whole experience makes a shopper out of me, especially in the winter when the back yard is not exactly shampoo friendly, and cleaning the tub after a dog bath is a daunting project. It would be great to see how many baths result in other incremental purchases.

If you really want it to be all about the pet then give them a leaf-filled room with all kinds of smelly things for them to poke their noses into. The spa feel is lost on them. But this appears to be more about the humans. I take my dog to PetSmart already for his grooming and it would not make one bit of difference to me if the place looked and felt more luxurious. Now if the prices went up along with it then I’d be looking for other digs (pun intended). As for the self-washing stand. There used to be a pet store around here that did that every Saturday. They had tubs set up outside and it was a free-for-all. Lots of fun and yes, I am sure they saw a lift in sales every Saturday. Will the pet spa catch on? Not so sure about that especially if the prices will be higher than what they currently offer. Could they do the same thing by simply dressing up their current grooming… Read more »
3
|
0
-   Share

Lee, I think we’re kin when it comes to our dogs! I always appreciate your comments.

Offering some of these services in a PetSmart superstore might work but I don’t see this being a viable standalone concept for any significant number of locations. As Tom indicated, the concept’s best chance of success in is the major metros where there is the highest concentration of potential pet owners who might be willing to indulge themselves and their animals at a pet spa.

As usual, we’ll stretch something to the breaking point and then we destroy what we had in the first place. But yes, people will pay. Around here just the “normal” cost of basic grooming (fundamentally a bath and blow-dry) is hitting $150. Or about a year and a half of haircuts for me! What’s the new luxury version going to cost — $200? $250? It takes me about 15 minutes to bathe my dog and trim her nails. She has zero interest in the process and cooperates only for the treat at the end. But my point is that’s equivalent to $600 an hour even at the low rate. No doubt about it … I’m in the wrong business! I love my dog and frankly think dogs are how you know there’s a God. And, as I preach to myself, wouldn’t it be great if we could manage to give our pets all the love we’ve got, and send the two-hundred bucks to a mom trying to find food for her kid? If the treat… Read more »
4
|
0
-   Share

Ian, your comments resonate with me. I love my dog. But the cost of sending her to a spa is better spent on a family needing food for their children. You are on target my friend.

Am I the only one who thinks PetSmart (and “co”) are schizophrenic? On one hand, selling small animals, birds, reptiles, fish, etc., to whoever has the cash (regardless of their ability to care for them). Promoting spa services, grooming and even adoption events for cats and dogs on the other. Perhaps a name change to DogandcatSmart might make sense. Doesn’t roll off the tongue but in the meantime, I’ll continue to buy from Amazon.

I love my dog and enjoy having her around. In fact, she is laying on the floor next to my chair as I type this. She is small. She is pampered with love and care. She is not going to a spa. Yes, she gets groomed regularly. But the cost of sending a dog to a spa is only satisfying the pampered owner. That money is better spent donating to someone having trouble feeding their family.

Even here in the Bay Area — epicenter for all that is new and ridiculous — this has attracted criticism, which means 1) it’s the latest fad, so we’ll see more of it , but 2) it will collapse once the first downturn hits.

The only question is will the downturn hit before the idea becomes widespread or after?

Braintrust
"Pets are all about the experience, and so pet product stores can offer great examples of adding services to the value proposition for customers."

"I don’t see this concept as sustainable. It should be more about the pet and less about the human IMHO."

"Am I the only one who thinks PetSmart (and “co”) are schizophrenic?"