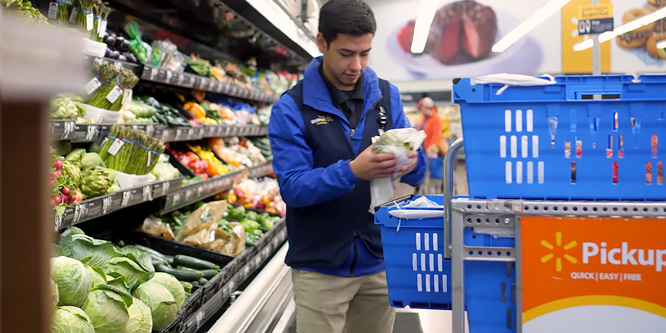 With collection, rather than delivery, the most popular means of receiving online orders, cross-channel retailing is emerging as the dominant model in U.S. online grocery.

That’s one of the primary findings of CoreSight Research’s study, “US Online Grocery Consumer Survey: Amazon Is the Most-Shopped Retailer, but Not Yet a Full-Order Grocery Destination.”

In a survey of 1,885 Americans from March, some 51 percent of respondents said that they mostly opt to collect their online grocery orders, while 45 percent mostly opt to have their orders delivered. (The remainder could not remember which service they used most).

Amazon, which focuses on delivery, pushes up the average delivery rate, and the e-commerce leader was by far the most-shopped retailer for online groceries. Some 59 percent of online grocery shoppers surveyed said they had bought from Amazon in the past year, versus 26 percent for second-place Walmart.

However, a number of data points suggested that shoppers tend not to use Amazon for conventional, full-basket grocery shops, while they do tend to visit Walmart.com for such shops — implying that grocery orders at Walmart.com are bigger than at Amazon.com.

Some 60 percent of those surveyed who had bought groceries online from Walmart in the past 12 months mainly collected their orders. Walmart online grocery shoppers were also found to be significantly more likely than the average to have bought fresh and frozen food categories online versus Amazon.

CoreSight Research said the findings support its long-standing view is that it is much more difficult to make pure-play internet retailing work in the grocery category than in non-food categories. Amazon’s moves to acquire Whole Foods, launch Amazon Go and merge Prime Now and AmazonFresh indicate that it understands pure-play’s shortcomings.

CoreSight Research concluded, “The popularity of grocery pickup services and the extension of same-day delivery by retailers such as Target seem to foretell a polarization in online grocery: we expect to see lower-cost, collection-based services fulfilling the majority of large, family-type orders and premium services such as Amazon Prime Now and Shipt fulfilling smaller orders via same-day delivery.”

DISCUSSION QUESTIONS: Do you see collection points driving e-grocery’s growth in the future? How will shoppers’ grocery trip frequency, both online and to physical stores, change as a result?

Please practice The RetailWire Golden Rule when submitting your comments.
Braintrust
"In high-density, large and affluent urban metros, delivery will still play a key role, but pickup will broaden access."

"The issue with online grocery is that it has always hit the perishable wall as an obstacle to scaling. That's where pickup will play the biggest role."

"The good news is that the retailer is also potentially better off as there is less pressure to keep infinitely scaling the distribution fleet network."

Online grocery pickup is economically viable in more markets than full service delivery is. And store-based retailers favor it over delivery for obvious reasons.

That’s why Walmart, Kroger, and dozens of Instacart partners continue to expand the availability of online order pickup. And availability is a precursor for trial and adoption.

In high-density, large and affluent urban metros, delivery will still play a key role, but pickup will broaden access.

Regardless of whether the model is pickup or delivery, online erodes grocery margins. Retailers need to offer such services to compete, but they are rarely great drivers of profit.

I see collection points increasingly being installed outside existing physical stores, so customers can go to familiar locations and not have to enter the building to collect their groceries. I also see the average transaction item count decreasing as more and more shoppers want fresher foods on almost a daily basis.

Even after 20+ years of trying, online grocery is still a nascent business when compared to overall e-commerce. Retailers are still trying to crack the code. As consumers become more comfortable with delivery and pickup these options will increase popularity and it will be easier to discern how these options will impact traditional grocery shopping, store size and location. Until then, it’s too soon to make definitive statements.

This makes a lot of sense as all the research we’ve done shows BOPIS as a huge driver of sales for any category, but grocery would be the ultimate fit as most people do not like the rote “chore” of food hunting. You’ve got to give it to Walmart (again) who has already tested pickup stations and is rolling them out. For most grocers, it looks like they got out-innovated by the team from Arkansas one more time.

As long as online ordering for groceries includes fresh and frozen items, collection points will help e-grocery grow. However, the burden is on the grocer to please their customers with fresh produce that meets expectations or else they will shop for themselves or someplace else. Most shoppers will have one full-shop order online for pickup and then stop at store for fill-in or forgotten items. Impulse buys may suffer but good webpage design can help with that and vendors, for a fee, can add to the web pages too. This helps working families but for seniors, shopping at the store will continue as it is a social event as well as a shopping event.

It will be a combination of the two that will win. Amazon is getting the sales for bulky items such as paper towels, laundry detergent, canned goods and boxed good that are non-perishable. Personal care items, pet care and candy items are also big selling categories.

The issue with online grocery is that it has always hit the perishable wall as an obstacle to scaling. That is where pickup will play the biggest role. Consumers will use delivery for much of the non-perishable stockup items and pick up for perishables.

Yes, collection points will become more critical going forward. The final mile has been an issue since online shopping became a reality. The timing, expense, security, etc. still remain issues. However the click and collect model holds some real opportunities for food retailers. The key is to persuade shoppers to come into the store when they come to pick up their order. Collection points in-store, adjacent to produce, bakery, deli, etc., provide the customer with the option to enhance the visit beyond merely picking up non-perishable COS products. Even if the retailer provides a separate outside pickup, it should provide special parking for these shoppers to quickly and easily visit the store. Research indicates that click and collect shoppers spend more than pure online or pure store shoppers only. My thinking is that when they enter the store they have an empty basket or cart, which gives them permission to treat themselves and their families with delicious, normally perimeter offerings. Shoppers tend to view the amount of products in their carts as a heuristic of… Read more »
1
|
0
-   Share

This makes sense as a way to suit people’s ever increasingly busy schedules. BOPIS gives more flexibility. If you want to pick up an hour later you can do that, whereas a home delivery means you are shackled to your home for the designated time slot. You are also not competing for the best delivery slots; the consumer will be a winner with this approach. The good news is that the retailer is also potentially better off as there is less pressure to keep infinitely scaling the distribution fleet network.

It is a mixed bag for consumers’ preference for receiving online grocery orders and retailers need to provide options. The preference for each person may also differ based on the type of grocery items they order. For example, non-perishables are more likely to be ordered for home delivery, where they may be sitting at the doorstep for potentially hours. However, for perishables such as meats and refrigerated or frozen items, consumers will often prefer to pick them up in the store or at a collection point where they are held at the proper temperature.

The reality is that different customer personas will shop differently but almost everyone is time starved so providing options to serve the customer wherever, whenever and however they want to shop is critical.

Choices and options are the key to success.

Store pickup is likely the winning approach for suburban supermarkets, especially, but it adds operational complexity to stores in an industry that can barely master on-shelf availability. Maybe this is a good thing. The pressure to fulfill online orders at the store level without substituted or missing items may force supermarkets to finally adopt store-level perpetual inventory and automated ordering practices.

A word of caution to any retailer contemplating either a third-party picking and delivery partner, or a turnkey solution for click-and-collect: Get your stores right first, lest you introduce a shopping experience that could diminish your reputation and undermine trust.

Braintrust
"In high-density, large and affluent urban metros, delivery will still play a key role, but pickup will broaden access."

"The issue with online grocery is that it has always hit the perishable wall as an obstacle to scaling. That's where pickup will play the biggest role."

"The good news is that the retailer is also potentially better off as there is less pressure to keep infinitely scaling the distribution fleet network."