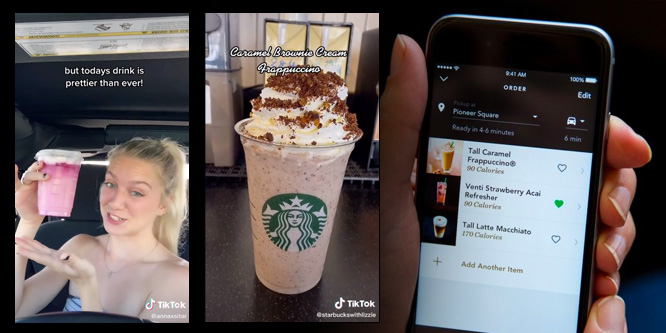 Many retailers are hungry for social media notoriety and the traffic it brings but, for Starbucks and its employees, becoming the object of a TikTok trend is turning into a giant headache.

TikTok users have been flooding Starbucks’ mobile app with orders for “appucinos” — complicated, multi-ingredient drinks the customers proudly showcase on TikTok — sometimes to the frustration of baristas, Buzzfeed News reports.

Starbucks’ app makes customized orders easy. That combined with the clout that sharers receive on TikTok has inspired the creation of, in at least one high-profile instance, drinks containing up to 13 ingredients. Some of the custom drinks have grown so popular that they have begun to account for a significant number of the drinks purchased in a given location. The phenomenon has irritated baristas, especially when customers order the drinks during rushes or request them at the counter using unofficial names.

Not all baristas, however, view “appucinos” with contempt. Some have even begun TikToking their own custom creations.

Starbucks’ TikTok trendiness is not the first brush the coffee giant has had with an online viral phenomenon.

In the early 2010s, increased use of social media led to the popularization of “secret menus” or “menu hacks”. Online sources listed off-menu items that customers could purportedly order at major chains.

Websites like hackthemenu.com, which still exists, feature items that are unacknowledged by restaurant chains. Sites like these also offer ingredients so workers can create these hacks, if permitted to do so.

Some restaurants like Panera and In-N-Out Burger went legit with the concept, creating a line of off-menu items that in-the-know customers could discover online or through word-of-mouth, NPR reported in 2013.

Recently, some retailers have found TikTok’s reach to be a lifesaver. Early in the novel coronavirus pandemic, for example, mom-and-pop candy retailer Candy Me Up was able to keep its doors open through a quick pivot to e-commerce based around promotions tied to a then viral candy-related TikTok challenge.

DISCUSSION QUESTIONS: Should Starbucks and other retailers place limits on social trend-driven purchases like “appucinos” or should they encourage them? How can retailers benefit from these social trends while avoiding business disruptions?

"It is a nice problem to have. If baristas are annoyed, or if it queues up the drive-thru, it is for the management to solve and staff up to meet the demand."

One question: Frustrating or not, are these creations profitable? It’s one thing if the customizations end up costing more than the price of the drink, it’s another thing entirely if everybody is still getting paid. I’ve seen some of these “drinks” cost $80-$100 by the time all is said and done. A little bit of training on how to handle a customer who could be annoying to the barista (and also other customers in line), and I would think companies should be able to make everyone at least capable of managing the situation. And at $100 each, I gotta think this is a fad, not a trend…

You’ve got the right approach. Charge full price for all the add-ons, and this fad will disappear.

A cultural phenomenon that is a sad statement about our culture.

No way should they put limits on these. I think they should embrace it and ride it as far as they can. Like anything, it will have its peak and then fade away. What 40+ year old brand can drive that kind of engagement? Most brands would pay millions to an ad or marketing firm to generate that type of publicity.

I think retailers have to figure out how to manage the disruptions – either through adding staff, offering bonus/incentives or helping streamline more mundane orders through process, equipment, etc. However I doubt many other brands will have to think about this kind of frenzy. Most have plain and simple menus, those like Chipotle have fewer ingredients so there’s a limit to the madness. They will only wish they had this kind of frenzy to “worry” about.

This was going on before TikTok – TikTok just gets the drink out there faster for people to see. I think management needs to be proactive for this, and teach and coach their associates on how to keep up with the demand. I was really surprised when I went to a Starbucks and asked for a puppuccino for my dogs who just had their shots. I thought that was already a thing at Starbucks…

This is amazing for Starbucks – if they can manage the frontline effectively using effective frontline communication, support and maybe incorporate incentives for the baristas – this type of social media placement is gold! Frontline apps like Axonify or Relex are some of the qualified tech solutions.

If a competitor knows something about a company that’s not published, it probably means something bad. But if a customer has taken interest in learning something and is intrigued enough to walk into your store to try it, the retailer should be delighted and grateful; and try everything to make sure the customer leaves happy. Perhaps they should direct such customers to a “master barista” (if there is such a thing), who is better trained and more patient to handle such requests.

I love the concept of “master barista” — Starbucks could run with this idea with community nominations driven through social sharing and work it up to a global reality TV type event like a Top Chef series. (Nominate your favorite barista and earn stars…) With high-scoring performances and beverages finding their way into seasonal promotional circulation, of course.

This is no more than the TikTok activity for the month. What is next, who knows? But this will disappear as quickly as it started.

What a truly sinister trend. If it were based on anything remotely positive, it would be quite forgivable for Starbucks to work with it. However, these “orders” are founded solely on the nasty notion of one group subtly/overtly trying to over-task another. Truly, it’s just about “them” seeing how far they can go. Then, when bored with this, they will be off to another class-conscious conflict. Meanwhile, Starbucks, like all customer-facing/servicing business, “understandably” thinks first (and mostly) about adding transactions over whether the increased work grossly impacts workers’ conditions. So, they expect their baristas to deal with it. Period. If Starbucks were truly wise, and had time on their side, they could work with this as others have noted. By: 1) limiting basic, no-added-cost configuration ingredients while adding premium ones for additional costs; 2) train some to be “master” baristas, like craft cocktail bartenders; and 3) ultimately create an entire elevated class of complicated and more costly concoctions. Which would undoubtedly limit their being ordered. (It should also be noted, that if any special orders… Read more »
2
|
0
-   Share

"It is a nice problem to have. If baristas are annoyed, or if it queues up the drive-thru, it is for the management to solve and staff up to meet the demand."