Retailer saves itself at the buzzer with TikTok 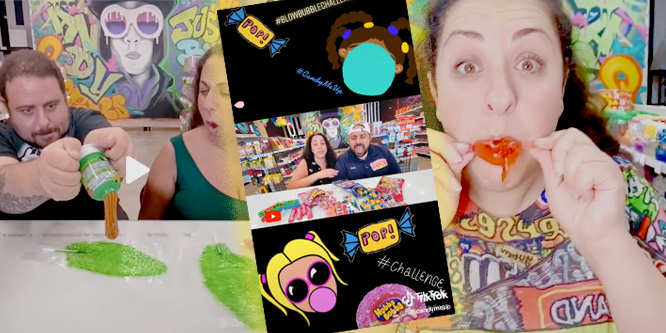 Early in the novel coronavirus pandemic, U.S. and global retailers found themselves needing to pivot in order to survive in a socially-distanced business landscape. San Diego-based candy retailer Candy Me Up was one of those businesses, and its pivot point was the app, TikTok.

In early March, Candy Me Up retail head Nema Causey saw a shutdown coming as the store’s primarily retail client-focused business had already begun to taper off, MarketWatch reported. Ms. Causey started a TikTok account as a way to try to draw a more contemporary audience and with her brother (who handles distribution for the business) began making short videos of themselves goofing around in the store. They also made a video for the viral “Jelly Fruit challenge,” in which TikTok users bite into the wrapper of the now hard-to-find type of jelly candy.

The amount of viral traffic the videos drew justified the first-time launch of an online presence for Candy Me Up. Ms. Causey quickly sold a pallet of 1,200 Jelly Fruits she had stocked up on.  While Ms. Causey had been slowly building an Instagram following over a decade, the store’s viral TikTok videos brought 40,000 young followers — and many paying customers — saving the business.

TikTok made headlines in August when President Donald Trump asserted the app was a national security threat due to it being based in China. Mr. Trump signed an executive order banning its use in the U.S., leading to a suit from TikTok. Meanwhile, Walmart and Microsoft partnered in a bid to acquire the U.S. as well as the Canadian, Australian and New Zealand wings of TikTok.

TikTok is not the first short-form video app to become popular in the U.S.

Vine, which was acquired by Twitter in 2012, exploded in popularity in the U.S. in 2013 and helped launch the career of a few big social media celebrities, The Verge reports. In 2014, Vine began to be outshined by services like Instagram and Snapchat. The company shut down due to lack of profitability in 2016.

DISCUSSION QUESTIONS: Do you think Candy Me Up’s experience with TikTok was unique or can other retailers use the app to attract new customers and drive sales? Will TikTok emerge as one of the most important social media apps for retailers?

Please practice The RetailWire Golden Rule when submitting your comments.
Braintrust
"If the brand story, target audience and brand voice aligns with what TikTok has to offer then I think it can be successful."

11 Comments on "Retailer saves itself at the buzzer with TikTok"

It’s a gross overstatement to say that TikTok will save retail, but it might save SOME retailers. Retailers with great stories to tell and an emphasis on visual storytelling can benefit from TikTok, or Instagram Reels, or the next short-form video app. Success here will be driven by the merchandising mix, the story of the products, and the creativity of the retailers.

I definitely think that TikTok is going to be just another social media channel where brands interact with the customer. As to whether it will emerge as one of the most important ones – it’s just way too early to say right now. Sure enough TikTok has been growing super fast in the last couple of months (especially due to COVID-19), but it also has a very specific target audience. Brands who don’t necessarily engage with Gen Z consumers may not be using TikTok as much in the present.

Retailers must embrace social media. It’s an effective and inexpensive marketing channel that can’t be ignored, especially as retailers tighten their budgets based on the rocky economy and hard-to-predict sales climate they find themselves in today. As for TikTok being one of the most important social media apps for retailers, it depends on the demographic. One retailer’s TikTok is another retailer’s Facebook.

TikTok will work. It can become a highly effective tool if used by the right people, for the right product.

The marketer must understand the audience. This is not a general audience. The demographics of TikTok are specific. The targeting has to be equally specific. Making short advertisements will not do the job. Follow the strategy and execution of Candy Me Up. It was perfect.

I would advise marketers to tread very carefully. Not only can they do the wrong thing in their execution. But it could have a negative effect on their target audience. I believe the teen demographic is perhaps the most difficult to market to properly.

Part of Candy Me Up’s success was jumping on TikTok early in the pandemic. There is also the fact that its product is attractive to Gen Z, TikTok’s primary users.

I think the jury is out when it comes to whether TikTok will work for traditional retailers. Will these retailers be willing to stretch to make the same sort of goofy videos TikTok users enjoy? And will TikTok users respond to the retailers that invading their space? 41 percent of TikTok users are between the ages of 16 and 24 — so if that’s your target market, go for it.

It’s great that TikTok saved Candy Me Up but that doesn’t mean that will be the formula for all retailers. If the brand story, target audience and brand voice aligns with what TikTok has to offer then I think it can be successful. Also, this app could supplement other more effective channels that are driving sales for the retailers.

TikTok is definitely having an impact on social media. The key is, can TikTok turn impressions into conversions? Brands have benefited by using other social media platforms like Instagram and Facebook. Hence this is not a new concept just a different social media platform. Note 41 percent of TikTok users are between 16 to 24 years of age. If you compare TikTok users’ buying power and consumer spending dollars to other age groups it is very small (<10 percent). However TikTok is a means to create rapid and instant brand awareness cost effectively as user counts increase on the app.

Walmart has a keen interest in TikTok (today’s news says it is still looking to invest in the platform) and that leads me to believe that there’s something there. Having products that align with the audience and making use of the video app’s storytelling potential (making funny videos playing with candy, for example) are the keys to success.

I believe Walmart has much bigger ideas for TikTok than a marketing tool. Walmart must look well beyond retail to grow their company. The TikTok technology is a generation ahead of that of Facebook and other social media. It could provide a leap for Walmart, not only in the United States but around the world in building a future.

If your brand and product have a story to tell, TikTok could be your new best friend, if the audience you want to reach is primarily Gen Z (today). This could change in the future, so retailers and brands need to keep up with social media developments and trends to know where their audience is. You have to be present where your audience is if you want to be seen, that fundamental principle hasn’t changed, it’s just leveraged by TikTok and other apps like it.

In this omnichannel world, retailers need to engage with consumers across channels. TikTok can become an important social app, but as we know many short-form video apps have been flashes in the pan (Vine), so the app alone is not sufficient. We should also expect apps from other big social players to improve and fragment the market. Success on any app requires influencers and engaging content — this is where retailers should focus their efforts.

Braintrust
"If the brand story, target audience and brand voice aligns with what TikTok has to offer then I think it can be successful."