Will women buy lingerie from Amazon? 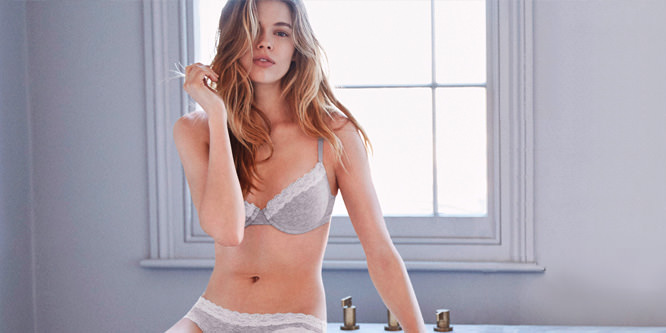 Amazon.com is already having success convincing consumers to buy a wide variety of clothing on its site. Now, according to news reports, it is looking to build on that performance with its own line of intimate apparel.

The e-tailer is currently selling bras in European markets under its Iris & Lilly private label. The line, which includes bras for under $10, could be an indication that Amazon plans to pursue market share in the U.S. where similar price points are at the lower end of the market.

Such a strategy would have Amazon going head-to-head with the likes of Target and Walmart for price-conscious consumers while undercutting department stores and specialty retailers such as Victoria’s Secret that have standard retail prices around $40.

Victoria’s Secret, as reported by The Wall Street Journal, had a tough 2016 with sales falling at the chain for the first time in seven years. The retailer was slow to adjust to consumers, particularly younger women, switching to sports bras and bralettes that are said to be much easier to size.

The Journal article pointed to the success Amazon has had in the apparel category. Fifty-eight percent of those surveyed last September by Morgan Stanley AlphaWise said they had purchased clothing from Amazon’s site over the previous six months, well ahead of second-place Kohl’s at 37 percent.

DISCUSSION QUESTIONS: How likely is Amazon.com to succeed with the introduction of a private label lingerie line in the U.S.? Which retail competitors do you think should be most concerned with an Amazon entry into the lingerie category?

Please practice The RetailWire Golden Rule when submitting your comments.
Braintrust
"I think that department and specialty store chains should take this seriously."

"I am skeptical that this will have significant uptake, particularly in categories that are highly intimate."

"If they can produce a good, quality product for a reasonable price, lingerie is just as much a commodity as socks."

16 Comments on "Will women buy lingerie from Amazon?"

If the price is reasonable, women are likely to order one. If the sizing is comparable to what they normally buy and they like the product, they are likely to continue. I do not see why there would be hesitation or an issue.

As Americans purchase more items online, Amazon continues to grow. Why not sell lingerie? Amazon is trusted, offering speedy delivery and hassle-free returns. All retailers in this space should be worried.

I would say they have a reasonable chance for success. If the entry is indeed at the lower-price end of the market then I’d expect to see them eat into the sales of lower-end retailers — including Walmart, Sears, J.C. Penney, various women’s retailers and maybe even Target. Taking on Victoria’s Secret may be another matter, since the appeal there is status and fit — two areas it may be difficult for Amazon to compete in, at least initially.

If Amazon can nail comfort (size, style, support), as price and convenience will be a given, they could absolutely make a dent in this space. I think that department and specialty store chains should take this seriously. Here comes a lingerie category price war …

Full disclosure: I spent almost 15 years merchandising intimate apparel at Kohl’s, and it’s a complex business. Customers tend to be brand-loyal (counting Victoria’s Secret as a brand) because the same bra size fits differently from label to label. So Amazon will need to be patient with customer trial-and-error while it builds its own private brand. Commoditizing a category on the basis of price — when it needs some sizzle to go along with reliable fit and comfort — may be a tougher challenge than selling apparel.

Fit is the key to this and some other product categories, with price and convenience being fast followers. When consumers know what they want it is basically a commodity purchase, but physical retail has a big role to play whenever the prospect of returns is high and discovery is an element of shopping.

I am skeptical that private label apparel will sell particularly well online due to shoppers’ need to see, touch and try on brands that they are not familiar with. However, if Amazon (or anyone else) can mitigate consumers’ buying risk, I could be proven wrong. Low prices are a good start, coupled with free and easy returns and consumers might not feel that they’re out on a limb. Finally, retailers could explicitly welcome customers to order adjacent sizes to ensure that they get exactly the right fit, knowing that there is no consequence in time and effort to send back the ones that don’t fit. But, again, I am skeptical that this will have significant uptake, particularly in categories that are highly intimate.

Amazon tries everything. And by doing that, they send us all scurrying around after them — giving Amazon far more control than reality should dictate.

So this may be smart or may not be. But at this point, it’s just one more thing they’re throwing against the wall. What we don’t hear much about are all the things Amazon shelves after a brief time on the market. Or the rumors I’m hearing of Amazon pushing large number of manufacturers out of their warehouses — I can only imagine in an attempt to reduce inventory costs since retail isn’t driving profit for them.

Remember, Amazon only makes profit on cloud services (60 percent+ of their profit), digital content and their devices. The rest of their business involves investors subsidizing Amazon’s losses.

So I recommend deep breaths here. This isn’t likely to be a big deal.

Sure, Millennials buy food and junk from Amazon, why not a bra? Smart ones will not and will go to the specialty store for bras. Some items that you wear have a real purpose and low price is not the focus. Amazon sells everything — it’s close to a huge garage sale or Walmart mixed with a pawn shop. You enjoy the experience with no real relationship development — just give them money.

I am just tired of Amazon and retail reporters promoting the stories that are not worth the read.

I’m one of the last to consider buying lingerie from Amazon but I’ve changed. Not because it’s Amazon but because I have become a lot more practical about things. If they can produce a good, quality product for a reasonable price, lingerie is just as much a commodity as socks. I don’t see them as a competitor to Victoria’s Secret but Target should be on the lookout!

Considering their already significant reach, and growing brand loyalty, Amazon will be a player to be reckoned with in the lingerie market. If the brand assortments, sizes, and overall experience is up to par with the competition, there is no reason that this will not be successful for Amazon. What will ultimately make this a very profitable endeavor for Amazon is their ability to provide a showroom-like experience, as they potentially roll out brick and mortar stores.

People in general continue to buy more and more from Amazon. Why should women be any different? Ultimately, people will buy from retailers that offer the best customer experience. Amazon’s broad assortment, competitive prices, and convenient quality service make for a great customer experience. Specialty retailers should not feel that their brand reputations are enough to keep customers from going to Amazon.

It’s a question of target demographics. This category commands brand loyalty among certain shoppers, but typically rising Gen Z and Millennial shoppers will switch brands if the fit, comfort, and value work for them. The return process is key here, since fit is the primary concern and an absolute requirement to switch brands regardless of price.

Makes sense for Amazon to try this given their success with apparel to date. Every brand in this category should be concerned and should watch closely what happens. Comparisons with Adore Me are sure to be interesting.

All retailers who sell lingerie should be concerned about Amazon’s foray into this category. We can be assured that price is very important to consumers, and Amazon can allow for privacy, great pricing and quality products for their consumers in this category, as they have done for all of the other categories which they compete in.

Those methods of shopping are even higher for Millennial females — 69.9%, 43.4%, and 22.1% respectively. Those online shoppers are seeking quality, selection, value, and a trustworthy retailer. Trust and a positive experience is high among female shoppers for Amazon, particularly among Millennial females.

Amazon will secure solid trial experience for the lingerie rollout. If female consumers have a positive experience with quality, selection, and value on this line, they’ll be back for added purchases.

They might want to skip the private label stuff if the search is for higher profit items. If the business plan is for a market share in this industry, then there is now room for doubt that Prime will get them in the double digits from shipments to remote locations. As we have seen in the past, this may only serve to erode margins in the industry and close doors instead of expanding demand.

Braintrust
"I think that department and specialty store chains should take this seriously."

"I am skeptical that this will have significant uptake, particularly in categories that are highly intimate."

"If they can produce a good, quality product for a reasonable price, lingerie is just as much a commodity as socks."