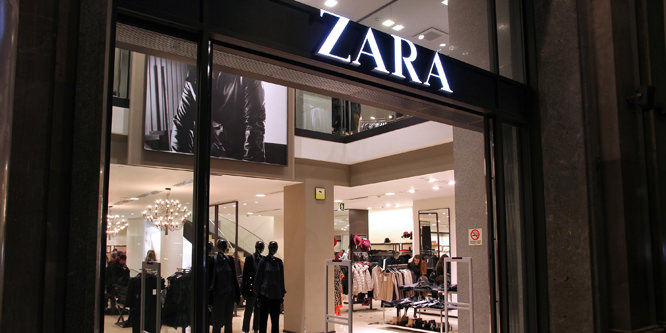 Consumers today, particularly younger ones, are notoriously fickle when it comes to their fashion purchases. Items that were flying off the racks a few weeks ago may already be heading for markdowns. That’s what makes a new Wall Street Journal story on the fast-fashion chain Zara so fascinating. The paper tracked the development of a new coat being sold by the chain, which went from prototype design to store racks in 25 days.

“The reason for Inditex’s success is short lead times: the ability to offer designs to the customer that other retailers do not yet have,” Société Générale analyst Anne Critchlow said of Zara’s parent company. Ms. Critchlow told the Journal that being first to market with new designs also enables Zara to charge more than its slower moving competitors.

Being fast to market, however, is not necessarily a guarantee of success. There were reports this summer of chains, including Forever 21, H&M and Uniqlo, slowing expansion plans to align operations with marketplace realities.

Old Navy, which sped up its supply chain and achieved four consecutive years of sales growth through the end of 2015, has struggled since former president Stefan Larrson left to join Ralph Lauren in October of last year. In November, the chain reported a decline of two percent in comparable store sales.

The need for speed has not been lost on department stores either. As the Journal reports, J.C. Penney adjusted its supply chain to cut the time to get clothing to stores from 10 months to eight. While an improvement, it’s nowhere near the bar set by Zara.

Penney, for its part, has claimed that it is having success in attracting Millennial women. The chain, whose average customer is 51 years old, according to Kantar Retail data, has said that its “emerging customer base” is comprised largely of younger women. This group accounts for 45 percent of its revenues. The chain, according to a CNBC report, points to its own fast-fashion brand, Belle & Sky, along with Sephora shops inside its stores as factors in attracting new and younger shoppers.

DISCUSSION QUESTION: How important a factor is speed-to-market for clothing retailer success today? What will it take for retailers using more traditional sourcing techniques to compete with Zara and other fast-fashion chains?

Please practice The RetailWire Golden Rule when submitting your comments.
Braintrust
"Speed is critically important in fashion these days, but it does increase the risk of overstocks and out-of-stocks."

"We live in a nanosecond world in which immediate gratification cannot happen fast enough."

"This one fact changes everything: Choosing “key items” and planning inventory six or more months in advance no longer makes sense. "

15 Comments on "Zara succeeds with speed"

Speed is critically important in fashion these days, but it does increase the risk of overstocks and out-of-stocks when bets are made by the brands on their own historical data and trend data. That data of course is always backwards-looking. But, as I’ve written about before, there now is forward-looking data in the form of alert opt-ins by individual shoppers that can specify exactly what the customers are interested in seeing from the brand in the future. For instance, new items that have certain criteria matching current items (or missing from current items). The apparel brands who are capturing this first-party data are reporting significant drops in out-of-stocks and overstocks.

I think the idea here is that out-of-stock isn’t the worst thing that can happen. The Wall Street Journal article mentions that Zara produces a limited amount of any set style. Once they sell out, they’re out. This increases customer demand and the “see it now, buy it now” business model becomes “buy it now, or someone else will.” Remember, Millennials want unique product.

Jasmine, good point. We are finding that sending the message “Sorry, we’re out” can be strengthened with a simple opt-in for something like, “Alert me the next time a similar item is available.” Going further, the opt-in can be, “Select what features you would like to see for alerts the next time we have similar items” with a checkbox of options.

Absolutely. Creating and managing scarcity can be one of the retailer’s best friends. Selling out of a high-risk novelty or seasonal item is good news, not bad news.

From my vantage point, speed does not increase the risk of overstocks/out-of-stocks. Quite the opposite. One of my mantras is risk mitigation — being less wrong on fewer SKUs for a shorter amount of time. Sure the data is always backwards-looking, but is it last year’s data or last week’s data? The more data (current testing) that can be included in assortment decisions, the better. And if that data helps refine the decision-making process on high-risk product, then margins are all the better for it. You can have frequency of offering and still be creating product a year out. Zara has made data and speed-to-market best friends.

It is by no means the full solution, but more retailers have to get better and more aligned with omnichannel selling. This lets them get product information, photos and videos up on their e-commerce sites immediately and have the product in stores for customers to come in to check it out physically (feel, look, sizing, weight, quality of manufacturing/stitching.).

No surprise, a critical piece is improving and aligning our retail technology. I am stunned that only 18 percent of retailers today provide customers with visibility to their in-store stock (and have fulfillment optimizing ability). A big step to compete is to strengthen retail’s core technology to start doing the basics like showing inventory online. If your customers don’t know you have it, then speed-to-market won’t matter.

I teach an undergraduate business class in retail management, and the class recently discussed the Zara business model. Even before the Wall Street Journal article appeared, the students correctly figured out that speed is Zara’s biggest competitive advantage — along with its design-to-manufacturing model that is more vertical than its competitors. Other “fast fashion” retailers (H&M, Forever 21) move product to their stores pretty quickly, but traditional department and specialty stores have a harder time layering “speed” on top of an existing model based on long lead times and too many private brands.

As to the risk of inventory overages, the fast fashion retailers use speed as a weapon to avoid big mistakes. Zara, for example, can exploit a trend faster than its competitors while at the same time taking markdowns to clear the decks for the next big idea.

Most shoppers love what is fresh and new. The more often a retailer can turn their sales floor the more often these shoppers are going to stop by to check it out — then buy. Especially at the right price point. This model doesn’t mean quite as much to higher-end clothing and providers of those staples in the closet that can last a long time. It is for the filler pieces that fill out the wardrobe and can be replaced often, affordably.

It’s not just about speeding up the supply chain and that is why I am using the word “turns” instead of “speed-to-market.” Zara makes all of their clothing in one location in Spain that they own and control. Their store employees have access to influence new designs directly. They listen to their customers and pass new design ideas to Spain. If the product isn’t what the customer wants then it doesn’t matter how fast it gets there, right? They truly have a model for success.

Speed-to-market is and has always been of great importance. However, for many years, “speed” meant six months from prototype to reality. Many apparel retailers have prided themselves on always offering fresh merchandise every couple of weeks. They see freshness and variety as an important competitive edge, and their customers typically reward those retailers by shopping their stores. Imagine now being able to stay closer to the trends and sell-through before the retailer makes a commitment to a particular style. If the retailer’s prototype-to-market cycle time is only 60 days or 30 days, that retailer can market products where it has seen positive response, emerging trends, etc.

Speed-to-market is a retailing requirement — not just for clothing but for products across the board. We live in a nanosecond world in which immediate gratification cannot happen fast enough. Offering new products from small entrepreneurial start-ups on a consistent and regular basis can provide the basis for that retailer to become a destination for shoppers. Shoppers want to discover — remember “surprise and delight”? Giving shoppers the ability to be the first to discover the latest thing can be empowering. Using various tracking technologies from manufacturing all the way through to the rack can enable the most efficient process to speed up the entire supply chain.

Speed-to-market is good but if you have the wrong item, delivering it faster doesn’t help. There is also some pushback on fast, disposable fashion as consumers become more environmentally conscious. Zara has managed to walk the line of fast but decent (it doesn’t fall apart after a few washes) and when the item sells out, they move on to the next line.

Speed-to-market is critically and uniquely important to clothing retailers (and wholesalers) for one big reason — fashion trends are now dictated by consumers and social media influencers (not retailers). This one fact changes everything: Choosing “key items” and planning inventory six or more months in advance no longer makes sense. Retailer-dictated trends are taking a back seat. The need for speed, rapt attention and quick reaction to social media-driven trends is everything. Zara’s business model is built for this. Others are finally realizing that they can’t shape consumer behavior to fit their antiquated models.

In women’s fast fashion, speed is critically important because of the enormous influence of social media. Instagram’s capabilities to spread a trend like wildfire is one example. It’s important for retailers to have complete understanding of the full sales cycle of each product. Layering product sales cycles to avoid dips will keep sales consistent, fashion fresh, and trends stoking sales.

Yes speed certainly is a factor in both supply chain and innovation and design. However, I would argue the speed counts more toward the front end of the supply chain. So, it’s how fast they can effectively market and sell a new fashion idea to the market they serve while being able to fulfill the needs for this product once it does catch on.

Smart systems which automatically decide based on consumer demand which products should be ordered are the way to go. Zara may have a streamlined supply chain, but without demand, you don’t need to worry about supply. As Mark Cuban said “sales cures all.” The ability to test new designs and quickly decide whether they will work or not, and quickly being able to kill or keep a particular design is what sets brand-name retailers apart. Much of this comes through technology that crunches the data to decide which products go to manufacturing and which stay a limited test of an idea.

Speed to market for products will be successful more often when brands use a “data driven design” approach. Insights gathered should drive what is manufactured, then using targeted segmentation for product assortment/merchandising and followed up by a more substantial measurement and analytics view (past simple transaction data) will help brands research, design, deploy and sell faster, with greater results. It needs to have a holistic view to the approach.

Braintrust
"Speed is critically important in fashion these days, but it does increase the risk of overstocks and out-of-stocks."

"We live in a nanosecond world in which immediate gratification cannot happen fast enough."

"This one fact changes everything: Choosing “key items” and planning inventory six or more months in advance no longer makes sense. "