Is fast-fashion slowing down? 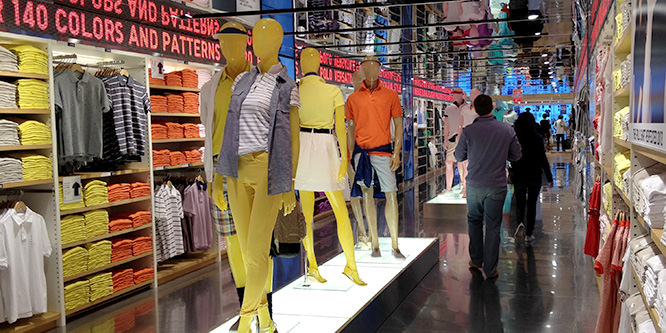 Recent stumbles from key fast-fashion players have some wondering whether the fast-turn, disposable trend has hit a speedbump.

It’s tough to gauge the health of the trend with overall apparel retailing in the doldrums, hurt by mild weather over the holiday season, heightened online competition, a shift in spending toward eating out and vacations, and other factors. Zara also continues to do well, perhaps due to its higher-end positioning. But the fact that a few fast-fashion chains are slowing their growth may mean that they expanded faster than warranted. Fast-fashion may also be largely suitable for major cities given that all of Uniqlo’s closings focused on suburbia.

The bigger question is whether the business model — tied to frequent, smaller deliveries of runway knockoffs — has some kinks. The Wall Street Journal said H&M’s localized model, for instance, forces the company to “rapidly open stores in new markets to justify the cost of local distribution centers, merchandising and property teams and other infrastructure it opens in every market.”

The trend also runs counter to the sustainability and better-quality trend being championed in food and other sectors. Some question how the cheap items can be made ethically and rage against the eco-damage of such throwaway items.

“It comes back to how delightfully cheap everything is,” Abigail Glaum-Lathbury, assistant professor of fashion design at the School of the Art Institute of Chicago, told the Chicago Tribune last November on fast-fashions’s allure. “If something is $5, there’s no downside, but that is a problem on another level. That kind of mentality, that’s not how we treat people and our friends and that’s not how we should treat the environment and our limited resources, especially in the face of global warming.”

DISCUSSION QUESTIONS: How do you explain the recent struggles that fast-fashion chains are having? Do you still see fast-fashion making gains against the traditional apparel model in the years ahead?

Please practice The RetailWire Golden Rule when submitting your comments.
Braintrust
"There are only so many doors, stores and brands that the consumer can actually consume. Right now, there are simply too many. "

"Prospects can only drink so much; there’s a difference between a faucet and waterboarding. America is over-stored and under-customered."

"Just the fact that the term “fashion” is used to describe this category of retail should be your first clue."

11 Comments on "Is fast-fashion slowing down?"

Fast-fashion retailers (especially Forever 21 and H&M) have expanded very quickly as real estate has become available during the past five years. (This includes Forever 21’s move into some vacated mall anchors.) They are probably finding — like other brick-and-mortar retailers — that there can be too much of a good thing when it comes to square footage. And some of those store openings have been in regional malls that are in decline anyway.

it doesn’t help matters — during this period of over-expansion — that fast fashion retailers are suffering from the same malaise as department stores. (Only the off-pricers seem somewhat immune right now.) Given weak demand for apparel, and the lack of a sales-driving trend, it’s tough for most fast-fashion stores to gain traction.

I think it’s not about the segment itself, it’s about the continued presumption that markets are infinite. There are only so many doors, stores and brands that the consumer can actually consume. Right now, there are simply too many.

I expect the herd to be winnowed in the coming year and then the segment will bounce back.

Fast-fashion is seeing the same kinds of decreases that many apparel stores are seeing as the consumer shifts to online purchasing and as the younger generation matures and creates a spending impact on the retail picture. We can expect to see more online shopping, fewer traditional store purchases and continued changes in the traditional apparel retailing market as consumers take advantage of online’s ease and convenience.

in the end, demographics impact spending in this category. Fast-fashion is probably the last segment to be impacted by online, so brick-and-mortar segments are less affected than books or electronics. If the segment is down then there’s nothing new or fewer people buying.

Just the fact that the term “fashion” is used to describe this category of retail should be your first clue. The very meaning of the word and even the industry itself is about something that comes and goes. If you’re hot now, you’re not hot later. That’s just the nature of the beast. And a fashion retailer can become consistent by hitting the right fashion in different departments at different times and, sometimes, you can hit them all at once and be on fire. But with the likelihood that you’ll hit them all at once comes the opposite scenario: you miss them all at once. And you’ll see both happen to fashion retailers over a period of time if you pay attention. And let’s not downplay talent. If a retailer has someone with a great eye for what’s next, that can and will make all the difference in the world. But even that’s fleeting. People change jobs or get burned out. Another factor is category or “look” heat. When khakis and cargo bottoms were fashionable,… Read more »
1
|
0
-   Share

In general fashion retailers are always at risk because of seasonal and stylistic changes. For fast-fashion this risk goes up as there are more chances to get trends or inventory predictions incorrect. With the pressure from investors to generate returns, some of these companies scale too quickly without fully mastering all aspects of the supply chain. The consequences can be disastrous to the bottom line. I believe one of the key attributes that separates the winners from the losers is the level of commitment to being customer-centric. Look no further than reviews about a retailer and it is easy to spot who says they are customer-centric and who actually makes changes to be customer-centric. From there flow policies and decisions that increase customer retention and profitability. Companies that maximize profits too early pay the price of having customers that like them, versus customers that love them. The business model of fast-fashion still has a lot to prove, but it also has a lot to learn. I think the market is still being defined. But in… Read more »
2
|
0
-   Share

Millennials, a key market for fast fashion, care more about sustainability, adventures and experiences than apparel. That’s why restaurant sales are up.

“Struggles”? That seems a stretch, unless your definition of the word is going from rapid growth to moderate growth. That having been said, once an industry — or in this case really a sector of the industry (women’s clothing) — reaches a saturation point, its growth will reflect the overall economy … which of course has been slow for a long time.

“Fast fashion” is an industry term. It has little to do with customers. Nor do I believe consumers see it in conflict with sustainability.

Prospects can only drink so much; there’s a difference between a faucet and waterboarding. America is over-stored and under-customered.

Fast-fashion may appear to be slowing down, but it is probably more of a function of some retailers feeling the pinch of more competition or over saturation in the marketplace. I think there is still a strong market for value-priced fast fashion. Today’s younger consumers are shopping discount brands and fast-fashion retailers because they don’t want to spend $200 on a sweater when they can get a similar one for $20 and wear it a few times and get a different style or color next month.

The success of Zara, with 2016 Q1 sales up 12%, and Primark demonstrate that there is a demand for fast fashion. The retailers that have the right combination of product, assortment and price strategy will continue to be successful in this space. As with any retail category, there are winners and losers.

Braintrust
"There are only so many doors, stores and brands that the consumer can actually consume. Right now, there are simply too many. "

"Prospects can only drink so much; there’s a difference between a faucet and waterboarding. America is over-stored and under-customered."

"Just the fact that the term “fashion” is used to describe this category of retail should be your first clue."