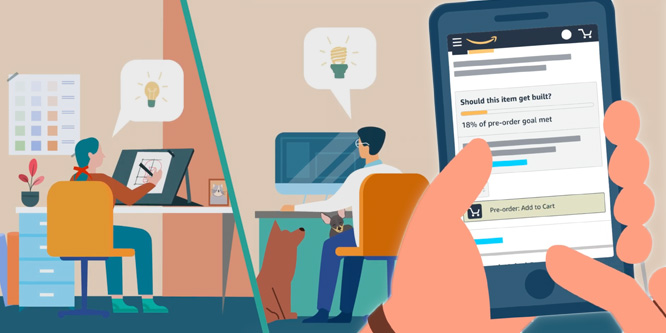 Amazon launched a new program, “Build It,” that in a crowdsourcing scheme enables consumers to vote on which Alexa-enabled products will be developed.

Built It represents the extension of Day 1 Editions, an invitation-only program that offers a select group of consumers the chance to purchase an in-development product at a special price. In exchange for the discount, the buyers provide early feedback to Amazon so the team can review any flaws while gauging potential demand for a rollout. Day 1 Editions led to the 2019 launch of Echo Frames smart eyeglasses and Echo Loop smart ring.

Build It, which is open to anybody, is more geared toward accessing potential demand and apparently creating some buzz around launch.

Consumers participating in the program are offered a chance to pre-order in-development products at a special price as long as enough others pre-order, mimicking a Kickstarter campaign. If the concept reaches its pre-order goal in 30 days, Amazon will build it and those pre-ordering over the 30-day period receive the item at the discount price. The price increases when fully rolled out.

If the pre-order goal is not met, Amazon does not build the product and does not charge the consumer. A progress bar shows how far along a product is towards its pre-order goal. Amazon wrote in the blog entry, “It’s low risk, high reward, and a whole lot of fun.”

The Build It program launched with three Alexa-enabled items on Feb. 17. A Smart Sticky Note Printer reached its 30-day pre-order goal within three days. The item will ship between July and September.

By Sunday, a Smart Nutrition Scale was 42 percent toward its pre-order goal and a Smart Cuckoo Clock, 37 percent. The special promo price is available for 30 days regardless of whether the goal is reached. Amazon doesn’t indicate how many pre-orders are necessary for launch.

Amazon has long been a believer that embracing failure can drive innovation. Its clunkers have included the Fire Phone and Dash button. In recent years, the company has rolled out a stream of Alexa-enabled devices and new capabilities to support its Echo platform.

DISCUSSION QUESTIONS: Do you see more benefits than drawbacks to Build It for Amazon? Does this type of process offer enough appeal to consumers for broad use in testing products?

Please practice The RetailWire Golden Rule when submitting your comments.
Braintrust
"Build It proves Amazon really listens to consumers – with Alexa’s help. The low-risk drawback of copycat suppliers pales in comparison to the benefits Amazon stands to gain."

"Let’s say Build It takes hold in the marketplace fueled by Alexa. What happens to innovation fueled by startup minds outside of the Amazon wealth complex?"

"This is a conundrum! I love this. I want to participate. But I have no interest in allowing Alexa in my home."

13 Comments on "Amazon is using crowdsourcing to create new products"

Amazon’s Build It program is a clever way to test market products. It offers a good base of interested customers to test and evaluate new product concepts before rollout to identify the market viability. I don’t see any drawbacks to this approach.

Involving consumers in the process of creating new products is valuable as feedback can be used to optimize designs. It’s rather like the beta testing program for new software launches which enables developers to iron out any bugs. That said, if I were buying a pre-release product that potentially has flaws, I’d want a pretty big discount or the promise of a free final release version once it was developed.

The Build It program reminds me of Kickstarter crowd-funding for new products. This has worked really well for many niche companies looking to launch new products and I see it working well for Amazon. Of course Amazon’s intention isn’t to raise money, it’s to gauge demand and to create a buzz around new ideas. All part of boosting engagement with the brand, and gathering more data and insight!

More data. Less guessing. Faster, smarter to market. What’s not to like?

This is a conundrum! I love this. I want to participate. But I have no interest in allowing Alexa in my home.

Build It proves Amazon really listens to consumers – with Alexa’s help. The low-risk drawback of copycat suppliers pales in comparison to the benefits Amazon stands to gain.

Build It offers an effective feedback mechanism to gauge product popularity before investing in a full launch. Co-creating with users to get product development right improves the odds consumers will actually buy the end product. This process can boost Amazon’s certainty and speed to market, and generate early demand, buzz and reviews.

What pops out most: Build It reinvigorates voice commerce. Each innovation is a cute, smart home device as Amazon eases us into digitizing more of our homes and embedding Alexa into our daily habits.

Overall, Build It will likely appeal to more than early adopters and consumers who seek early bird rates.

Build It is a great program for obtaining feedback data on new products. Instead of taking the risk with a new idea and building the products before they get to market, Amazon gets early feedback with little risk. In addition, Amazon will be building a record of ideas that work and do not work that will help define new products in the future.

The appeal to consumers for the Build It program comes from the low cost for purchasing products for testing. Plus the purchaser has some interest in the product before purchasing it. Build It will be a successful program for Amazon.

You have to think that Amazon not only tested the concept of asking consumers’ opinions, but also the resulting purchase. It’s a smart idea and a marketing tool as well.

This is very smart. Almost like the early days of Quirky, but with much greater scale. It would be especially cool to launch something like this for its marketplace SMBs as a way to better leverage its network to compete against Shopify and others. Sharing product data between retailers and brands is a huge open opportunity.

This is Amazon’s implementation of a Kickstarter program. They get to test the waters on what customers are willing to buy, use that data to drive future product development while offering pre-order customers a discount, and have them provide reviews to fuel other customers’ purchase intent. This is a very smart way for Amazon to continue experimenting with product design and feature sets while marketing new product concepts in a less risky manner. From the customer’s perspective so long as the discount is significant enough, and they too are willing to “experiment” it’s a win-win for both.

I am glad Amazon is closing the gap between new product launch decisions and customer feedback. I hope a larger number of brands take notice and incorporate this. If brands look at it closely, they have customer data that can already give high-quality input on the broad direction of which categories will make sense. A combination of market research and Kickstarter-style campaigns can plug the rest.

Will Amazon Build It reduce consumer participation in crowdfunding platforms like Kickstarter, Indiegogo, and others? Will Amazon take their “smile” share out of bootstrapping startups seeking to fund their own initial product? Is there or will there be enough bandwidth to go around for innovation outside of the Amazon behemoth?

Let’s say Build It takes hold in the marketplace fueled by Alexa. What happens to innovation fueled by startup minds outside of the Amazon wealth complex? Entrepreneurs scratch out innovation, risking their livelihoods and lifeblood in pursuit of real innovation. On the other hand large corporations, with well-paid project teams, have corporate culture blind spots and other internal motivators gauging their success which in many cases has little to do with true innovation. This is why startups are responsible, like Amazon once was, for true innovation.

Fascinating. Amazon certainly has the right platform and reach to do this. It also potentially has much more consumer trust than other platforms. The idea crowd-sourcing approach has been really successful for some — for example, Lego’s Ideas has created some incredibly successful products.

It will be interesting to see how this model develops but I do not see it as a threat to existing sellers or competing products. I see it more as a great way for Amazon to build research into market gaps. This is something retailers should be doing themselves.

Braintrust
"Build It proves Amazon really listens to consumers – with Alexa’s help. The low-risk drawback of copycat suppliers pales in comparison to the benefits Amazon stands to gain."

"Let’s say Build It takes hold in the marketplace fueled by Alexa. What happens to innovation fueled by startup minds outside of the Amazon wealth complex?"

"This is a conundrum! I love this. I want to participate. But I have no interest in allowing Alexa in my home."