Amazon steps up on climate change, sort of 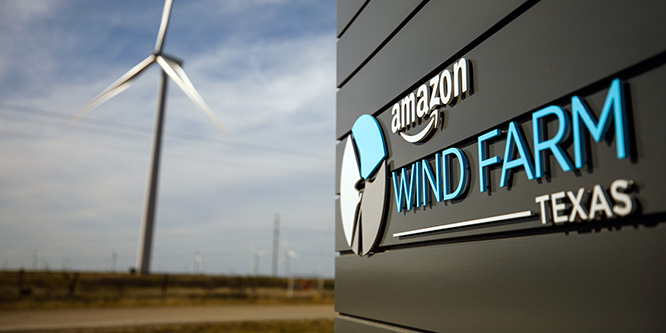 As scientists continue to say that the climate change forecast is worsening, Amazon.com has been blamed by many for its negative impact on the environment due to its near-immediate delivery of products ordered online, data centers that use large amounts of energy and its work with energy companies via AWS.

While the U.S. government is planning to pull out of the Paris climate agreement late next year, Amazon committed last week to meet the agreed upon goals 10 years early and become carbon neutral by 2040, according to The New York Times’ coverage of a Jeff Bezos talk at the National Press Club.

As part of his rationale for change, Bezos said that climate change forecasts are now significantly worse than they were just five years ago.

About fifteen-hundred employees walked off the job last week in conjunction with climate protests around the globe, as part of actions by a group called Amazon Employees for Climate Justice, which has been pressuring the company for nearly a year.  Employees demanded that Amazon get to zero emissions by 2030, stop offering cloud computing services to help the oil and gas industry find more fossil fuel sources and stop donating to politicians who deny climate change.

Environmental groups were skeptical of Amazon’s pledges and emissions reporting, expressing concerns that it has been too vague in both areas.

Mr. Bezos did not meet employee demands. He said Amazon would continue to help energy companies as they “transition,” would take a “hard look” at donations and did not endorse the Green New Deal.

Amazon, as reported by Gizmodo, intends to use 80 percent renewable energy by 2024 (100 percent by 2030) and is donating $100 million towards a reforestation project. Gizmodo criticized the announcement, in part, because Amazon has not yet met its pledge from 2014 to power all its operations with clean energy, as it has only hit the 40 percent mark five years later.

In February, Amazon invested $440 million in Rivian, the electric vehicle maker, and hopes to have 10,000 vehicles in service by 2022, although no vehicles have been produced so far.

DISCUSSION QUESTIONS: As the U.S. leader in e-commerce and web services, should Amazon do more to fight climate change? Do its recent announcements go far enough?

Please practice The RetailWire Golden Rule when submitting your comments.
Braintrust
"I have just one word to say to Mr. Bezos -- packaging."

"Jeff Bezos is a brilliant guy, but he’s making a critical human error with a non-aggressive stance on climate change."

"Most of the carbon emissions from shipping in the U.S. come from trucks moving goods across regions delivering boxes to our front doors."

15 Comments on "Amazon steps up on climate change, sort of"

Something has to be done, and every single one of us – not just Amazon – needs to do more to respect our dwindling natural resources and the overheating planet we call home. Pledges like those reported from Amazon are a good first step, and I hope they inspire others to follow suit. However, pledges are nowhere near enough. Pledges are merely promises, and promises without enforcement aren’t worth much more than the newsprint they are printed on in Bezos’ newspaper. Our government needs to act, and act swiftly. Sadly, I have no faith that the remarkably dysfunctional politics of climate change will allow meaningful action to occur in time to avoid dire consequences.

Maybe Amazon should step up to save the Amazon rain forest.

I have just one word to say to Mr. Bezos — packaging.

Never, ever have a seen a company so environmentally (and financially, to be honest) irresponsible about the way they deliver their products. Amazon Fresh has boatloads of coolant around every frozen item, the company ships air (wasting space and fuel) — it has actually become an issue for me.

Fix. The. Packaging. Of. Your. Deliveries.

All the rest is just noise.

If anything, my company will need to ADD packaging to comply with Amazon’s new 1P requirements. Ugh.

Most of the carbon emissions from shipping in the U.S. come from trucks moving goods across regions delivering boxes to our front doors. UPS, FedEx, and DHL all have plans in place to reduce their carbon footprints significantly within the next decade — and they communicated them/have been working towards them for a while. Amazon is arguably the largest producer of emissions. To address the concern over their carbon footprint, they unveiled Shipment Zero in the early part of 2019. Shipment Zero is an effort to make all of Amazon’s shipments net zero carbon, and 50 percent zero carbon by 2030. Part of the concern is that it’s not clear how Shipment Zero will work, and if it does work, it still doesn’t make as big of an impact as the plans UPS, FedEx, and DHL have proposed — and it is late to the game.

As far as I can tell, they have no plans and have made no efforts. Buying their own planes and vans solves nothing. If the pros are running slow, what makes Amazon think it can do better? Either way, it’s packing the boxes.

Every single firm has a social and environmental responsibility to do their part to help fight climate change. While it’s commendable that a company of Amazon’s size is pledging to step up on climate change, any impactful environmental protection will require the collective contributions of every business, even if there is a measurable impact to their bottom lines. Amazon last Thursday announced it would make its operations carbon-neutral by 2040 and run entirely on renewable energy within a decade.

This is only the beginning and so much more meaningful actions have to be enforced by government agencies. Without the necessary regulations, companies could pledge, believe in the spirit of the movement, take their time and not execute against their promises for years or decades. Yet there is hope, as my kids’ generation in elementary school is learning all about climate change and the impacts they could make at the grassroots level. They are even teaching me what they learned, and how we could make a small impact in our own home.

Al Gore made more money claiming the world is in peril than anyone in history, and real facts matter to me. Some Democrats want to pass this “Green New Deal” which will save our planet, and all will be well. Really? The earth has changed from several cool downs and warming trends just in my lifetime, and yet the end is near according to politicians like AOC. If that’s true then I’m Santa Claus. Scare tactics only work on those who are uninformed. We have cleaner water, better quality air, and more trees than ever in this country, as Capitalism is the engine for making everything better here. Our contribution as a nation to the global pollution is less than 4 percent of the total mess, and one volcano contributes more CO2 than all of mankind does, and plant life absorbs it for their needed growth. Can we do better? Absolutely, and there are companies right now working on plant-based bags and packaging, which is in the very near future becoming affordable for the masses.… Read more »
7
|
-15
-   Share

That photo of trash left behind by climate change protesters was a viral hoax.

Of course, but then every company involved in any form of commerce — and all their customers — also need to, ” … do more to fight climate change.” And by the way, this isn’t a question of the dubious “do well to do good” approach to growing market share — it’s an imperative, motivated by self-interest if nothing else. Further climate destruction will result in fewer customers, less disposable income being put into discretionary spending categories and, eventually, the death of the majority of current and future customers. There won’t be much commerce of any kind left if large portions of the world become unlivable. As to what “far enough” looks like, given where we are today it’s hard to imagine any proposal goes far enough. And at any rate, there is no such thing as being too energy efficient and making the Earth too livable. We have a crisis and our children and grandchildren will have a nightmare — or worse — if everyone doesn’t do what they can now, while there is… Read more »
3
|
-1
-   Share

It takes little courage to promise to be carbon neutral in 2040. Likely, Amazon will be (at best) a shadow of its former self by then.

This is a circus trick designed to get headlines. Well, they got the headlines. But we don’t have to buy in and give them credit for a non-action.

I wonder what the carbon cost of making 100,000 new electric vehicles is?

This is not an Amzon issue alone. It is an issue for everyone.

Aiming to be first and doing the most in eliminating carbon emissions is not necessary because someone else can always do it faster. However, as the leading e-commerce site, Amazon needs to be in the group of e-commerce sites and retailers in their efforts. Adhering to the Paris Convention standards, and doing so earlier than required, is important.

Jeff Bezos is a brilliant guy, but he’s making a critical human error with a non-aggressive stance on climate change. Every human on the planet should be concerned and involved in reducing the detrimental footprint we’re leaving on our environment. When, not if, the Amazon workforce disappears into more sustainable companies, he’ll be sorry but much too late.

Looks like Bezos has become well-versed in politician speak. It feels like Amazon is trying to do just enough not to get singled out as a laggard on the issue without making the type of drastic changes that could actually benefit the planet in the long run (and cost Amazon in the short-term).

As Gen Z and the rest of the world radicalizes in response to imminent and undeniable climate change, I wonder how much longer retailers like Amazon will be able to drag their feet on these issues.

If I’ve said it once I’ve said it a million times… we vote with our dollar. So will consumers be as willing to sacrifice convenience for the benefit of the environment as they were to take a day off of work to march? I think Gen Z will because they face the strongest repercussions from climate change in their lifetime. As for the rest of us… hopefully, we won’t wait until it’s too late to change our purchasing habits.

Braintrust
"I have just one word to say to Mr. Bezos -- packaging."

"Jeff Bezos is a brilliant guy, but he’s making a critical human error with a non-aggressive stance on climate change."

"Most of the carbon emissions from shipping in the U.S. come from trucks moving goods across regions delivering boxes to our front doors."