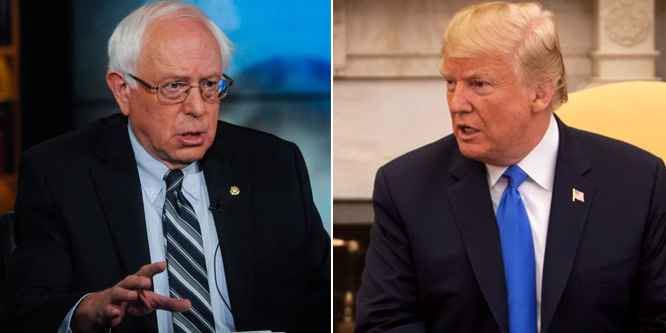 Few individuals have earned the wrath of both Bernie Sanders and Donald Trump. Amazon.com CEO and founder Jeff Bezos is one of them.

For the last few months, Mr. Sanders has contrasted the wealth of Mr. Bezos with reports that Amazon warehouse workers are paid less than industry averages, rely on food stamps and toil in “dangerous” environments.

In early September, the Vermont senator co-sponsored new legislation that would tax corporations such as Amazon for every dollar that their workers receive in government assistance. The bill is called the Stop Bezos (Bad Employers by Zeroing Out Subsidies) Act.

President Trump’s beef against Amazon appears centered on Mr. Bezos’ personal ownership of The Washington Post (the e-tailer does not have a financial interest in the paper), once posting a tweet describing the publication as Amazon’s “chief lobbyist.” Mr. Trump has also charged Amazon with receiving advantages in tax and shipping rates.

While Mr. Bezos in an interview last week strongly defended the press, Amazon has generally not responded to Mr. Trump’s attacks.

A CNBC article speculated that Amazon responded to Mr. Sanders’ charges and not Mr. Trump’s, in part, because wage issues are more relevant to Americans than taxes and postal rates. Trump’s political power was seen as another reason. Pallavi Kumar, a communications professor at American University, told CNBC, “If they engage with Trump even one time, they will escalate into a Twitter war with no end in sight.”

Some now see that the choice of Amazon’s second headquarters, expected by year-end, could be partly politically-motivated. Three locations in and around the nation’s capital are finalists.

With Amazon’s market cap second only to Apple and Mr. Bezos earlier this year declared the world’s richest man, greater scrutiny is expected.

DISCUSSION QUESTIONS: What advice would you have for Amazon when it comes to managing political heat? Are the attacks being faced by Amazon of a different character than those pointed at other retailers, such as Walmart, in the past?

Please practice The RetailWire Golden Rule when submitting your comments.
Braintrust
"Amazon should manage political heat through statements of facts about the company."

"Let’s face it, Bezos’ ambitions go well beyond Walmart and any other retailer. Is Amazon really even a retailer? "

"Rule #1 of propaganda warfare is do not respond to negative propaganda — you never win."

Rule #1 of propaganda warfare is do not respond to negative propaganda — you never win. So Amazon would do well to have “no comment” except for purely factual and verifiable statements.

Gee, politicians are so annoying!

Mr. Bezos has a first amendment right to own the Washington Post. The Trump administration should respect that and not use its power to threaten the Amazon business because WaPo says things that it might not like. It’s both unconstitutional and childish.

As for Bernie, while he seems nice enough, I think he’s pretty clueless in terms of how the real world works. Amazon, like Walmart before it, has created growth, jobs, opportunities and prosperity. It has also provided a great service that customers love using. If conditions and pay at Amazon’s establishments was so dire then they’d never get so many people to work there – not in this kind of labor market.

I’ll posit that most of politicians’ attacks on Amazon are politically motivated. That said, it’s indefensible for giant companies to pay a wage so low that the government has to feed those workers. In 1974, I was working for a government agency and making roughly what the minimum wage is today, 44 years later. We have to fix this.

Amazon should manage political heat through statements of facts about the company. Like their response to Bernie Sanders, where they pointed out the facts about the pay of their employees, facts cannot be disputed or argued with as a political response would be.

Some of the attacks being faced by Amazon are similar to those of other retailers — employee benefits and pay, work hours, etc. But some are unique because Amazon is a unique company with a new business model and being very successful at what they do — being the largest online seller with market impact, security and privacy concerns, etc.

The old adage “where there is smoke there is fire” likely has some truth here given the enormous scale and time-sensitive ambitions of Amazon. Let’s face it, Bezos’ ambitions go well beyond Walmart and any other retailer. Is Amazon really even a retailer? In fact, based on Amazon’s entries to almost every aspect of human life, from pharmacy to cars to Mars, Amazon’s monumental ambitions surely leverage the lives of warehouse and delivery workers to give Amazon customers instant gratification. As I understand it, AWS is the profit center for Amazon, funding it for years now, the ability of Amazon to enable the Prime program and all the other goodies for-profit retailers cannot afford to GIVE its customers. I say plainly speak to people and embrace those whose physical hard work enables the true retail success of Amazon.

The “threats” Amazon and Bezos are facing are quite different. The Twitter attacks from Trump are simply childish and bordering on foolishness simply because Mr. Trump doesn’t like what the Post writes about him. It’s just based on ego. While the Bernie Sanders attack is based more on perceived labor conditions we occasionally hear about in the press concerning Amazon’s warehouses. In this case, Amazon does need to respond but be careful to only respond with facts about their work environment. Could they do more here? Possibly. Mr. Sanders’ accusations here while seemingly well-intentioned, seem a bit odd to me. While we do hear stories of difficult conditions at those Amazon warehouses, it appears that people are still anxious to gain jobs at Amazon in these very locations. I suspect the picture is not quite what Sanders makes it out to be at Amazon but, the intentions around his bill seem sound at least in the notion that this is a problem that should be fixed — people should be able to earn a wage… Read more »
3
|
0
-   Share

I think the attacks are a little different in that Sam Walton arose from a small town background and Walmart, at least initially reflected (and to some extent still does) rural sensibilities. Bezos and Amazon — which are to a large extent inseparable in people’s minds — represent everything (both good and bad) about the new digital age. In short, I think there is a lot of personal animosity involved in attacks on Amazon that was not present with Walmart.

But ultimately, of course, they’re both big businesses, so they’re likely to face similar complaints of disruption, monopoly or just “too much power.”

Braintrust
"Amazon should manage political heat through statements of facts about the company."

"Let’s face it, Bezos’ ambitions go well beyond Walmart and any other retailer. Is Amazon really even a retailer? "

"Rule #1 of propaganda warfare is do not respond to negative propaganda — you never win."