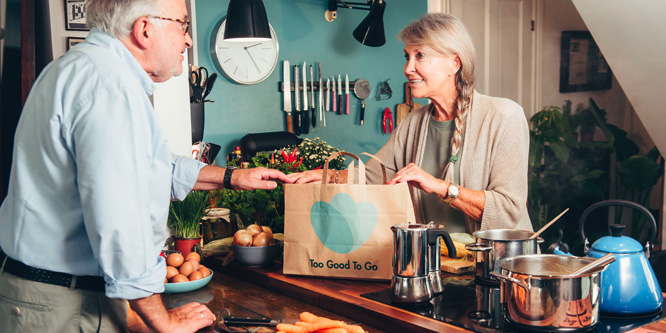 Cash-strapped customers are looking for new ways to cut grocery costs as food inflation continues to threaten household budgets. Families have begun turning to apps that let them circumvent paying full price by pointing them right to the food that is nearing its sell-by date.

A report from Next City discusses an emerging trend of families reaching for grocery apps like Flashfood, Too Good to Go, Food For All, Karma and Olio, which allow users to purchase food from nearby restaurants or grocers that is on the way to being thrown out.

Flashfood CEO Josh Domingues confirmed that the app, which boasts more than 700,000 active users, has experienced a big bump in growth due to inflation. Since 2022 the expanded user base has also exhibited new habits. Users are making longer trips to get discounted food from grocers, and they are visiting multiple locations for discounted groceries in a single day.

Too Good To Go, which works with restaurants and cafes, has facilitated the purchase of 1.3 million meals nearing sell-by dates in the last seven months, the same number of meals sold through the app over the previous two years.

Grocers were beginning to explore partnerships with food waste apps because of their environmental missions even before inflation made more consumers take a second look at their grocery bills.

Meijer in May reported that its partnership with Flashfood had diverted more than one million pounds of food that would otherwise have been thrown out. The grocer began expanding the use of Flashfood across its full footprint in 2021 after a successful 2019 pilot program. The pilot showed a 10 percent reduction in food waste for the test stores.

But with inflation raging, there is no doubt that customers are looking for a discount as much as a way to reduce food waste. In April, research showed hard discount grocers like Aldi and Lidl picking up steam in the U.S., which a Bloomberg article anticipated could pose a threat to incumbents like Walmart and Target as inflation pushed customers to further cut costs.

DISCUSSION QUESTIONS: How do you see the increasing popularity of food waste apps affecting the grocery and foodservice industries? Should all grocers partner with food waste apps or are there downsides to making discounted groceries easier to find?

Please practice The RetailWire Golden Rule when submitting your comments.
Braintrust
"We’re all experiencing sticker shock at the grocery store, so these apps can make a real difference."

"Every ounce of food saved from oblivion is a win. I just hope that food banks and charities aren’t pushed out of the mix."

"This is a terrific partnership between foodservice and grocery with these respective apps. This makes food waste unnecessary and unwanted."

This is a win-win solution. It help save food waste, can increase traffic to participating stores, and acts as coupons to help sell items about to expire.

Nothing should go to waste, and food waste apps offer a smart alternative. With inflation, grocers are struggling to move all inventory before it goes bad. Same thing for restaurants. Every ounce of food saved from oblivion is a win. I just hope that food banks and charities aren’t pushed out of the mix.

Also, labeling these applications as “food waste apps” puts a negative connotation on the product the consumer is buying. Remember when pre-owned vehicles were called “used cars”? Let’s hope for a better term, although “Imperfect Foods” is already taken. By law, everything sold by these apps is a clean, consumable product with minor cosmetic damages or approaching its sell-by date.

Business apps that can reduce waste and deliver cost savings to consumers are a total home run. We’re all experiencing sticker shock at the grocery store, so these apps can make a real difference. The value proposition is clear, compelling and timely. Love to see this!

This is a terrific partnership between foodservice and grocery with these respective apps. This makes food waste unnecessary and unwanted. Besides food waste reduction, there are some serious food savings to be found in the process. I am often reminded that when it comes to food purchases (restaurant or supermarket) “some people need to save money but everyone likes to save money.” Now here’s another solution to fulfill that desire.

I hadn’t heard of these apps before, I think they’re great! If it’s eatable and salable nothing should go to waste.

That being said, when inflation ceases to be the issue it is today I expect many of the current users will go back to saying no to items such as fruits and vegetables that don’t have the beautiful appearance they were used to. Or items for which they realize the best-by date is getting close.

Food waste apps are a positive addition to the grocery and restaurant takeout economy because they take care of a problem that is too low priority for businesses to do themselves. So long as each of these apps make it basically thoughtless for a grocer to participate, I do not see downsides. Even as the apps grow in popularity, there will remain a population of people that do not have the need or to whom this concept and process does not appeal. Keep in mind that the apps have convenience obstacles — like that they do not deliver and consumers do not get choice from a full menu/shop — that will, at best, position food waste apps as a part of the grocery shopping and order takeout rotation.

Braintrust
"We’re all experiencing sticker shock at the grocery store, so these apps can make a real difference."

"Every ounce of food saved from oblivion is a win. I just hope that food banks and charities aren’t pushed out of the mix."

"This is a terrific partnership between foodservice and grocery with these respective apps. This makes food waste unnecessary and unwanted."