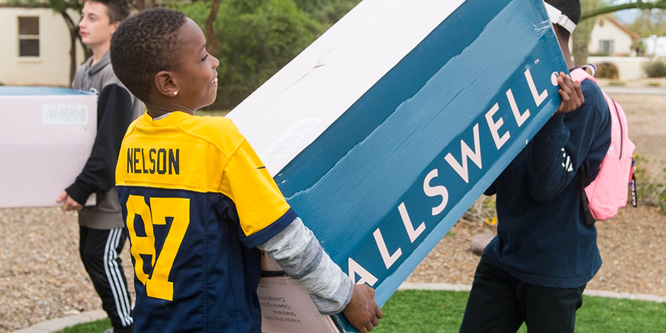 Walmart is evolving and reinventing itself and, as Andy Dunn, senior vice president of digital consumer brands at Walmart and founder of Bonobos, discussed in his session at IRCE 2019, there’s a good reason behind the shifts toward competing in new markets and online.

“Internet-driven retail doesn’t really work without brick-and-mortar,” Mr. Dunn said. “The math doesn’t work. We look at the last 20-plus years; since the IPO of Amazon there’s really only been one or two other companies that have gotten out to become let’s say $5 billion public companies in retail, because internet-driven retail doesn’t really make money.”

In an interview with RetailWire, Mr. Dunn explored the challenges of introducing Walmart to an urban, e-commerce savvy customer base while also making its new brands aimed at that audience work for traditional Walmart customers.

“The thing that’s really cool about Walmart is that the customer mix is reflective of the country because we’re the nation’s leading grocer,” Mr. Dunn said. “You’ve got all kinds of folks that are coming through, so I feel like our job is to develop direct to consumer brands that are purpose-driven that serve the widest possible group that we can. … What that will mean in some cases is the product is more premium for what’s typically on the Walmart floor but more in reach for the vast majority of our customers.”

As illustration, Mr. Dunn pointed to the evolution of the Allswell mattress brand and spoke of Walmart’s learning curve for digital brands. The brand’s initial launch on a standalone website, and its subsequent cross-sale on Walmart.com, were met with little enthusiasm and few sales. The team dropped the price from the $500 to $700 range to the $300 range, which caused the product to quickly sell out.

“That was that moment when it clicked for us,” Mr. Dunn said. “Our job isn’t just to replicate what’s happening with existing direct-to-consumer brands but to reinvent it with a huge swath of the core Walmart customer in mind.”

Walmart is also piloting the sale of Allswell mattress toppers in some brick-and-mortar test locations, a step in feeling out how brands built for D2C can perform with a presence on the store shelf.

“When we came in we didn’t realize that the opportunity to use the overall Walmart ecosystem to build these brands in a better way was what we were coming in to do,” Mr. Dunn said. “We thought we were coming in to keep doing things the way we were doing them at Bonobos, and the realization from Allswell has been that there’s actually a much bigger opportunity if we do it omni.”

DISCUSSION QUESTIONS: Is the D2C strategy Mr. Dunn and others at Walmart are developing to meet the needs of both urban and traditional Walmart customers the path to success? Will the public perception of Walmart 10 years from now be different than it is today?

Please practice The RetailWire Golden Rule when submitting your comments.
Braintrust
"This sounds to me like a great story about testing, probing, listening, learning and adapting."

"What ultimately will come out of this will be renewed interest in the Walmart brand, along with new customers..."

"I fundamentally reject the premise that online-only retail cannot work."

13 Comments on "Are D2C brands reinventing Walmart or vice-versa?"

Mr. Dunn is spot on, especially when he said, “Internet-driven retail doesn’t really work without brick-and-mortar.” Walmart has consistently been a retailer who follows that rule, and it is working.

As we continue to move forward in the never-ending world of technology, more opportunities for shopping and convenience will evolve, and I am confident Walmart will be there adapting and staying one step ahead of what the customer wants.

So they cut the price of the mattress in half and it’s sold out and that means their “strategy” is successful? In what kind of crazy town are we talking about this as an example of success?

The kind of town where the margin on mattresses is close to 70%. They can afford this, and if it brings new customers into their world, more power to them.

Bob, Paula, I think you’re both right. The insane margins on mattress products are what allow Walmart to absorb such a steep price cut. But to Bob’s point, all Walmart proved with this exercise is that you can sell cheap mattresses to a large audience. That doesn’t equate to the Allswell digital brand becoming a successful brand. Successful in terms of net sales, sure. Successful in terms of brand development, I don’t think so.

This strategy is nothing new.

Having started my career as a mattress buyer for Macy’s, there is such a significant cushion built into the margins that Walmart could clearly afford to make such a price reduction. Perception is everything, and mattresses marked down so low, have always been a so-called loss leader to drive traffic to the stores.

Exactly. Nothing new, so why tout it as a new strategy is my point. And if there was that much margin in their mattresses, then it sounds to me that they went against their whole idea of lowest prices always.

I fundamentally reject the premise that online-only retail cannot work. I agree that there is a limit to how big companies can get without stores, but we all ought to appreciate that a healthy retail economy includes healthy small to medium sized players going after targeted niches as well as large players going after the mass market.

One of Walmart’s biggest opportunities is to capture a larger share of higher-income shoppers, many of whom have traditionally shunned the retailer either entirely or just for general merchandise. The introduction of new brands, often via acquisition, has widened out Walmart’s customer base. The improvements made to the website and its delivery options have helped increase appeal, and store refurbishments are also gradually changing perceptions.

The future Walmart still has core attributes of low price and convenience, but without so many of the negative connotations that have traditionally come attached.

This sounds to me like a great story about testing, probing, listening, learning and adapting. Walmart is exploring the market with a wide range of initiatives and learning an enormous amount on every front. Yes, absolutely they will be a very different company in 10 years. They are a great lesson in managed evolution.

Utilizing the store presence Walmart has gives it a tremendous advantage over Amazon and other retailers. It is no wonder that Walmart discovered that omnichannel selling works to their advantage. Retailers need to always listen to their customers, and Walmart has discovered this lesson again from its Allswell experience.

The consumer perception of Walmart will change over time as the retail market evolves which it will. Walmart will expand its product selection into more high-end products slowly and change the perception that it is only a low-priced retailer.

Walmart is an extremely well established business, with their ubiquitous brick and mortar stores leading the way. With their recent acquisitions of Jet.com, Bonobos and others, the big box leader has built an impressive portfolio of digital native DTC brands. If anything, the Walmart team is evolving and adapting to the new customer mindset, and their digital transformation is key to their continued success and relevancy.

The public perception is changing, yet the core Walmart customer base will remain the same. What ultimately will come out of this will be renewed interest in the Walmart brand, along with new customers, who are already fans of Bonobos etc. It’s key for Walmart to capitalize on driving more business with these new customers with their subscription services, free shipping, etc from their core shopping platform.

Walmart is looking for ways to fuel overall growth. They’ve hit a plateau with their traditional customer and need to expand to other customer bases, especially higher-income shoppers in more urban areas. To those shoppers, the Walmart brand means something — just not something they want to enter into a brand relationship with and buy from. Walmart acquired brands like Bonobos to appeal to that customer segment.

The tricky part Walmart needs to answer is — do they need to transform those brands to something that appeals to their existing base, or simply allow those brands to develop their new, expanded base exclusively. It’s a brand evolution question and Walmart is clearly experimenting to see what will work. They don’t need to ensure a broad appeal to every customer — it’s ok to appeal to each customer segment in a different way as long as each segment values the brand relationship.

Will the public perception of Walmart change in 10 years? Yes, if they want to grow revenues!

This may serve to change (improve) the public perception. I have reservations, however, about how it will impact the public perception of the D2C brands who partner with retailers like Walmart. D2C brands succeed by being obsessed with data and controlling every interaction to deliver an exceptional customer experience. If the physical experience of the brand doesn’t match the digital one, the brand will no longer have an edge on any other traditional brand. Brand-owned D2C stores are deeply integrated with the brand’s digital presence and are (almost as) data-centric. What happens to brand identity when these brands turn over control to large retail partners?

Braintrust
"This sounds to me like a great story about testing, probing, listening, learning and adapting."

"What ultimately will come out of this will be renewed interest in the Walmart brand, along with new customers..."

"I fundamentally reject the premise that online-only retail cannot work."