A new survey from BrightLocal shows online customer reviews are highly relevant to restaurants, but seem less so for other consumer businesses, including stores.

Asked which types of businesses they’ve read online reviews for, 60 percent of respondents indicated restaurants/cafes. Coming in second was hotel/B&B at 40 percent. Both business types appear to be getting a boost from the popularity of Yelp and TripAdvisor.

In the traditional retail space, 31 percent indicated they’ve read online reviews for clothing stores while 28 percent have read them for grocery stores. Medical/health care professionals and automotive services were also close to 30 percent. Near the bottom of the list were services such as pest control, builder/roofer, accountants and locksmith.

BrightLocal, a search engine optimization specialist, noted that the business types that consumers use more frequently naturally see more reviews and they’re read more often by consumers. But even for services not used as often, the ultimate purchasing decision can be strongly influenced by reviews. 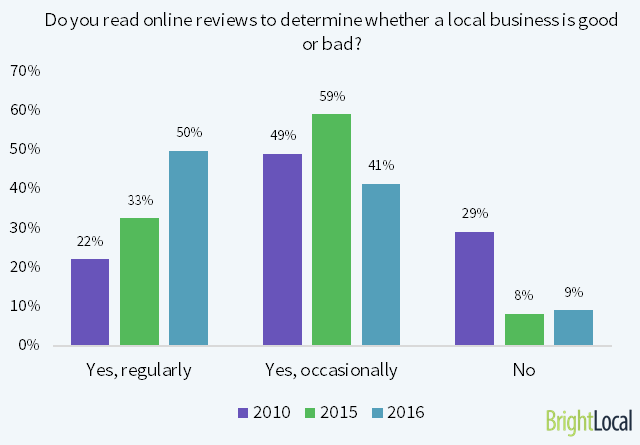 The overall survey of 1,062 consumers done in September showed online reviews growing in popularity overall. Among the findings:

Please practice The RetailWire Golden Rule when submitting your comments.
Braintrust
"To not acknowledge the power and potential fallout of reviews is to not acknowledge that consumer experiences and interests are most important."

"...consumers are learning to have their lie detectors fine tuned in the knowledge that some reviews have less credibility. "

"It is possible that third-party review sites hold less sway for other businesses, like those selling products."

9 Comments on "Are favorable online reviews critical for retailers?"

Traditional retailer reviews don’t matter a bit. What is of value to the shopper? This is not a restaurant with a set menu and the experience as a prime mover. Having someone’s size or particular taste in clothing or accessories is not a transferable value.

Because we have all had experiences with an unpleasant sales rep at even our favorite retailer we are willing to forgive even that criticism. Online is a different beast. Return policy, accuracy of order and speed of delivery are all measurable. These are not metrics that traditional retail salutes.

I agree with the study findings, but when Amazon is a competitor nothing can be taken for granted. Sure, reviews of service-type businesses are definitely more relevant to consumers in the moment, such as planning a dinner for later with friends. But when shoppers are concerned about delivery or return hassles at retailers, merchant reviews are very relevant. To not acknowledge the power and potential fallout of reviews is to not acknowledge that consumer experiences and interests are most important. The web’s biggest retailer has built a solid reputation and goodwill on consumer delight, so how is dismissing the importance of merchant reviews a good strategy for brick-and-mortar retailers or m-/e-commerce sellers?

In a recent national study we did with over 2000 people, peer reviews were more important to young people than touching and feeling product. To us, that says it all. Despite that information being readily available from us and others, it’s astounding how slow traditional retailers have been at bringing reviews in-store. You may have noticed that Amazon has them front and center in their book store. Yep, they know too and they did something about it.

Customers are more interested in word-of-mouth than online reviews for brick-and-mortar stores, but many will still check online reviews of a particular brand or item before purchasing. Since branding isn’t as important to Millennials, and since brand names can be bought and slapped on lesser merchandise in today’s market, customers are more interested in reviews on quality. Even in-store, it can be hard to tell if a product is built to last.

We have a 4.7 rating on our Facebook reviews and a response time in the high 80s for responding quickly to comments or questions, which I’m happy with. Does it matter? I hope so, as no retailer would like a one-star average and to me word of mouth still matters the most, as it brings in the customers who want to spend some serious money in my store.

I also read restaurant reviews and hotel reviews (more than reviews of the other places I go) but if you are going to be on social media, it is important to be viewed in a good light. You never know when that next potential loyal shopper may be looking at your ratings.

All customer reviews serve the purpose of eliminating doubt or uncertainty — but they have to be considered and discussed in two different contexts in order for the discussion to be useful.

In our experience economy, in which information is powerful, all reviews matter. At the same time, consumers are learning to have their lie detectors fine tuned in the knowledge that some reviews have less credibility. Consumers want more specifics related to the good or bad experience and will gauge their importance to their spend.

It is possible that third-party review sites hold less sway for other businesses, like those selling products. We do know that reviews at the point of purchase are very impactful. Independent research by Forrester has shown that reviews are critically important. A recent report said that “consumers will consider a purchase only if ratings and reviews are present for products they are seeking (67%) and on the sellers they are buying from (45%).” At the end of the day, consumers still put a lot of faith in what other consumers have to say.

As with any metric of public image, a business should be concerned about online reviews, but should not obsess over them. There will always be cranks, and while a response to a clear falsehood should be made, getting into an online sparring match is ill-advised. The same thinking can be applied in reading them for feedback — both positive and negative: look for clear patterns, rather than fixating on outliers.

"...consumers are learning to have their lie detectors fine tuned in the knowledge that some reviews have less credibility. "

"It is possible that third-party review sites hold less sway for other businesses, like those selling products."