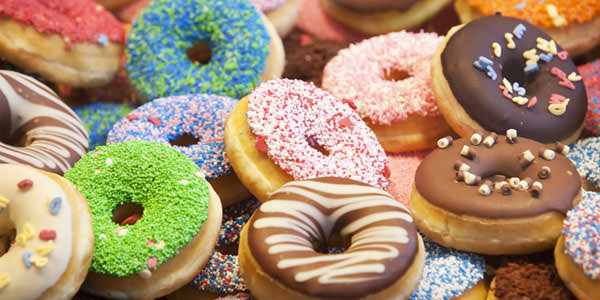 Among those participating, Krispy Kreme gave away one free doughnut with no strings attached. Both Dunkin’ Donuts and Tim Hortons offered a freebie with the purchase of a beverage. Wawa offered one with purchase to its loyalty card members.

Another popular freebie event is “National Coffee Day,” which occurs annually on September 29. Last year, 7-Eleven offered a free medium-coffee from 7:00 a.m. to 11:00 a.m. Krispy Kreme upped the ante by offering a free coffee and glazed doughnut. Preserving some margin, Dunkin’ Donuts, celebrating its 66th year, offered medium cups of coffee for 66 cents. Starbucks donated a coffee tree for every cup of brewed Mexico Chiapas coffee it sold in the U.S. and Mexico.

Ice cream, pizza, cookies and beer are also among categories celebrated with special promotions on the annual days.

On a more niche level is “Free Comic Book Day,” which celebrated its sixteenth year on May 6. Over 5.7 million comics were expected to be given away this year, according to Diamond Comics Distributors. Unlike other “National Days,” the vendors – comics publishers – supply the comic books and graphic novels at a nominal cost. Not so surprisingly, a survey of comic book shop owners by Diamond Comics showed that 92 percent were either “extremely positive” or “positive” about 2017’s “Free Comic Book Day.”

However, as detailed by www.bleedingcool.com, the survey found the percentage of those who were “extremely positive” was slightly lower than its 2016 survey. Although the question was worded differently, the comic book stores surveyed also felt they saw less new customers than the prior year. Concluded Rich Johnston, founder of bleedingcool.com, “Might we expect some changes next year?”

DISCUSSION QUESTIONS: Do you see annual free product days as a proven marketing tool to reach new and existing customers or are they largely ineffective in achieving those goals? How should retailers best approach such days?

Please practice The RetailWire Golden Rule when submitting your comments.
Braintrust
"Yes, national days are absolutely an effective marketing strategy as long as they have significant social media traction."

"Probably more of a reward for being a prior customer than attracting someone new, but that’s not always a bad thing..."

"The whole purpose of the “free” offer is to allow a potential customer to try the product, hopefully, like it..."

11 Comments on "Are ‘free’ product days worth retailers’ efforts?"

Probably more of a reward for being a prior customer than attracting someone new, but that’s not always a bad thing, especially if it’s just once a year. And if you give away a doughnut, for example, and get someone to buy an extra one and a cup of coffee, that’s not too bad.

National days are a good way for a market segment to remind consumers why they like certain products, while creating publicity around brands. They may not be the most cost effective means to achieve additional sales, but they do garner a lot of publicity and word of mouth, and in an era of social commentary, that can be important and ultimately financially rewarding.

The whole purpose of the “free” offer is to allow a potential customer to try the product, hopefully, like it, and then return on their own for more purchases. These can be effective if promoted properly and most importantly, “wow” the customer when they take advantage of the offer.

I’ve been in businesses that give away the “free” item, and unfortunately, the employee makes no attempt to engage and impress the customer. And other times, I have been thoroughly pleased almost to the point of feeling guilty taking the free item because the presentation was fantastic. When that happens, I usually purchase an additional item or items.

In today’s world where there is so much competition when doing “free” giveaways, make sure you get the most out of it and turn the “free” item you’ve given away into future sales so that the investment makes sense.

Yes, national days are absolutely an effective marketing strategy as long as they have significant social media traction. In my opinion, Dunkin’ Donuts was very successful with their national donut day promotion. Many people took advantage of the Dunkin’s offer. I know this because my friends posted their donuts on Instagram, Facebook, and Snapchat. I couldn’t find time to participate in the promotion, and the FOMO was real.

Dunkin’ also did a great job of offering a deal that was both attractive to customers, yet not horrible on their margins. Free donut with a medium beverage? I bet they sold more coffee than usual that day, which makes up for the free donuts.

I agree with Stephen that they are more of a reward for existing customers than securing trial of new customers. That being said, occasionally rewarding customers isn’t a bad thing.

Once customers are in a store for their freebie on National Doughnut Day, selling them a coffee or an extra doughnut shouldn’t be that hard.

I agree with Meaghan in terms of the social media reach of these new “holidays.” Many consumers find out about them via a trending topic on Twitter, Facebook, or Snapchat.

Retailers who have planned ahead and gotten together the perfect combination of offers and marketing campaigns behind them will be the first to pop up. When consumers see social proof from their friends and influencers paying these retailers a visit, they’ll be much more likely to go in as well. A lot of these holidays are new, so planning and experimenting to find the best offer is still the best bet for participating retailers.

Annual national days are still a great marketing tool, but only with ample press and interaction with customers. Retailers need to gain traction on all their social media platforms which requires a lot of planning. At the actual event, retailers need to act as brand ambassadors rather than just vehicles to hand out free items. They should make a real connection with the customers to make a lasting impression. These events largely cater to existing customers and are more of a way to reward them for their loyalty which is never a bad thing. And retailers usually sell more of their other items to accompany the free product on these days. But to garner interest from new customers, there needs to be some kind of unique hook beyond free items to capture sales.

These annual free product days are more important than before. Client expectations grow each year, and to meet them retailers are required to participate.

Such an event serves multiple purposes at once: it attracts new customers, rewards existing ones, fosters loyalty, creates the opportunity for an ad campaign, puts clients in the center, increases brand awareness and creates that positive vibe.

The key is to do cross-sell/upsell when you give away the free product to maximize your return, otherwise it becomes just an awareness exercise which isn’t that bad…. It is also good for social media, the #tag for Nationaldonutday is amusing to follow too.

I would agree that these days are probably more likely to be frequented by existing customers than attract hordes of new ones. That’s not necessarily a bad thing. A free coffee from a store you frequent regularly is almost like a loyalty reward. You may also be tempted to buy something else while there. Free product days give customers a reason to go into a space, it’s then up to retailers to maximise that opportunity to either get them to come back (and become a regular customer) or to buy something else while there. Or ideally both!

Hello Tom! I have a couple of comments related to your discussion of “free” events, particularly Free Comic Book Day. I am the founder of Free Comic Book Day. The event reaches into more than 60 countries, has an attendance north of one million people each year, so I’d think you’d have some hesitation in calling FCBD “niche.” While the overall retail economy has been struggling, the comics market hasn’t been immune from that. Seeing the results of the survey, with 92% of participating retailers giving FCBD a strong vote of confidence, it’s safe to say FCBD is on strong footing heading into its 17th year. As you’ll likely agree, it’s quite remarkable to keep any sales promotion thriving for that long. I’d also like to kindly suggest that if you have any questions about FCBD, perhaps a gossip site isn’t the smartest place to get your info. The pros at Diamond Comic Distributors, coordinators of Free Comic Book Day, are easy to reach. So am I. Best! Joe Field Flying Colors Comics Concord CA… Read more »
0
|
0
-   Share

Braintrust
"Yes, national days are absolutely an effective marketing strategy as long as they have significant social media traction."

"Probably more of a reward for being a prior customer than attracting someone new, but that’s not always a bad thing..."

"The whole purpose of the “free” offer is to allow a potential customer to try the product, hopefully, like it..."