Are holiday shoppers getting more ‘appy’? 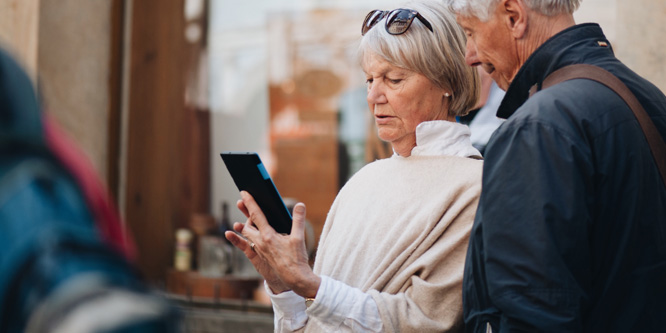 The bulk of holiday shoppers during the first part of this holiday season were not Millennials or Gen Zers, but they still used their smartphones to shop — and some even preferred individual retailer apps.

Those are a couple of major takeaways from AdColony’s “Holiday Shopping Survey 2018.” The survey of several hundred consumers indicated that a full 70 percent of 2018 holiday shoppers were between 45 and 70.  Fifty-nine percent reported using their mobile phone for shopping more than their desktop computer, and 35 percent prefer to shop via mobile app.

The findings further indicated that 66 percent of respondents would purchase something directly from a mobile advertisement.

Surveys have begun to indicate that customers as a whole are using individual retailer apps more frequently. Such factors as better smartphone technology, more thoughtful app design and better store/app integration may all be playing a role in driving adoption. And older audiences aren’t excluded from that trend. Walgreens, for example, has developed an app that directly addresses the unique UI needs of older customers.

The study’s insights on holiday shopper age may or may not speak to a year-round trend.

While there has been a lot of talk over the years about the importance of retailers courting younger customers, the fact that the majority of 2018 holiday shoppers come from an older cohort could point to a need to cater to that audience year-round.

And yet, it may also indicate that much of the gift-giving during the holidays is being done by parents and grandparents.

DISCUSSION QUESTIONS: Does research showing a greater percentage of holiday mobile shopping by older customers indicate the need for retailers to shift their emphasis during the other 10 months of the year?  Do you think favorable attitudes toward in-app shopping will lead more retailers to concentrate on developing and improving their own apps?

Please practice The RetailWire Golden Rule when submitting your comments.
Braintrust
"Getting the mobile experience right year-round (from app design to BOPIS execution and everything else) will pay dividends during the 4th quarter."

"Habits that are picked up during holiday will carry over to the rest of the year and we’ll see mobile shopping continue to grow in 2019."

"Unfortunately, retailers will remain behind the curve, still thinking “we gotta get people into the store.”"

12 Comments on "Are holiday shoppers getting more ‘appy’?"

The entire world is becoming more “‘appy” but this is even more the case in retailing. The importance of mobile has and will continue to become an ever larger part of our lives and smart retailers are prioritizing their investments accordingly. Like any software development, once released, these apps need to continue to evolve -– mobile app development is a continuous journey every retailer should take very seriously.

Here’s a link to a new AP article on the same topic:

There’s no question that the smartphone has become an essential shopping tool — not only for m-commerce but for brick-and-mortar shopping. Stores that want true omnichannel experiences for their consumers absolutely need to view this as a 12-month opportunity, not just isolated to the holiday season. Getting the mobile experience right year-round (from app design to BOPIS execution and everything else) will pay dividends during the 4th quarter.

The mobile phone, for every reason other than the actual phone, is a powerful place to connect with your customers. They will use the phone to gain more product knowledge, read reviews, compare pricing and more. The retailer that has its own app is just making it easier on the customer – and customers will appreciate that. To not have an app is old-school. Keep up or play catch up.

There is certainly value in app development for retailers or at least making sure their shopping experiences are conducive to app use among consumers. Smartphones and mobile technology are incredibly mainstream now, and the blending of tech and retail will continue. As a result, retailers that are innovating with apps have some solid growth potential.

I have not yet become mobile evolved. Though every bit of my now completed Christmas shopping was done online.

But in China, it seems all buying is done with mobile phones (as is everything else). When I need something, I just ask a student and they order it right there. Pretty cool.

The mobile experience is just continuing trend to convenience and online shopping. Unfortunately, retailers will remain behind the curve, still thinking “we gotta get people into the store.”

Kohl’s said that 80% of its online traffic came from mobile devices, although a lot of the resulting sales may have happened in-store. So the migration to the Chinese shopping model may be happening faster than we realize!

Retailers not paying attention to mobile are definitely missing out. Customers of all ages are continuing to turn to mobile devices to browse and shop. Habits that are picked up during holiday will carry over to the rest of the year and we’ll see mobile shopping continue to grow in 2019, especially in Q4. Investment in mobile apps is a must to stay relevant and retailers need to know their customer demographic and design apps that are intuitive and easy to use.

We are living in a world where everyone is connected 24/7, so getting the digital commerce experience right and optimized is beyond critical for retailers and brands. With this continuous connectivity, retailers and brands have a unique opportunity to connect with consumers beyond the actual transaction and products. Digital is the connective tissue that enables relationships to be built that span across not only the apps, but the commerce- and influencer-dominated landscape that is Instagram.

Yet we all must acknowledge the statistics that more than 90 percent of sales still occur in the store. While we should expect some slight incremental increases, as folks become more comfortable with mobile commerce, the store has and will remain the place to connect, engage, entertain, and drive meaningful relationships with customers.

Quite simply as apps become more intuitive, more people of all ages will use them. Simple thought — just not easy to execute, evidently.

Convenience-conscious shoppers of all types will use mobile apps if they are readily available and easy to use.

According to findings from an Incisiv study, sponsored by BRP and Windstream, 75% of consumers use digital sources to research products before they enter a store and nearly 50% use a mobile device while they are in the store. Mobile devices are becoming a ubiquitous part of the shopping experience. Mobile apps have matured in recent years and now they have become more user friendly that mobile/responsive websites. However, the big challenge for retailers is to make their app compelling for consumers to download and use.

Consumers will usually only download an app if they think they will use it frequently or if it offers a compelling benefit: access to loyalty program, special promotions and discounts, way-finding tools, etc. Consumers will only keep so many apps on their phone and if they don’t use the app frequently, there is a good chance they will eventually remove it. There is constant pressure for retailers to keep their apps fresh and valuable.

This really speaks to how retailers always need to understand who their customers are and what their needs are. Mobile apps are just another channel to the retailer, but to the customer, it’s another window into the brand that they expect will give them the information and experience they want whether or not they come into the store at some later time. Retailers that pay attention to this throughout the year will certainly experience more uplift during the holiday season!

Braintrust
"Getting the mobile experience right year-round (from app design to BOPIS execution and everything else) will pay dividends during the 4th quarter."

"Habits that are picked up during holiday will carry over to the rest of the year and we’ll see mobile shopping continue to grow in 2019."

"Unfortunately, retailers will remain behind the curve, still thinking “we gotta get people into the store.”"