At Amazon Books, only Prime members get the best price 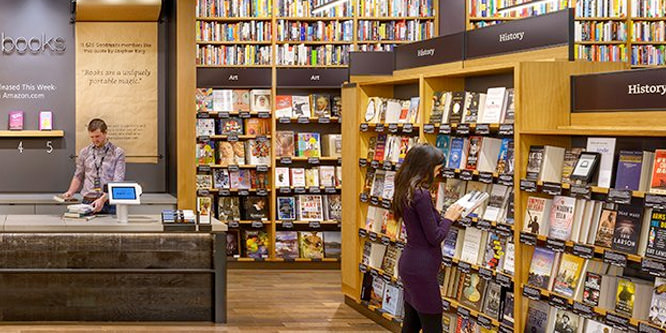 Amazon Prime members are used to getting a slew of perks and discounts not available to Amazon users who don’t pay for the service. But the benefits of Prime membership have now been extended beyond the website to Amazon’s first brick-and-mortar venture.

Prime members shopping at Amazon Books, the e-tailer’s physical bookstore, will pay the same price that they would online while non-members will pay list price, according to GeekWire. This is a change from how things have been in the year since Amazon Books’ inception, when all customers shopping in-store got their books for the same price as on Amazon.com. All customers will still pay the online price on the in-store purchase of Amazon’s devices that are available in Amazon Books.

Whether customers will read this move as a bonus for Prime members, an incentive to join or punishment for those who don’t remains to be seen.

The in-store experience of the Seattle location has polled well with market researchers and some Yelp reviewers. However, it is worth noting that Yelp reviewers cited having the same low-prices in-store as on Amazon.com as a big plus for the brick-and-mortar location, as reported in RetailWire. Reviewers were also frustrated with the lack of prices appearing on books in-store.

Amazon has been making other inroads into physical retail. In September, the retailer began opening pop-up stores throughout the country to sell its devices, allowing customers to demo products with experts available in-store to help. The pop-up initiative is being handled by a different Amazon team than Amazon Books.

The company also reportedly has other standalone category stores in the offing. Amazon is working on a drive-up grocery store, and there is speculation that they are planning a convenience store format.

There is no word if Amazon is considering using the Prime brick-and-mortar pricing structure in other physical retail concepts.

DISCUSSION QUESTIONS: How will Prime and non-Prime customers react to the variable pricing structure at Amazon Books? Do you see this pricing strategy as a good way to promote Prime? Does it have implications for other retailers’ loyalty programs?

Please practice The RetailWire Golden Rule when submitting your comments.
Braintrust
"It will be an interesting experiment to see if the price difference is enough to incent people to join Prime if they aren’t already members."

"My sense is that this will serve to bring more Prime members into the fold and that there will be limited customer frustration."

"It is pretty obvious … Prime members will be happy that they get another valuable perk from Amazon Prime and non-Prime customers will not be happy."

15 Comments on "At Amazon Books, only Prime members get the best price"

Non-Prime customers won’t like it but, as American Express used to say, membership has its privileges. Personally, I don’t like the concept of charging more once consumers are in the store. I’d rather Prime be a requirement to enter the store, a la Costco.

One could argue that Prime members deserve a price break due to having paid their membership. One could also argue that there are many other types of loyalty programs that reward best customers with discounts. Hy-Vee even gives discounts on gasoline based upon membership purchases for groceries and other goods. So why should variable pricing on books for Prime members be any more disruptive?

One thing you can be sure of … Amazon will test and measure both the reaction and results to the Nth degree. Expect to see a lot more variable pricing models as new formats roll out.

Other than the fact that they started out offering the same prices to everyone and now have changed the policy, I feel like this is a non-event. Grocery stores offer club pricing to their members and have for years and years. If Amazon wants to operate that way, they are welcome to give it a go. What I don’t fully understand, though, is that non-Prime members can still get the low prices online, right? Just not with two-day shipping? So Amazon is putting into place a strategy that it explicitly took advantage of at other brick-and-mortar retailers — the online price is lower, so why would I buy it in a store? It will be an interesting experiment to see if the price difference is enough to incent people to join Prime if they aren’t already members — is the value of having it right now at the best price worth $99 per year? Or will consumers just add to cart on their phones and go home instead of joining Prime and buying it in… Read more »
7
|
0
-   Share

You know that Barnes&Noble does exactly the same thing, right? How is this any different?

For one thing, it’s undoubtedly an excellent way to get more Prime members. But on the whole, I think you’ll see a lot more of this “intelligent” method of pricing. Basically, like the airline model, the prices will vary by demand, market, loyalty and the occasional special. Due to the predominance of a factor we call “Big Data,” it’s the future of pricing and of retail in general. And like the airlines (and Prime), the more you opt in, the more benefits you’ll get. Of course, when you don’t fly on your prime carrier (pun intended), it’s awful! As consumers, we need to get used to this new method of consuming; you scratch my back …

Shoppers are accustomed to seeing discounts for members of a retailer’s loyalty program, so they won’t be alienated by the differentiated pricing at the Amazon physical stores. Most of the shoppers in these stores are likely Amazon fans anyway, and are therefore already members or prospective members of Amazon Prime.

It will be interesting to see if the discounted pricing continues for Amazon devices like the Echo, which serve to extend Amazon’s influence by giving consumers easier ways to order its products.

I just visited the LaJolla UTC Amazon store! The pricing structure (and purpose) of the store was confusing to shoppers. They kept the sales associate busy with lots of questions — it was clear to me that they did not understand the concept: bookstore, showroom or promotion for Amazon’s devices, app and online programs?

Prime is the lifeblood for Amazon. Anything they can do to make Prime membership more appealing just expands their strength in all categories they are participating in now and those in the future that we haven’t even thought of yet.

It is becoming increasingly clear that Prime is at the core of everything that Amazon does, and it seems the bookstores are no exception. My sense is that this will serve to bring more Prime members into the fold and that there will be limited customer frustration. After all, we’ve become accustomed to the fact that we’ve got to join our grocery and drugstore loyalty programs to get promotional prices, so there is clear precedent.

First, this isn’t a new tactic. Many retailers give “members” a better price. Joining Prime for $99 may not be enough to get someone who buys a few books a year to join, but it is a good perk for the existing member.

One thing you can definitely say about Amazon — they do things full throttle. No half way, but all the way. I am a Prime member and was a member of Barnes & Noble. My wife and I were at B&N the other night looking for a book. She saw what she wanted and we found it on Prime for significantly less. Waiting an extra day to get it was not a problem. I have no problem paying for a membership at a site/store I frequent often enough to make it back and then see a savings, a la Costco, Amazon, etc.

Amazon has done a great job of continuing to add benefits to its Prime membership/loyalty program — that’s why they now have more than 60 million U.S. members. Variable pricing, and lower prices for member-only groups, is becoming more expected. For loyalty programs, providing special discounts provides a valuable benefit and incentive for consumers to join your program — even for a fee, if the benefits are significant.

This strategy is similar to the Barnes & Noble membership program, where customers must purchase the membership in exchange for discount percentages. I do not think this program will be a difficult sell and it will probably drive incremental memberships, albeit a small number given the limited footprint of their stores.

Once again Amazon is setting the agenda and turning Prime into a relentless juggernaut, taking on more members and market share. Only last week the BrainTrust was almost at consensus that you can’t charge higher prices in-store than online (in response to Dr Petersen’s article). Yet Amazon can do it because Prime offers a variety of different benefits — it is not just a loyalty card, it is becoming and will do so even more, a way of life. Brick and mortar retailers need a strategy to deal with Prime, not with Amazon.

No different than any rewards program giving discounts to members, in this case Amazon simply give a different price. In this case, Amazon is trying to see if it can operate a book store profitably and use it as one of the touch points for the Amazon Prime membership experience.

Braintrust
"It will be an interesting experiment to see if the price difference is enough to incent people to join Prime if they aren’t already members."

"My sense is that this will serve to bring more Prime members into the fold and that there will be limited customer frustration."

"It is pretty obvious … Prime members will be happy that they get another valuable perk from Amazon Prime and non-Prime customers will not be happy."