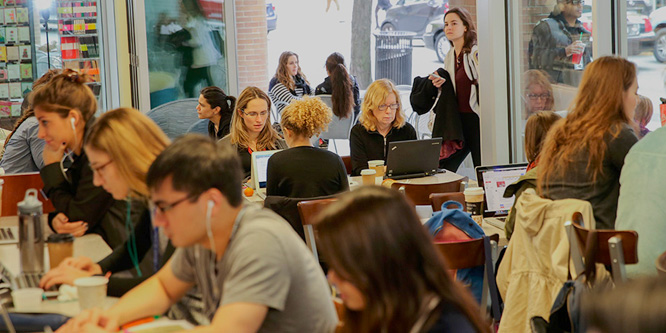 Barnes & Noble College (BNC) sees itself as more than a just a bookstore for the millions of students, educators and others it serves through its 777 campus locations, their respective e-commerce sites, as well as 714 virtual stores. The company has found that serving its core customers — students between the ages of 18 and 24 — requires different approaches than those that worked with the generation(s) that preceded them.

“We have found that what makes Gen Z uniquely different from previous generations is that they have a very strong sense of who they are as individuals, as well as their values and aspirations,” Lisa Malat, COO of BNC, told RetailWire. “As part of that, they feel a sense of responsibility to change the world and correct things they see that they don’t think are right. And this certainly translates to their behavior as a consumer. They want to associate with brands that reflect their own values and beliefs, and that allow them to express their individuality.”

BNC, which was spun off from Barnes & Noble in 2015, has used its own proprietary research platform to better understand the shopping expectations of younger consumers.

“The physical retail space is important to Gen Z, despite the fact that they’re a generation of digital natives,” said Ms. Malat. “While they do live online, social connection and the experience of going into a store and immersing themselves and engaging with a retailer in their own personal way is also critically important.”

BNC has made investments in curated merchandise, new brands and local events as it looks to create deeper connections with its customers. It has also developed concept shops within many of its stores that address different aspects of students’ lives, such as graduation, career success, mental health and wellness.

The shops, Ms. Malat said, address the needs of Gen Zers while providing the type of “experiential moments” they have come to expect from merchants.

“In our graduation concept shops, they can create Instagrammable moments of trying on their cap and gown and holding a diploma frame, saying, ‘Hey, Mom, look at me. This is four years from now,’” said Ms. Malat.

BNC is also informed about what works with Gen Z consumers through its own workforce. The company employs thousands of students as employees in its stores who make recommendations about relevant products based on local interest.

DISCUSSION QUESTIONS: Are Gen Z consumers harder to please than previous generations? What do you think are the keys to attracting and keeping Gen Z consumers as customers?

Please practice The RetailWire Golden Rule when submitting your comments.
Braintrust
"The Gen Z shopper is contributing to the popularity and growth of experiential retailing and sees offline, physical shopping as a destination."

If there ever was a need for knowing a very specific target segment, it would be in college book stores. The article indicates that BNC is doing the “right stuff.” The litmus test comes from the Gen Z workforce in BNC stores. Gen Z is not inherently harder to please if you make the time to understand their perspective and needs. They are just “different” as a segment. And in many ways, that makes it easier to differentiate their experience in-store.

Treating Gen Z with the utmost respect is the key to creating a bond that will carry over beyond their academic life. BNC has an opportunity to create tremendous LTV (Lifetime Value) with Gen Z customers. Students’ academic life is filled with books/audio/clothing and BNC is uniquely positioned to leverage this relationship forever. One of my clients, The Harvard Coop, which is the college bookstore for Harvard, the Harvard Business School, the Medical School and MIT has a bookstore relationship with BNC. This relationship coupled with the cooperative business model of the Coop allows for a very intimate relationship between the students, faculty, and BNC that lasts for a lifetime. A truly symbiotic relationship that works.

As the first generation that has grown up during a period of widespread use of everything digital, Gen Zs have limited patience online with slow websites or mobile apps. This impatience can spill over to brick-and-mortar retail. Ensuring that the omnichannel experience is first rate and efficient is important. Buying online and picking up in the store would be a must-have service as well as an easy return process.

I was recently in a college bookstore in San Diego and I was very impressed with their retail approach. They used many of the same tactics that BNC uses to successfully attract customers:

The Gen Z shopper is highly visual, hyper-connected and socially responsible. This is the first generation of shoppers that is digital first. Retailers need to invest in understanding their needs, as BNC is doing quite nicely. This is important, because the Gen Z shopper is contributing to the popularity and growth of experiential retailing and sees offline, physical shopping as a destination, an experience, and a place to connect, learn and indulge their particular interests. I think BNC is spot-on in their efforts.

Gen Z isn’t any more or less difficult to please than any other generation; they just have different expectations from what we’re accustomed to. I struggle with the whole concept of grouping millions of individuals into a category, such as Milennials or Gen Z. Doing so assigns characteristics that are based more on age and lifestage than on long-term psychographics.

Either way though, it’s up to retailers to understand what customers want, and not assume that they will want the same things, the same way, as their parents or even older siblings. Research and an open mind are critical, and ongoing study is necessary to stay in step with changes. What used to work won’t always work. And blaming the generation is the same as putting one’s head in the sand.

I am not sure I am in a position to determine what two of my grandchildren would prefer. But based on this article it appears Barnes & Noble are on the right track. The key might be to continue hiring their peers so the student customers feel comfortable going in and asking questions. They know their peers will give them good advice.

Gen Z isn’t harder to please than any other generation. Retailers need to really try to understand their customers, regardless of generation. I think where BNC has the edge is their workforce. By listening and empowering them on a local level, they can tap into the psyche of their very targeted customer.

So I feel compelled to note that when they were the age Gen Z is now, Baby Boomers had a, ” … very strong sense of who they are as individuals, as well as their values and aspirations.” Boomers also clearly felt they had, “… a sense of responsibility to change the world …,” and correct things they see that they didn’t think were right,” like ending the Vietnam War, marching and sometimes dying to advance Civil Rights, and launch the Women’s Movement, Gay Liberation, the Chicano Insurrection, Earth Day, etc. And they also wanted to, ” … associate with brands that reflect [ed] their own values and beliefs, and that allow[ed] them to express their individuality.” And I’m sure Millennials felt the same way. Who knows? Maybe even Gen Xers had ideals once. In other words, I think it’s safe to say that young people are generally idealistic, generally feel they can do a better job running the planet than their parents and grandparents, and prefer brands and companies that reinforce their values and… Read more »
2
|
0
-   Share

BNC is a great example of how physical retail stores remain relevant, particularly to a generation that is known for being digital natives.

While Gen Z is perceived as harder to reach and to attract than prior generations, that may be reflective of the sheer number of shopping choices they have grown accustomed to that have been enabled by technology, rather than by their own personality traits. They consume media from a number of sources, and engage with brand influencers that are different than those of prior generations.

That said, their economic buying power is large and getting larger each year. The key to reaching this consumer is to understand where they live online, and to be where they are headed. They trust their peers more than institutions or brands. They have the ability and inclination to do more online research than prior generations. In short, they are more “work” to reach, but too big a market to dismiss.

Braintrust
"The Gen Z shopper is contributing to the popularity and growth of experiential retailing and sees offline, physical shopping as a destination."