Can a socially distanced event launch a sneakerhead hub? 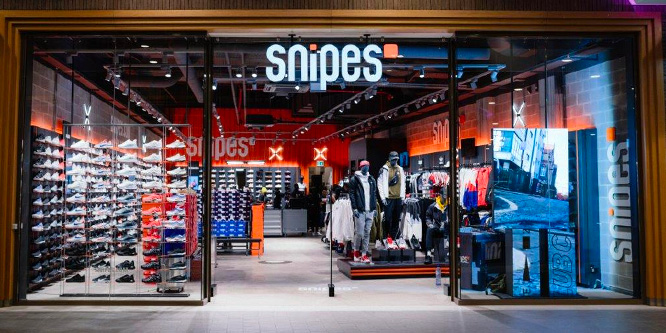 On July 9, international streetwear and sneaker retailer SNIPES increased its U.S. footprint with its first stateside experiential flagship, launched in a city where there are both plenty of sneakerheads and multiple experiential footwear flagships to choose from.

The new location, a store concept the retailer calls SNIPES 2.0, is opening in Downtown Brooklyn across from Barclays Center, according to sneaker trade publication Kicks on Fire. The store concept, meant to be a neighborhood hub, exclusively uses LEDs and screens for its in-store signage, eschewing cardboard stand-ups and other paper-based signage. The launch event is planned to be heavy on giveaways and will feature celebrity appearances as well — albeit virtual ones. Rapper DJ Khaled serves as the brand’s chief creative officer and will be announcing the giveaway of his own branded Air Jordan 3 via livestream.

A star-studded, experiential store launch would seem to pose challenges in the era of the novel coronavirus pandemic. The pandemic continues to limit normal shopping behavior, especially with regard to retail that relies on in-store experience.

SNIPES has accounted for this to some extent, as the store opening event will be limited to 50 percent capacity and require masks and distancing of six feet while shopping, according to Kicks on Fire.

Such things might be hard to enforce in practice, though. Yahoo reports that at the relaunch of the Nike store in London, social distancing guidelines were largely disregarded.

Even in a post-pandemic world, the competition for such a flagship could be stiff. NYC is already a hot battleground for co-opetitive urban-focused sneaker retailers positioning their flagships as “neighborhood hubs.”

Last year, Foot Locker launched its Power Store in Manhattan’s Washington Heights neighborhood. The experiential outlet, which first gained traction in Europe, was one of three opened in major U.S. cities as the chain pivoted away from the mall and towards more customer-focused, standalone stores.

Nike’s six-story experiential flagship on Fifth Avenue in Midtown, also known as House of Innovation 000, is another sneakerhead destination SNIPES may be competing with, even though Nike is one of the major brands that SNIPES, like Foot Locker, carries.

DISCUSSION QUESTIONS: Is now the right time for SNIPES to try to establish itself more firmly in the U.S. sneaker market with a brick-and-mortar flagship? How can SNIPES both differentiate itself from Nike and Foot Locker while at the same time contending with pandemic-related concerns?

Please practice The RetailWire Golden Rule when submitting your comments.
Braintrust
"I’d rather refine my model in challenging times than operate in a false economy like the past few years."

"Had this happened six months ago the concept of streaming star appearances and social distancing would have seemed odd but it will be just the norm today."

"Launching a new model in a continuously changing retail and social environment is sheer folly and a poor business decision."

6 Comments on "Can a socially distanced event launch a sneakerhead hub?"

The dynamics of a pandemic and recession create the perfect stress-testing environment for a retailer to trial a new model. Sneakers and streetwear is a fire-hot category, and the store is in a densely populated area that can guarantee a higher degree of quality traffic than a traditional Tier 1 shopping center launch. Economic conditions will eventually improve, but I’d rather refine my model in challenging times than operate in a false economy like the past few years. (I.e. Instagram DTC fantasy land.)

These events normally draw a lot of customers and are generally a big deal especially when held at flagship stores. I am very interested to see how they will coordinate these events and still practice social distancing and adhere to standards that will keep the customers safe.

The opening of SNIPES’s flagship brick-and-mortar store will generate a lot of attention. Since the pandemic began there have been very few new brick-and-mortar retail locations opening up, and opening a flagship location in NYC is sure to generate more brand awareness. Had this happened six months ago the concept of streaming star appearances and social distancing would have seemed odd but it will be just the norm today.

These days when it comes to athletic shoes it seems like if you build it, they will come. And as such I suspect the SNIPES store will be popular at first, despite the pandemic. The question will of course be if they can develop unique and highly sought-after assortments to help sustain their popularity, as I don’t see a lot in the article to make me think that their store experience will be truly compelling.

Anyway, this might actually be a good time to open up, with many things still closed and people looking for things to do and places to go. Then again, I may be wildly wrong (and admittedly the crowds that have been waiting for the Guggenheim and the Met to reopen probably don’t see this as an alternative).

And I think the cart may be before the horse: popular brands > popular flagships, not the other way around … but I certainly wish them well (and safety).

Launching a new model in a continuously changing retail and social environment is sheer folly and a poor business decision. You cannot ignore a pandemic, especially in NYC and say that it applies to everyone but you. It would only take a few moments to ask yourself why all of the stores around you were so empty and people only came downtown in fear, for any businessman to put the brakes on supporting this environment.

Staffing and attending this event is sheer folly and really just a bad decision.

Respect this pandemic, respect other’s lives and respect what we still don’t know about this medical monster, let alone what we need to know to do business while surviving it.

Braintrust
"I’d rather refine my model in challenging times than operate in a false economy like the past few years."

"Had this happened six months ago the concept of streaming star appearances and social distancing would have seemed odd but it will be just the norm today."

"Launching a new model in a continuously changing retail and social environment is sheer folly and a poor business decision."