Can Barneys tap into ‘drop’ culture? 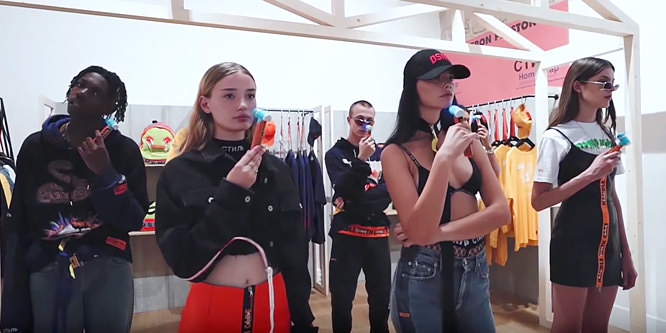 In a partnership with Highsnobiety, the streetwear publication, Barneys is launching “thedrop@barneys,” a two-day event highlighting 30 exclusive capsule collection and product “drops” — or limited-edition launches — at its Madison Avenue flagship in New York City.

The event builds on the popularity of drop culture, which uses a scarcity model to stoke demand. The trend was pioneered in the U.S. by skatewear brand Supreme, which often collaborates with other brands on limited releases. Hyped on social media and streetwear blogs, the releases often sell out immediately and appear later on eBay at much higher prices.

Drops have become more common in recent years with buzz around limited-edition sneakers, including Kanye West’s Yeezy line with Adidas, Nike’s Air Jordan and Vans’ many designer collaborations. Target and H&M have both found success with limited-edition designer capsules.

Thedrop@barneys, also taking place on Barneys.com, will feature more than 80 designers and vendors who will be participating over the weekend. The event will feature more than 40 in-store activations, including an appearance by Tariq “Black Thought” Trotter, the lead MC of The Roots, the hip hop group and house band on Late Night with Jimmy Fallon; as well as custom hat orders from Nick Fouquet, Converse chain-stitching customization, SWEAR shoe customization, as well as celebrity tattoo artists and ear piercers.

Those interested in attending will have to register beforehand.

Said Daniella Vitale, CEO, Barneys, in a statement, “We are introducing a whole new concept — blending exclusive launches from the best new designers, one-of-a-kind experiences, compelling content, food and music, giving our customer a new and innovative way to explore and experience Barneys.”

To some, the popularity of drops shows that younger Millennials are moving away from mainstream brands such as Abercrombie & Fitch in favor of more exclusive items.

“They are excited, not just by a product’s rarity,” Avery Booker, CEO of Enflux, a digital influence-mining tool, told The New York Times, last year, “but also by what credibility owning that product can give them within their social media communities, as well as its possible resale value.”

Please practice The RetailWire Golden Rule when submitting your comments.
Braintrust
"The appeal of the drop culture is a result of one of the unintended consequences of the the age of e-commerce: the commodification of everything."

"Whether it’s adopted for the future or not, Barneys will gain insights that will help it adapt, learn and improve performance."

"There is a limitation to drop culture. Namely that the group it targets has limited funds."

16 Comments on "Can Barneys tap into ‘drop’ culture?"

The appeal of the drop culture is a result of one of the unintended consequences of the the age of e-commerce: the commodification of everything. People are starving for ways to express their individuality, and the Barney’s flagship event packages unique styles with another unintended consequence of the age of e-commerce: the rise of unique, entertaining and enriching store experiences. I expect these events to be extremely popular.

Whether it’s Millennials or an older generation that this type of event attracts, if it creates a sense of newness and exclusivity and it attracts customers by creating excitement, go for it. Barneys already knows that this is temporary, but can repeat the concept with other brands in other categories.

Barneys is doing this right in the sweetspot of experience-hungry shoppers. Kudos for being brave enough to stand up against everybody else in the price-drop race to the bottom.

We live in a culture of ubiquity. This means that very few products feel special or rare and because of that consumers quickly get bored with shopping and buying.

Drop culture cuts through this malaise in two ways.

First, it creates a sense of scarcity and exclusivity. Interestingly, this works because of the culture of immediacy where consumers still want and crave the latest thing, all the more so if that thing is hard to get hold of.

Second, it is a form of entertainment — an event that people can engage with and which plays with our emotions more than a standard shopping experience.

The risk is ubiquity itself. The more of these events there are, the less special they will be and the more consumer interest in them will wane.

The other challenge is volume: a large scale retailer needs to balance this kind of activity with a traditional volume play if it is to be financially successful. So this drop culture is not a panacea or a replacement for traditional methods of selling.

Millennials like what they call personalization, or what non-Millennials might call mass customization. At any rate the idea is basically the same — look like an individual but not in a way that makes you look like part of the “out group”. As to the longevity of drop culture, I guess it really comes down to product design and the collective social whim. If they match, it could go on indefinitely. Too may misses and … well … drop culture will drop dead. Barneys’ approach strike me as too much of a good thing. I think they would have been better advised to spread out the “drops.”

Exclusivity is a driving factor behind the appeal of drop culture. Barneys has found a way to take this exclusivity to the next level by not only offering exclusive products, but by also offering a shopping experience different from other retailers. In order for retailers to thrive, they must provide experiences that set them apart. The combination of both a unique product and a unique shopping experience is exactly what Millennials are looking for. Barneys is spot-on when it comes to capitalizing on this trend.

Thumbs up. Experimentation is the key to retail survival. I was in that flagship store one week ago. The general demographic of the store is … not youthful.

In targeting a more youthful demographic, this is a great experiment to introduce new customers to Barneys. This is an acquisition channel reaching shoppers they’d never find through their traditional offline and online marketing approaches.

As long as the event is well-executed, and Barneys is prepared to learn from the test, it will be a success in the long run. Whether it’s adopted for the future or not, Barneys will gain insights that will help it adapt, learn and improve performance.

This is all about the exclusivity of the event. Just being there is a social statement in and of itself. No self-respecting NYC Millennial would miss an event like this. They would lose their cred!

Sarcasm aside, events like this are driven by the “need to be seen” among the target audience. By setting the stage (literally) for this to be a can’t-miss event for Millennials, Barneys is also setting the stage for a huge success.

Does this happen at more than one location in New York? Sounds like it would have great appeal to Millennials but has only limited appeal if it is at one location. Coordinating this activity across all locations would be challenging.

I hope this event succeeds. It will provide a much-needed response to the hand-wringing from traditional retailers about how to deal with the threat of Amazon to their business model. The experience that this type of event offers is an innovation in the retail landscape, and how retailers can really differentiate and attract shoppers. Notwithstanding that these will be shoppers willing to pay full price for the exclusive products, not discount shoppers lured in through flash sales.

This isn’t a unique reality of Millenials.Younger generations have always wanted their own brands rather than the brands of their parents and older siblings.

And there is a limitation to drop culture. Namely that the group it targets has limited funds. As an exceptional event, drop culture is a powerful thing. But it has to be kept special — this group lacks the deep pockets of people who’ve lived more life.

The idea that something is “just for them” or that their experiences are somehow special, uniquely individual or distinct is a characteristic of this consumer group. This drop culture approach is totally sympatico with this: dare I say abundantly narcissistic, perspective characteristic of Millennials. This approach will appeal like a flame to a moth or candy to a baby for Millennials.

Long-term trend? I’d say yes, but let’s see what the Gen Z’ers manifest as consumers and as characteristics.

I am betting “BIG HIT!” by our friends at Barneys with this promo.

“Popularity of drops shows that younger Millennials are moving away from mainstream brands such as Abercrombie & Fitch.”

I would question how many people move from A&F to Barneys, a quantum leap in price, accessibility and … probably every other metric one could imagine.

The exclusivity of product drops is very appealing to younger Millennials who are active on social media. Owning a sought-after exclusive product that they can show on social media creates admiration from their network of social friends and elevates their status.

The addition of celebrity events included in the “thedrop@barneys” campaign creates excitement and buzz that appeals to consumers’ love of the theater of shopping. Retailers are looking for ways to attract more consumers to their physical stores and making shopping fun and exciting is definitely a smart strategy and a trend that will continue to evolve with new creative approaches that tap into the theater of shopping. The key is to make shopping fun, unique and memorable. This curated concept will play well everywhere.

If I’m correct, it was actually Target inventing the “drop culture” with limited editions of Missoni and more exclusive brands in 2011. Supreme did not start the “drop culture” until years later as everybody wanted to emulate Target’s “drop” success.

I never understood why Target dropped this phenomenon they created — it was a way to generate viral buzz all year around. I believe there was a change in leadership, but it is good to see Barneys picking up the ball Target dropped.

I’m surprised more stores don’t do this, especially some smaller stores that are more agile. When reading this article one word comes to mind: “exclusivity.”

No one wants to be the girl in the UGGs, black leggings and North Face holding the Starbucks anymore. Shoppers want a unique experience and want to purchase products that separate them from the crowd, and the best part about it is that they are willing to pay for it.

We saw this when Whole Foods launched its new store at the Domain in Austin, Texas. They reached out to brands and asked to have store-specific products that would only be available at that location.

Barneys is onto something and I expect more retailers to try to catch up.

Braintrust
"The appeal of the drop culture is a result of one of the unintended consequences of the the age of e-commerce: the commodification of everything."

"Whether it’s adopted for the future or not, Barneys will gain insights that will help it adapt, learn and improve performance."

"There is a limitation to drop culture. Namely that the group it targets has limited funds." 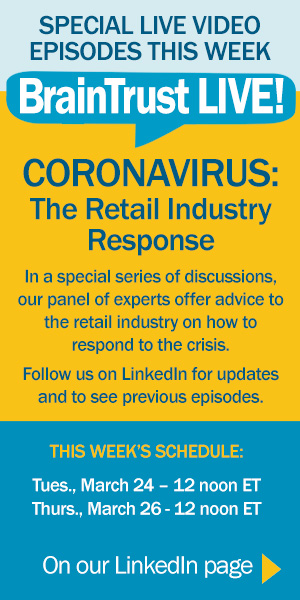 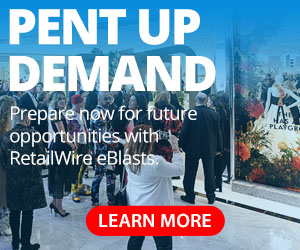