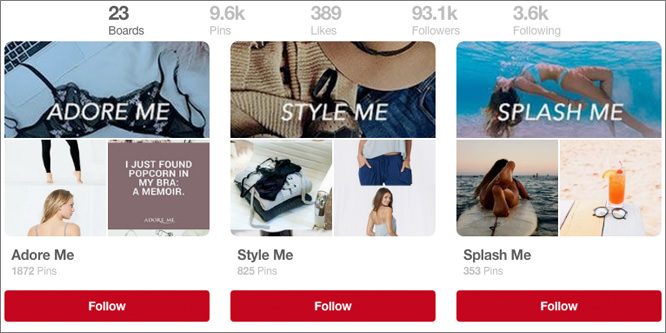 Pinterest Founder and CEO Ben Silbermann often protests that Pinterest is not a social media platform. Instead, it’s a “catalog of ideas.”

Personally, I use Pinterest as a virtual inspiration board that stores ideas along with easily accessible shopping lists, rather than to “socialize” with friends and followers.

It seems as though I am not alone. A 2015 Bizrate Insights survey showed that 70 percent of consumers said they use Pinterest to “get inspiration on what to buy.”

For more inspiration, here are some unique Pinterest marketing tactics used by retailers:

DISCUSSION QUESTIONS: Do you see Pinterest’s value as more of a marketing or purchasing tool? How great a role will Pinterest and other such social platforms play in driving social commerce in the years to come?

Please practice The RetailWire Golden Rule when submitting your comments.
Braintrust
"We are seeing retailers focus more on the creative aspects of a purchase because uniqueness sells."

"Pinterest may continue to grow, however retailers need to stay close to these trends and be agile enough to switch/add social channels as needed."

Not only is Pinterest a treasure hunt, but it sparks creativity and gets customers excited about products. It’s a place for ideas and identification.

We are seeing retailers focus more on the creative aspects of a purchase because uniqueness sells. Pinterest allows users to discover their unique style and then purchase items suited to it — making them their own personal shopper. Plus, making customers think a purchase is their idea is marketing 101.

The takeaway from this is that not only is Pinterest a social sharing platform, but it allows customers to discover their individual style. “Buy” buttons on Pinterest are essentially selling customers themselves, which is smart branding.

I was invited to attend a client’s strategic planning session a few years back. Advisors from other fields also attended — including their e-commerce agency. Part of their presentation addressed a (then) somewhat new platform called Pinterest. From the sidelines I remarked “Pinterest sucks.”

The agency presenter looked at me and said “excuse me?”

“It has already cost me one remodeled bathroom and I’m staring at a kitchen remodel next month thanks to that site,” I replied. “Pinterest sucks!”

Pinterest IS a social channel and it has all the value to retailers (and CPG brands) that any popular social channel has. Its format definitely lends itself to being a great marketing tool, and folks of all ages are getting more comfortable using it, not just Millennials.

As we have already seen with other social platforms, public interest and usage will wane for most channels over time and new ones will emerge as popular (Anyone remember MySpace?). Pinterest may continue to grow, however retailers need to stay close to these trends and be agile enough to switch/add social channels as needed.

I love Pinterest and often catch onto trends that make my style board, creative boards and then I’ll shop online for the same. Buyable pins are useful, but I seldom buy from them. Additional features such as search for these items at a Target or Macy’s or even Micheals would really help to enhance my experience.

Thanks for the interesting post and discussion. There’s another good reason to love Pinterest. Pinners. The reason why we can (1) Sell; (2) Advertise; and (3) Entice customers back to the store is because there are over 175mm monthly active users to whom we can… sell, advertise, and lure into our brick & mortar stores. The question of whether to include Pinterest in your customer experience mix — browsing, shopping, buying, owning — is long past. The retailers who are behind should catch up fast — lest they lose their fair share of Pinterest engagement and sales. Working with mid-sized retailers, we’ve found that they know they need to be there, and grapple with “how.” One of them shared his learnings in this webinar about how to market and sell on Pinterest. Pinterest has its own SEO, so to speak. How do you optimize your Pin content? What are the most effective marketing techniques? Given that not every competitor knows the answers, those that do are gaining share in the channel. It will be interesting… Read more »
0
|
0
-   Share

Braintrust
"We are seeing retailers focus more on the creative aspects of a purchase because uniqueness sells."

"Pinterest may continue to grow, however retailers need to stay close to these trends and be agile enough to switch/add social channels as needed."