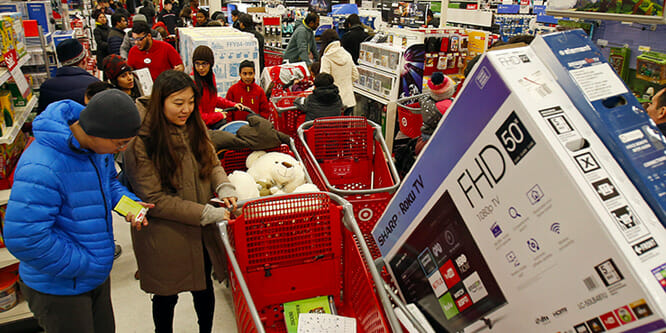 The Christmas selling season is off to a flying start. Traffic and spending between Thanksgiving and Cyber Monday exceeded even the most positive of forecasts. Now that the Black Friday and Cyber Monday excitement is over, however, what will retailers do to maintain the sales momentum?

Many, based on past experience, will continue to promote deals in the coming weeks. But will consumers go for 20 percent discounts when they were mulling half-off breaks just a few days ago? Some consumers, again based on the historical behavior, will wait for retailer desperation to set in — and the bigger discounts that go with it — as the days leading up to Christmas dwindle.

New research from Rakuten Marketing claims that Amazon.com’s Prime Day in July along with rival deals from competitors have also affected Christmas shopping. Twenty-four percent of those surveyed said they began shopping for Christmas in the summer, while 59 percent began making holiday purchases in the early fall.

Tony Zito, CEO of Rakuten Marketing, called the migration to earlier shopping “a marked shift in traditional retail patterns that is triggering changes in retail promotional strategies, including an extended peak holiday shopping period that has started as early as two weeks in advance of Black Friday this year.”

While many if not most consumers have gotten an earlier start on the holidays, 53 percent surveyed by Rakuten Marketing said they planned to spread their shopping budgets over the season and continue looking for special deals into December.

More than 174 million Americans shopped online and in stores from Thanksgiving through Cyber Monday, according to the National Retail Federation (NRF). That number was higher than the 164 million previously forecasted by NRF and Prosper Insights & Analytics.

DISCUSSION QUESTIONS: What do retailers need to do to remain engaged with customers over the rest of the Christmas selling season? Do you expect to see a significant decline in last-minute shoppers this year?

Please practice The RetailWire Golden Rule when submitting your comments.
Braintrust
"The holiday season is a marathon and retailers need to keep their collective foot on the gas pedal. "

"This year, with consumer savings rates at 20-year lows, and the stock market on a tear, I see continued shopping up to the Christmas holiday."

"Black Friday and Cyber Monday are all about deals while the rest of the holiday season, for online retailers, is all about execution..."

11 Comments on "Can retailers keep their holiday sales mojo working after Cyber Monday?"

There does seem to be a change in the holiday season shopping cadence, as consumers have never had more choices for where and how to buy. While Black Friday and Cyber Monday still get the headlines, the holiday season is a marathon and retailers need to keep their collective foot on the gas pedal. Retailers need to keep their stores well-stocked and staffed — focus on reducing conversion and transaction friction. And remember, there will always be last-minute shoppers.

I expect that there will be a slight lull in activity between now and mid-December. However, that’s perfectly normal. Consumers cannot continue to spend at the pace they did over Black Friday, neither do they have the time or inclination to do so.

There is slightly more planning in holiday shopping now, but there will still be a last-minute rush and an uplift in activity from mid-December onward. This will likely be helped by the two days before Christmas Day falling on a weekend.

Retailers need to keep up the momentum by keeping things fresh. They should have promotions of the week with featured items and prices offered for a limited time. They should present opportunities that appeal to customers. Retailers need to be creative and use promotional teasers. One thought is letting the customers in-store today see and hear about what will be offered next week and make that offer only available for one or two days. Use promotion, hype and excitement to keep the customer enthused. The retailer could offer their customer the opportunity to reserve the hot discounted item for next week, and then they could come back into the store and get the item at that price. If retailers do that, they’ll not only make the sale, but they’ll get the customer back in the store.

Mojo? In-store, it seemed like the mojo was asleep. From reports I’ve read sales were only up slightly from last year — a very down year. If brick-and-mortar wants to justify its existence, it needs to ramp up profits from physical retail sales in the next four weeks and beyond.

I’m confident that by season’s end, m-/e-commerce will again report significant sustained growth that will portend new levels of store closings in 2018.

Tis the season. The move to online isn’t going to stop shoppers from still going to stores. More so this year and increasing every year is the requirement that you stay in stock and continue to ensure that your storefront is consistent across channels. Shoppers are going to need to buy for the holidays, but won’t put up with a sub-par experience (online or in-store)

I don’t trust those findings — they seem to contradict fundamental human nature. Yes there are some who think through holiday gifts six months in advance — but not 25 percent.

In this time when all types of research and digital organizations tell us about a re-invented human being, we need to remember an outstanding observation by Bill Bernbach:

“It took millions of years for man’s instincts to develop. It will take millions more for them to even vary. A communicator [and retailer] must be concerned with unchanging man.”

In 2016, 53 percent of online holiday sales (Nov 1 – Dec 31) came after Cyber Monday. With Christmas on a Monday this year there MIGHT be an inclination for some consumers to wait until the Saturday and Sunday before, which means that they’d be buying in brick-and-mortar stores. Black Friday and Cyber Monday are all about deals while the rest of the holiday season, for online retailers, is all about execution: Being in-stock on key items and being able to fulfill quickly and in line with promised delivery dates.

Meaningful engagement = relevant differentiation. Messaging/media must accurately reflect what the target audience needs to solve shopping goals. The U.S. median income is $58,000. That means many live paycheck to paycheck. Which means folks will shop when they have money. Certain categories depend upon the last week and its last-minute shoppers, primarily men. They spend on jewelry and sleepwear. So it will happen this year too.

Those in the bubble shop where and when they want. The rest of us shop when they are able and those transactions will drive comps this holiday.

This year, with consumer savings rates at 20-year lows, and the stock market on a tear, I see continued shopping up to the Christmas holiday with a nice strong finish at maybe 3 percent year-over-year sales results in the U.S.

I think the only impact of the reported “early shopping” is that we’ll see a smoother purchase rate between now and late December with less of an upswing right before Christmas as usually is expected. No doubt mobile and e-commerce will continue to be critical as it provides the most convenience for customers — and we’ll see how well retailers’ BOPIS programs perform as I expect many shoppers will leverage this as a time savor for last minute shopping. That means the winning retailers form the Thanksgiving holiday weekend will continue to outperform other retailers a the season progresses.

The retailers that excelled between Thanksgiving and today need to keep the wheels turning and get shoppers to return again. There will always be last minute shoppers, because with so many people on their lists, forgetting a few things is inevitable. On the other hand, being able or willing to buy everything over just a few days at the beginning of the holiday season seems unlikely for many shoppers. With that said, they’ll need to buy a few more things and incentivizing them to return to your business, instead of defecting to a competitor can help drive loyalty that extends far beyond the holiday season. This could come in the form of a discount, free gift, personalized promotion, or unique experience, to name just a few possibilities.

Braintrust
"The holiday season is a marathon and retailers need to keep their collective foot on the gas pedal. "

"This year, with consumer savings rates at 20-year lows, and the stock market on a tear, I see continued shopping up to the Christmas holiday."

"Black Friday and Cyber Monday are all about deals while the rest of the holiday season, for online retailers, is all about execution..."