Can Walmart beat Amazon, Facebook and Google at the online ad game? 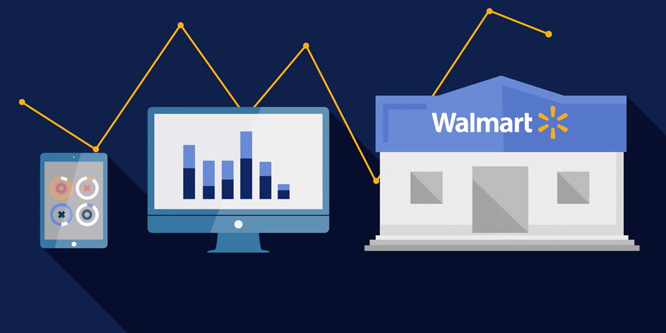 In a statement, Stefanie Jay, Walmart Media Group SVP and general manager, wrote that Walmart has been “quietly building our advertising business” and Polymorph will fine-tune targeting efforts.

“Polymorph’s technology, which includes a high-speed ad server, a self-serve interface and server-side header bidding, will make advertising with Walmart easier for thousands of brands while delivering more relevant digital ads to consumers,” Mr. Jay said. “This technology complements Walmart’s current omni-channel ad targeting and measurement solution and will provide a platform for continued future innovation such as real-time auctions across multiple ad-pricing models (cost per click, cost per impression, cost per conversion).”

The Polymorph acquisition arrives only months after Walmart brought its ad sales force in-house to better leverage its shopper data both online and offline for advertisers.

“Our data has never been monetized and we have a tiny ad business,” Walmart CEO Doug McMillon told analysts last year, according to a Bloomberg report.

Walmart is likely responding in kind to the inroads being made by Amazon.com, which became the third largest ad platform last year behind Google and Facebook. Walmart said 90 percent of Americans shop at Walmart every year and its website and stores attract nearly 160 million visitors weekly.

“Simply put, we can help brands understand if someone saw their ad on Walmart’s platform or across the internet and then purchased the product in-store or online,” Mr. Jay wrote. “No one else can do this at scale like Walmart.”

In an Advertising Age article in early March, Jeff Greenfield, COO of marketing attribution firm C3 Metrics, predicted, “With the strongest retail base in the U.S. and massive amounts of shopper data, Walmart’s entry and Amazon’s growth will dilute Facebook and Google’s share of brand dollars by 25 percent over the next 18 months.”

Please practice The RetailWire Golden Rule when submitting your comments.
Braintrust
"Given the speed and agility with which the Walmart media team is executing, I expect to see them in the top three very soon."

"I would ask why there has to be a “winner.” There appears to be enough room for a number of players to be successful."

"It only makes sense for Walmart to monetize their data. Retailers have been doing this for a long time just in other ways."

12 Comments on "Can Walmart beat Amazon, Facebook and Google at the online ad game?"

To the extent that this is simply the digital execution of retailers’ traditional advertising and promotional programs for vendors — it makes total sense. For Walmart to compete with broad-based search platforms like Google or social platforms like Facebook in the general online advertising market is quite a stretch. It all depends on what Walmart’s definition of “ad business” is.

Saying Walmart’s digital ad business is “tiny” should be taken in context. Total 2018 Walmart revenue was $136.3B billion. Amazon ad sales are estimated to be $3 billion, compared to Facebook at $23 billion and Google at $32.6 billion. Clearly, Walmart sees opportunity and wants to add some “Bs” to their bottom line. Simply put, retailer platforms are where the shoppers are — they own the digital shelf and brands need to take advantage of that (assuming retailers offer accountable results).

Walmart will certainly put a dent in the advertising market. My first thought is not about which advertising house wins. It’s about who loses. Me, the consumer. Yet another monster throwing more ads at my eyeballs. Yikes. Seems like good news for the ad-blocking business.

I predicted three years ago that retailers moving into adtech would be the next big thing. I predicted Amazon would become #3 in ad revenues only exceeded by Google and Facebook. I also said at the time that Amazon was like the combination of Google and Walmart and, in fact, they have since announced a deal. Here is the thing — the predictions were based on a firm belief in the power of precision targeting based on behavioral signals. Walmart can easily compete on that basis for ad dollars but they have to get their act together in the digital space. They don’t think about digital as much and for that reason have one-tenth the business of Amazon online while being bigger overall. Ultimately, the margins in the ad business are huge and Walmart will have to move into that space in a big way and will be very successful — potentially forming a top five that will include Netflix (but that’s a prediction for another day and topic!)

In significant segments, like grocery and household products, Walmart’s data set is vastly superior to that of Amazon, Facebook and Google – specifically related to who buys what. Linking that purchase data to ad exposure definitely strengthens their bottom funnel competitive advantage. However, competing for a top three ad platform position will require Walmart to establish a “top of funnel” competitive advantage as well. They can do this by strengthening their top funnel data set (preference, intent, psychographics) to compete with Facebook the search dominance of Google and Amazon. They can also drive growth by leaning into the need for better digital video ad options to compete with YouTube and Facebook who are constrained by their audiences acceptance of ads. Net net – given the speed and agility with which the Walmart media team is executing, I expect to see them in the top three very soon.

I would ask why there has to be a “winner.” There appears to be enough room for a number of players to be successful.

What Walmart has is the power to force the brands that sell in their stores and on their marketplace to spend money on ads. I believe they will take a large amount of business from Facebook and some from Google. I don’t think Amazon will be affected in the least.

The issue we are going to have online is the same thing that happened to television. Brands are going to spend money advertising and thinking in terms of impressions and not returns. The beauty of the digital ad world has always been the ability to track and measure the return. But I see brands spending on ads just to be seen and not paying attention to what they are generating. Just spending to budget. This is going to facilitate that mentality.

It only makes sense for Walmart to monetize their data. Retailers have been doing this for a long time just in other ways. They used to give away their shopper card data in exchange for rudimentary analytics. Now retailers charge big money for it and have much higher expectations for reporting and insights.
The trend may continue to other retailers, but few have the size and scale to generate significant profits or interest from brands. With Google, Facebook, Amazon, Walmart, Target, Kroger, Albertsons, and Ahold Delhaize all in the mix, it becomes a bigger job for brands to manage their budgets and allocate appropriately.

Smart move on Walmart’s part. The combination of their in-store and online data, with the acquisition of Polymorph, will certainly help them become a major ad player. Brands have been moving dollars to Amazon, in part due to the way Amazon can target customers using its data. Brands already selling through Walmart channels should definitely be exploring their ad platform.

Walmart has a treasure trove of brand data — it makes total sense that they leverage it to compete with online advertisers. When they develop a strategy, they are masters of execution.

Expanding its online ad revenues is a logical move for Walmart. However, they have a long and challenging road ahead to be a worthy competitor of Google, Facebook and Amazon.

Google is the toughest player to beat, as they are the online ad king. They have most extensive experience and loyal customers. However, you can’t underestimate the power of Walmart and Amazon.

With Amazon, Facebook, Google and now Walmart recognizing the value of a data-rich shopper audience, all types of e-commerce players and open internet publishers will be forced to raise their game to compete. Retailers will need to make their audiences accessible to marketers or risk losing brand dollars to platforms that do. Publishers will need technology that links their audience to its shopping behavior across all devices. Marketers enjoy the channel diversity that Amazon and now Walmart bring, cracking open the duopoly like a raw egg. The rest of the open internet could also potentially benefit from Facebook’s reduced dominance.

Braintrust
"Given the speed and agility with which the Walmart media team is executing, I expect to see them in the top three very soon."

"I would ask why there has to be a “winner.” There appears to be enough room for a number of players to be successful."

"It only makes sense for Walmart to monetize their data. Retailers have been doing this for a long time just in other ways."