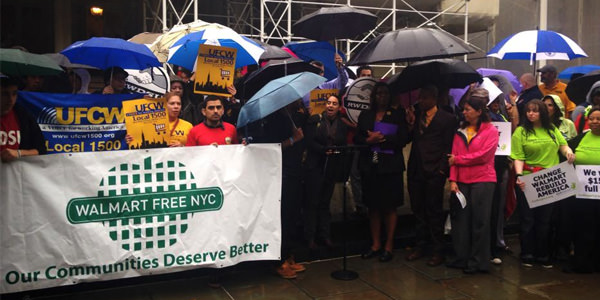 Over the years, big city politicians, with those from New York City in the lead, have opposed the entry of Walmart into their domains for a variety of reasons. And there are still no Walmart’s operating within NYC’s five boroughs. Yet, a new poll by Quinnipiac University shows that 55 percent of New Yorkers want Walmart as a shopping option, with 39 percent saying no. And 64 percent say they would shop at a Walmart if it were convenient.

Democratic Mayor Bill De Blasio and most of the city council, however, still say no. Crain’s New York Business says this political strategy is self-defeating because 25 percent of respondents go to the suburbs to shop Walmart stores. And it is obvious that many New Yorkers go to the burbs to shop other big box stores, discounters and outlet malls.

With Walmart raising its minimum pay, it may be harder to rail against them as a low wage company, although they are still seen as offering modest pay and benefits, and are definitely seen as anti-union. And the main argument about Walmart hurting small, local businesses won’t go away.

Still, with the most support for Walmart stores among the poorest New Yorkers — and with that constituency standing to gain the most from the stores in terms of cheaper shopping options — it might get harder and harder for politicians to turn them away.

There might not be any better locations left for Walmart in the U.S. in terms of demographics and sheer population, so it has to be at least in the back of top Walmart execs’ minds to make another push for approval to build in the city.

Do you think opposition to Walmart and other big box stores in urban centers is on the wane? What, if anything, has changed in consumer perception over the years on the subject? Do you see Walmart opening stores in NYC in the next several years?

Please practice The RetailWire Golden Rule when submitting your comments.
Braintrust
"Whenever I visit NYC and stop in a drugstore or grocery store the prices are a shock. Why live in a city where a fair price is not possible? Walmart will change that. Change is the NYC style, right?"

"I don’t think opposition to Walmart is on the wane. In fact, here in Miami, the city and abutting neighbors have been fighting a store opening for almost a decade! But like a dog with a bone, as of now Walmart has been unwilling to let go (although ground has not yet broken)."

"They will be in NYC, but on their time schedule, which could be a year or five years, but they will be there. Shutting them out seems possible, but it is almost impossible to keep them out for good."

12 Comments on "Consumers to NYC: We (still) want Walmart!"

With the bankruptcy of A&P, consumers will certainly welcome a low-price option from a financially healthy company. However if you are an aged A&P employee about to lose everything, going to work for Walmart would be emotionally and financially devastating. Opening Walmart would be a defeat and slap in the face to the local labor unions. If Walmart really wanted to be in NYC they would be there already and they are not. IMO those poor neighborhoods are just going to have to go without a supermarket and I don’t see Walmart opening there for several more years, if ever. Perhaps after Fairway goes bankrupt, Walmart’s chances will get better.

NYC and the other weird cities are finally understanding that it is OK not to have to overspend for simple stuff like milk. Walmart will bring NYC residents the ability to take advantage of lower, non-convenience store pricing. Whenever I visit NYC and stop in a drugstore or grocery store the prices are a shock. Why live in a city where a fair price is not possible?

Walmart will change that. Change is the NYC style, right?

I don’t think opposition to Walmart is on the wane. In fact, here in Miami, the city and abutting neighbors have been fighting a store opening for almost a decade! But like a dog with a bone, as of now Walmart has been unwilling to let go (although ground has not yet broken). The problem isn’t that a Walmart is coming. It’s coming to an area that it won’t fit into correctly. And the company has thus far proven tone-deaf to requests to just go 20 to 30 blocks north, where they could do some genuine good for the neighborhood. That is the crux of the problem. I believe it’s incumbent on local officials to think about the character of the surrounding area before letting big box retailers like Walmart encroach. I’m also sure that DeBlasio is interested in keeping local merchants happy as well. We can’t have a world of big box retailers only. It’s frankly boring, even when they’re high-end chains. Believe it or not, the “majority” doesn’t always know what’s right for… Read more »
0
|
0
-   Share

It is amazing how quickly governments and politicians that insist on knowing what is right for the serfs go away over and over throughout history. As for the big corporations and their big budgets and many lawyers they too forget what it takes to stay in place. Today there are few if any companies that can provide a living wage to their employees. Likewise there are few if any politicians that know how to provide for their constituents in a way that is fair and beneficial to all citizens and laborers. Even in this discussion we dig trenches instead of building relationships. Human decency on the haves’ side is on the wane.

The consumers want stuff as low-priced as possible and could care less who or what store it affects, as long as they get what they need for the right price. This will not change and Walmart knows it, so they will wait until the low hanging fruit is perfect to pick the location they want, the tax abatement they want and the free road improvements they insist upon before they enter anyplace. Sure the local small businesses don’t want them, as well as the labor unions, but it will not stop them in the long run. Our local Walmart has shut down several supermarkets in the last 15 years, added on to make it a Supercenter and this year they got the state to provide them with an extra lane so more people can pack the place at the taxpayer’s expense. What business wouldn’t want to have this kind of leverage? They will be in NYC, but on their time schedule, which could be a year or five years, but they will be there. Shutting… Read more »
0
|
0
-   Share

You’re not going to believe this if you’ve never lived in NYC, but there are a lot of “normal” people there! Of course they want Walmart.

I think Walmart has the ability to produce some very palatable concepts for the city that will be accepted by the public and planning and zoning. It’s just a matter of time. Maybe a showroom store? They can be very innovative, so I wouldn’t put that notion past the realm of possibility.

Walmart’s recent PR moves have helped them move the needle, but NYC is still a very tough crowd.

Like Frank Sinatra sang in one of his many iconic songs, “If I can make it there, I’ll make it anywhere. It’s up to you, New York, New York.” The problem is that it is up to the city’s politicians, not its people.

As others have stated, there are normal people in New York and they want a low cost place to shop. Walmart in New York is not an if, it is a when.

Over the past several years it did not bother me to see Walmart lose a battle in the smaller locales because I was a believer (and still am) in the need for small businesses to survive. But in the larger cities, Walmart can be a boon to the economy, especially the inner cities. I can’t help but think about the recent problems in Baltimore city among some others. CVS built a store in the inner city at the behest of the local elected officials. We all know what happened to that store and the critical response to the arsonists and looters in the aftermath. But it is stores like CVS and Walmart that can help the inner cities in many ways, not limited to but certainly with local access to necessities such as food and medicine as well as supporting those communities with jobs and wages that could be spent in other inner city stores.

A couple of thoughts, as a NYC resident: The city already has Target, Ikea, Costco and Home Depot. The big box stores serve a purpose, but only for some of the people, some of the time. (Try carting a bundle of Kirkland paper towels home on the subway or the back of your bike.) And so, I think smaller format stores that serve local neighborhoods well will survive and thrive. You can’t put a Walmart in every part of town. Most people shop close to home.

Big box competition also inspires the established operators to sharpen their prices and enhance their customer service. Competition is a good thing. Certainly, Key Foods, D’Agostino and the like could benefit from a healthy kick in the butt. For these mediocre, traditional grocers, Whole Foods exists on a different plane, but a more direct challenge from Walmart might inspire them to get their act together.

With the experiments of smaller Walmart formats and the desire of consumers for low cost products in NYC, I think eventually Walmart will find a way to some neighborhoods in NYC. The effect of e-commerce and the Amazon effect means New York residents probably can get cheaper products through online into NYC then traveling to a store for non-perishables. This will add pressure to eventual allow Walmart some sort of presence…

This has been the most anti-capitalism (capitalistic) movement of its kind run by politicians who are in the pockets of the supermarket and pharmacy lobbyists and the supermarket unions.

Walmart exists quite fine in other major cities such as Philadelphia, New Haven, Hartford and Baltimore in the NE. Consumers will ultimately determine its success (or lack of).

The wage argument is BS. Demand for their jobs will be overwhelming. Walmart hires more disabled and disadvantaged than any other in its class.

There is a paucity of supermarkets in the city. Health care and pharmacy prices are ridiculous compared to other markets. (We get cost of real estate). Competition is good.

There is a Walmart as close as White Plains; it is downtown as part of a retail complex. There are no issues.

Walmart will gain entry into NYC with the next rational and intelligent NYC leadership regime; the current one certainly doesn’t fit that mold.

Braintrust
"Whenever I visit NYC and stop in a drugstore or grocery store the prices are a shock. Why live in a city where a fair price is not possible? Walmart will change that. Change is the NYC style, right?"

"I don’t think opposition to Walmart is on the wane. In fact, here in Miami, the city and abutting neighbors have been fighting a store opening for almost a decade! But like a dog with a bone, as of now Walmart has been unwilling to let go (although ground has not yet broken)."

"They will be in NYC, but on their time schedule, which could be a year or five years, but they will be there. Shutting them out seems possible, but it is almost impossible to keep them out for good."