Could an Amazon augmented reality store shake up appliance and furniture shopping? 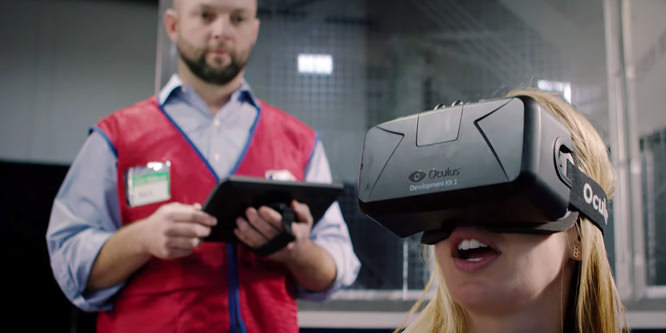 As we wait to see how Amazon’s physical retail concepts will pan out, the retailer has begun to play with more futuristic ideas. One of these concepts could steal the ball from other high-profile retailers experimenting with augmented reality (AR) and run with it.

Unnamed sources close to Amazon recently told The New York Times about the company’s possible plans for future physical stores. Among them was a home appliance and furniture showroom/store hybrid, which would allow visitors to use AR to see how products would look in their homes.

While a full store concept built around this idea may be an Amazon original, other retailers have been experimenting with AR in this area, including Lowe’s, one of AR’s biggest retail innovators. Lowe’s first attempt is the Holoroom, launched in 2014, which allows visitors to walk around a room with a tablet that superimposes on-screen virtual home furnishings over the physical space. The company then introduced the HoloLens, which uses a viewer that takes up a customer’s full field of vision, and offers a more detailed view of the holographic furnishings, down to the level of texture.

Lowe’s is also planning to roll out an AR-based tool in April called Lowe’s Vision. The app will help customers search and shop for products and navigate in-store using a smartphone.

Other companies have likewise been trying to leverage AR to allow customers to try before they buy. Gap, for instance, is piloting a mobile app that allows users to see how on-screen clothing fits on virtual mannequins.

It remains to be seen if these emerging use cases for AR will merit mass customer adoption, let alone a full store.

The other speculative concept that Amazon may be considering, according to the Times article, is a device and services outlet resembling an Apple store for Amazon products. This is in addition to Amazon’s range of physical retail concepts already being built out, like the checkout-free c-store, Amazon Go, Amazon’s new drive-thru grocery concept in Seattle, and Amazon Books.

DISCUSSION QUESTIONS: Could Amazon succeed with an entirely AR-driven home furnishings showroom/store? What should retailers like Lowe’s, who have been piloting some of these concepts, do to stay ahead of Amazon on this?

Please practice The RetailWire Golden Rule when submitting your comments.
Braintrust
"I applaud Amazon for its forward thinking but this type of showroom/store would be challenged to attract shoppers in the market to buy appliances."

"Of course Amazon will succeed with this new showroom/store. We see history repeating itself all over again."

"Definitely NOT a slam dunk on furniture sales. You have to applaud them on driving new tech to continually try to change the game. "

11 Comments on "Could an Amazon augmented reality store shake up appliance and furniture shopping?"

Amazon succeeds where it does not need people. Using VR with humans and knowing everything about the appliances is going to be much harder to do than selling online. To make the brand a player in the brick-and-mortar world it will take an awful lot of money and development for people and processes I don’t think they currently have. This idea is anything but a slam dunk.

Of course Amazon will succeed with this new showroom/store. We see history repeating itself all over again. In the 1990s Walmart’s aggressive expansion was a retail lesson for all retailers to learn from. Those that studied well now compete with Walmart on a similar scale. Those that did not learn are no longer retailers at all. The very same is happening with Amazon, they are also taking one category at a time and doing the expansion of their business. Retailers like Lowe’s and others will learn to adapt or change to meet their new competition, Amazon. Lowe’s and others can elect to get our of the category or learn to compete with better ideas such as pricing, delivery or quality but it is going to be a history lesson in retailing once again.

I’m certain that Amazon is watching Lowe’s progress with keen interest. It makes sense for shoppers and will help them as they move into more urban locations. I applaud Amazon for its forward thinking but it seems to me that this type of retail showroom/store would be challenged to attract shoppers who are in the market to buy appliances over retailers like Lowe’s, Home Depot and even J.C. Penney.

Despite aggressive expansion and great-looking stores, even hhgregg is having a hard time competing in the appliance arena.

Definitely NOT a slam dunk on furniture sales. You have to applaud them on driving new tech to continually try to change the game. They could turn this into a success if they stick with it. In the short-term, customers still want to touch, feel and sit on a couch, love seat, or recliner to get a full-body feel experience. If Amazon augments the VR with pop up, or small showrooms for select models that might be a step in the winning direction. At the end, this type of merchandise will require an omnichannel approach (both physical and digital).

The reason Amazon is considering “real” stores with appliances, food, etc., is because they know well that there are still items (e.g. appliances, food, etc.) that people have a strong need to see, feel and touch before they buy. So Amazon is considering stores that will “serve as showcases where people could view the items in person, with orders being delivered to their homes.” I understand, from this description that there will be real items to see, touch, feel, plus AR to allow people to see how couches, stoves and credenzas will look in their homes. To stay ahead of Amazon, which is not easy, retailers have to do it first and better — a tall order we hope others can do.

AR can be a great approach to any segment where the item being sold benefits from the shopper visualizing it in their home. This works well for furniture items, but not necessarily for appliances. VR works well for merchandise for which shoppers want to see deeper product details, which should work well for appliances. VR also has potential for delivering a virtual store that shows you all the retailer’s products. Both of these make sense for Amazon but it’s not clear VR is solving a problem for shoppers as opposed to the retailer. AR on the other hand can definitely solve a challenge for shoppers and so may have the greater potential. Amazon is showing us that they’re willing to experiment in ways most retailers either don’t or can’t to innovate successfully. Plus they continue to demonstrate that they can generate enough buzz to keep us all talking about them.

Frank I’m not sure where you get the thought that Amazon is new to this concept or that they will succeed. What is a success at Amazon is their PR department, where I am sure the leaks come from that make it to The New York Times, another valuable retail publication. This concept will do well then crash back to reality as people see what they cannot have with concept layouts and just comeback to reality. Lowe’s will experience the same. Concepting layouts then costing them out is where the reality smacks the VR technology out of left field. Have fun, draw in some Millennials. But like Bob says, you need smart humans when it comes to appliances and they must really know their hardware. My read on AR is that it has three to five years to go before it finds a spot to bring real value to retail and becomes a normal thing to see. In the mean time — leave it in the gaming arena along with many of the stupid robots… Read more »
0
|
0
-   Share

Amazon isn’t a one trick pony — they are also watching closely their losses in shipping. So while having an AR showroom is clever, I think the other play is their ability to get inventory closer to more people more of the time to drive down shipping costs and make same-day or overnight the norm.

I also applaud their attitude towards experimentation, but this category is a tough one. If they have do indeed have it tied to physical showrooms, I could see it working. But appliances and furniture are extremely tactile purchases that we touch and use often. People want to be sure that they are comfortable and feel right for their bodies and daily needs. They are also high consideration re: the remorse factor — if you get a choice wrong here, it’s a lot of pain and time expense to trade it out.

Look at PIRCH. Their wild success is built on the high touch that they provide to an otherwise sterile category — all the way down to the white glove installation. How on earth could Amazon come close to this?

Whether Amazon succeeds in an entirely AR-driven showroom or store will largely depend on how well this type of buying experience is integrated into its existing channels, at least to begin with. How consumers navigate and engage AR though the mobile website or Amazon app seem to be the most logical places to start. So having insight as to how shoppers shop for furniture and other categories and identifying the right points in the journey for this type of interaction will be crucial in its uptake.

While I think Amazon is definitely early on the trend, that’s usually where true trends start. AR technology has improved dramatically over the last couple of years which means that something that was once more of a novelty is now incredibly viable in consumer applications.

I honestly think it will be hard for retailers like Lowe’s to stay ahead of Amazon, instead I think retailers should be looking at what Amazon is doing, how they change, and learning from Amazon’s own experiences.

One thing that is certain is that if Amazon thinks AR has a bright future in-store, then retailers that aren’t starting to embrace this change this year will likely get left behind. With any new innovative technology it takes six months to a year to really get things running smoothly, there’s a real curve and many retailers are used to looking for something that offers “instant” results.

With innovation you rarely get instant results, instead you get gradual improvements over time … which in the end leads to very meaningful results, just not instant.

Braintrust
"I applaud Amazon for its forward thinking but this type of showroom/store would be challenged to attract shoppers in the market to buy appliances."

"Of course Amazon will succeed with this new showroom/store. We see history repeating itself all over again."

"Definitely NOT a slam dunk on furniture sales. You have to applaud them on driving new tech to continually try to change the game. "