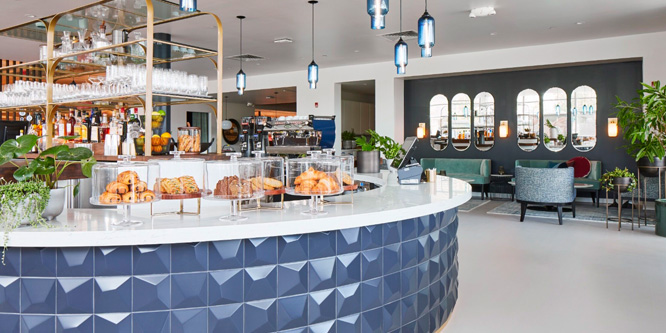 Crate and Barrel is the latest chain to open an in-store restaurant in hopes that shoppers will stop and stay a while.

The home furnishings retailer, which has more than 105 stores nationwide, opened its first restaurant in Oakbrook Center in the Chicago suburbs, according to Eater. The indoor/outdoor restaurant seats 75 and is called The Table at Crate. It was launched in partnership with Cornerstone Restaurant Group, the same restaurant group that has partnered with Michael Jordan on his branded steakhouses. The location features a mostly vegetable-based, foodie-focused menu and cocktail selection. The restaurant has two floors and showcases Crate and Barrel products throughout.

In-store restaurants have grown in popularity as retailers have sought ways to meet customers’ desire for retail experiences that extend beyond shopping.

Also in home furnishings, RH, formerly Restoration Hardware, has launched restaurants in its New York City flagship, its Napa Valley “luxury compound” and in other high-end hospitality-focused store locations, including its Chicago location.

In fact, there was some legal controversy between RH and Crate and Barrel in the years-long ramp-up to the latter’s recent in-store restaurant launch.

Elsewhere in home furnishings there is, of course, the notable example of Swedish furniture chain IKEA, which has made an in-store restaurant a centerpiece of its store experience since 1956 (13 years after the chain first opened its doors). IKEA’s version is, however, closer to a food court than a fancy restaurant.

At the same time as it has opened its first restaurant concept, Crate and Barrel has been expanding its brand portfolio. In June, the retailer acquired home décor, entertainment and gift brand Hudson Grace, according to HFN Digital. The brand currently has five standalone stores. Crate and Barrel intends to boost the brand’s digital presence and expand it into niche markets.

DISCUSSION QUESTIONS: What makes an in-store restaurant a success for a given retail chain or area of retail? Do you think The Table at Crate will be a successful addition to Crate and Barrel?

Please practice The RetailWire Golden Rule when submitting your comments.
Braintrust
"Someone is much more likely to make a major furniture purchase if their spouse is there as well. That’s what makes the restaurant concept so genius."

"Restaurants have one of the highest failure rates for any business in the U.S. It remains to be seen if Crate and Barrel can pull it off."

"Clearly Crate & Barrel isn’t alone when it comes to the retail-restaurant idea. It keeps being done for a reason."

Think about it — someone is much more likely to make a major furniture purchase if their spouse is there as well. That’s what makes the restaurant concept so genius. Come in, have a look, consider your purchase over a meal, buy, and go. I’ll be surprised if this isn’t a hit.

Crate and Barrel is one of many examples and it is not a new concept. Bloomingdale’s and other department stores have had popular restaurants in their stores. Barneys New York has what has always looked to be a very successful restaurant in the NYC location. The optimal success is that the restaurant makes money and its patrons shop at the store when they go for lunch there. Keep in mind that we are now “over-restauranted” and new in-store restaurants will be competing for the same dollars with existing street-side restaurants.

There is no secret recipe for success here. IKEA’s food court works because the stores are generally destinations and people often travel a pretty far distance to get to one and, given the size of the stores, after you’ve been shopping for a while you need caloric intake just to keep you going. It’s either the food court or pack your own lunch. As to The Table, the devil is in the execution. I personally am not overly fond of eating in a store, but clearly lots of folks are — but only if the food is well prepared, presented well, priced right, and the ambiance is inviting. So for now, I’m suspending judgement on The Table.

Anything to attract, engage and entertain your guests is bound to make new fans of your brand. Considering that a significant part of the shopping journey is about the experience, opening The Table at Crate is simply a brilliant move by the Crate and Barrel brand.

The restaurant and shopping experience has become a quick win, especially for lifestyle, experiential-focused retailers such as Restoration Hardware, Tiffany’s, Armani and many others. This is the kind of winning formula that retailers such as Barnes & Noble should consider. Keep your customers happy, along with their significant others and kids, and they might just leave with some products.

Like any restaurant – the proper combination of good food, good service, and good ambiance defines success. Expectations are different if in a retail environment like Crate and Barrel as the purpose is to drive traffic and highlight their own kitchenwares in use. I believe the format is a good fit for a restaurant addition – they just have to get the food, service and ambiance right.

Sometimes it is overlooked that FOOD is the #1 necessity for survival, as far as commerce is concerned. And of course beverages are even more important, although “free” water is widely available to the public. OK, so air is even more important than water and food, but nobody has cornered the market on that yet.

This is significant not only for the developments in this discussion, but THE VERY SAME factors drove Walmart to the pole position in global retailing, really beginning in the ’80s and ’90s, with the massive shift to supercenters – WAY beyond Kmart – with serious supermarkets integrated into Walmart’s massive general merchandising program.

Air-water-food drives all human life, and naturally dominates commerce. It’s not a fact obviously recognized even by those who have inherited the century old supermarket business.

ABC Carpet and Home in NYC has two restaurants on premises. This is a good idea where Crate has the space. I hope they have some fun with the process, like leaving price tags on the table and chairs and showcasing the tabletops they sell.

I found it interesting that this story came out the same day as Progressive Grocer published an article titled “How Grocers Can Reap Benefits, Dodge Pitfalls of In-Store Restaurants.” The concept of using food to attract customers and encourage them to make purchases is not new nor are the issues and pitfalls that come with doing so.

Restaurants have one of the highest failure rates for any business in the U.S. It remains to be seen if Crate and Barrel can pull it off. I will have to check it out the next time I am in Oakbrook.

Having a restaurant in Crate and Barrel serves both to highlight the occasion-based usage of their merchandise and gets people to linger. Both are valuable benefits to the brand that should serve them well. Placing items in the context of the meal occasion can help drive purchase as shoppers/diners will be more familiar with items and have already “tried” them.

If The Table is well executed, it can be a great way to bring Crate and Barrel’s lifestyle vision to life.

This is yet another example of creating an experience within the shop to increase or hold customer numbers. In Crate & Barrel’s case, it makes perfect sense as they can showcase their products at the same time as providing that experience.

However, retail brands do need to be sure that their offering reflects and supports the brand image they wish to portray. The quality has to match the customer aspirations or exceed it. The cleanliness and presentation similarly has to represent the brand and the value or price needs to be in line with the brand or people will feel ripped off. If a retailer can get all these things right, then this is a great move and can help them survive and prosper. It’s not easy to move into a space that you do not understand and make it work.

A key question is how will the foodservice industry react to all these new competitors? Online hits retailers, retailers hit restaurants, what comes next?

Clearly Crate & Barrel isn’t alone when it comes to the retail-restaurant idea. It keeps being done for a reason. On the plus side, it gives people a reason to come to Crate & Barrel stores outside of wanting to actually buy some furniture, but it’s also an ideal setting for trying before you buy. If you have your eye on a table then why not test it out and have a nice time doing so? But on the flipside, to really work as a restaurant it needs to feel like you’re not eating in a store that’s had a few tables thrown into it. It needs to be worthy of being the customer’s choice. That means the food, service and ambiance also all have to be up to scratch.

Operating a restaurant well is not the same as running a store well and Crate & Barrel now needs to spin both plates.

This is a brilliant idea. Having an in-store restaurant offers the ability to add to the theatre of retail. It offers an entertainment option encouraging customers to spend more time and have a higher commitment to the brand. At The Table at Crate they offer a menu that should appeal to their base customer and will likely drive additional business.

Braintrust
"Someone is much more likely to make a major furniture purchase if their spouse is there as well. That’s what makes the restaurant concept so genius."

"Restaurants have one of the highest failure rates for any business in the U.S. It remains to be seen if Crate and Barrel can pull it off."

"Clearly Crate & Barrel isn’t alone when it comes to the retail-restaurant idea. It keeps being done for a reason."