Did Apple get it right by skipping Black Friday deals? 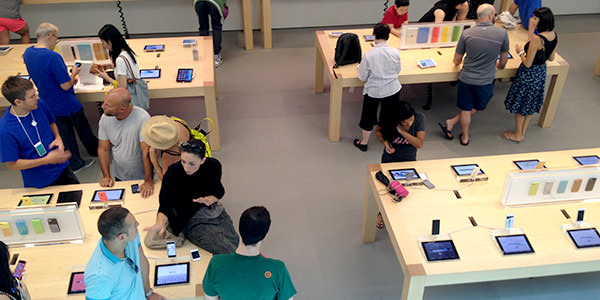 Apple Stores surprised many by not holding any Black Friday deals. Instead, the doorbusters for Apple’s lineup of products took place at third-party sellers.

In an interview at Fast Company’s Innovation Festival on Nov. 9, Angela Ahrendts, Apple’s SVP of retail and online stores, said Apple had backed away from Black Friday sales in 2014 for the sake of employees. She said, "Being good to your employees will always be good for business."

Why they decided to forego any specials or extend hours for Black Friday 2015 wasn’t clear. Writing for The Verge, Ross Miller suspected it might be because Black Friday has become less of a major selling day.

But many felt that Apple Stores were being positioned more as showrooms than in the past.

"Apple’s vision for its retail stores is for them to be calm and peaceful places," wrote Ben Lovejoy for 9to5Mac. "The reality in the bigger Apple Stores at peak times is very far removed from this — packed with so many people you can scarcely move, let alone get a decent chunk of time to play with a product or have a relaxed conversation with a member of staff."

He also felt the move pushed more sales online as part of an overall emphasis to merge online and offline channels.

Moreover, Apple appears more open to allowing discounting and other incentives to drive sales. On Black Friday, Target offered gift cards up to $150 with the purchase of an iPad Air or Air 2 and Best Buy discounted the iPad Air 2 64GB by $100.

"If you just look at Target and Best Buy as two examples, and use them as a barometer, the fact is, they’re really embracing these doorbusters as a sign that demand is pretty healthy here," Mr. Munster said. "So, so far, so good."

What do you think of Apple’s decision to tone down discounts in its retail stores over the Black Friday weekend while allowing more discounting at third-party sellers? Do you agree that Apple Stores are being used more as showrooms at this point?

Please practice The RetailWire Golden Rule when submitting your comments.
Braintrust
"There are other types of special Black Friday promotions that Apple could have considered. I would have created special content that is unlocked when you walk into an Apple Store for the first holiday weekend."

"Why should Apple discount? Its brand is strong and in-demand and all it can do is lower margins, not build traffic. As to third party sellers, allowing them to discount does build Apple’s brand long-term, so no harm, no foul."

"Good move on their part. You don’t see Black Friday sales at Burberry, Tiffany’s or Chanel stores. Apple is making its store to be the showroom for the Apple lifestyle experience, where you can pick up what you need now or order it online later."

18 Comments on "Did Apple get it right by skipping Black Friday deals?"

There is no need for Apple to offer deals to lure consumers into its stores. As the article points out, Apple stores are already crowded — why make them downright uncomfortable? Apple got it right by allowing more discounting at third-party sellers. My in-laws took advantage of the sale at Best Buy to upgrade their iPhones. And since the sale items at these retailers were limited to stock on-hand, they soon sold out and people were paying full price for desired Apple products.

Apple showed the world what the brick-and-mortar retail experience can be and should be in the digital era. That success is now being translated into the “shop-n-shop” concept. This allows Apple to reach many more people with that same experience that in turn translates to selling more product(s). The “shop-n-shop” concept augmented by automated inventory and consignment processes and technology is the future of the “new/old” retail.

There are other types of special Black Friday promotions that Apple could have considered. I would have created special content (e.g., an album) that is unlocked when you walk into an Apple Store for the first holiday weekend (potentially then extended).

Why would Apple need to have deals on Black Friday or any other day? Their stores are busy most of the time and special draws are not something they need to do. It must be great not to have to do anything special to lure traffic, and the business continues to grow despite it. Eat your hearts out, competitors.

Apple Stores can be whatever they want and open whenever they want — because they can (for me, they are always busy and frenetic and deferential, no matter what the day or time or season).

And I never think of Apple for its discounts or promotions. One of the elite brands at the top that exist on their perceived value. Apple must really put the bite on third-party sellers so they (the third-party sellers) could take the hit of making little, if any, profit on products they sold. Or possibly these merchants could use Apple products as an expensive loss-leader, worthwhile if customers who came for the Apples stuck around and snacked on (and bought) other products while they were there.

Why should Apple discount? Its brand is strong and in-demand and all it can do is lower margins, not build traffic. As to third party sellers, allowing them to discount does build Apple’s brand long-term, so no harm, no foul. As to the showroom idea, I guess that’s right, if you assume a showroom with a hyper-cool factor.

All I can say is that the Apple Stores I went by this weekend were packed. They did not need any promotion to make things happen.

Apple is a smart operator — leveraging its retail channel partners, its own online presence and its stores in a way that best suits the consumers. Using retail channel partners helps fund promotions and scale, while the Apple Stores continue to be compelling destinations for customers to research, touch, learn and buy products.

Why give away margin dollars when the balance of the selling model is compelling? Brand Apple has powerful and natural draw. As long as Apple continues to innovate and release new compelling products that are unique and relevant and sell them in a compelling experience, it’s the winning brand.

Johnson was right at J.C. Penney, unfortunately for him J.C. Penney doesn’t sell unique and relevant product with a compelling experience. Apple remains in the most enviable position in retail.

As Steve Jobs might have said, “retail ain’t for sissies!”

It makes no sense to divert sales to non company stores unless there are supply issues or an active valuation of the necessity of having the stores for a purpose other than product announcement and differentiation. In any event the company has stayed their course of marching to the beat of a different drum with little or no regard for market expectations.

Good move on their part. You don’t see Black Friday sales at Burberry, Tiffany’s or Chanel stores. Apple is making its store to be the showroom for the Apple lifestyle experience, where you can pick up what you need now or order it online later. Does Apple need the long lines around the block in front of their stores any more and people who buy it to resell down the block? No, for that, it is now the role of the latest Target fashion collaboration to fill that void. 🙂

When you have True Brand Loyalty, the need for ANY discounts becomes obsolete. ‘Nuf said.

Apple (and any other top-of-the-heap brand) does not need a Black Friday deal to drive traffic at holiday time. I think its iTunes gift card offers are almost superfluous, but maybe they figure they make them seem less arrogant. Besides, it’s good to get users into the download habit.

Apple tolerates gift-card-with-purchase holiday specials by re-sellers like Target and Best Buy, but in those instances, the retailer appears to take all the margin hit and there is no list-price erosion. Pretty smart. I’d do the same thing if my brand was in the driver’s seat.

One question: Does anybody here know if Apple provides promotional funds to retailers? I checked quickly but didn’t find an answer.

This is a great strategy to maintain the Apple Brand as a premium brand, while focusing on their employees. Yes, Apple Stores are a destination showroom, rather than a retail outlet, since there are thousands of other stores which carry and sell Apple products. Apple is the manufacturer, and doesn’t really want to compete at retail with their dealers.

I love how Ms. Ahrendts connected the decision to the employee experience. Why add more stress in the holidays when the impact is going to be minimal to your overall holiday sales.

Same for REI. I’m sure employees loved being off on Black Friday, and again the impact on business was minimal.

As a matter of fact, a lot more retailers would be more profitable removing themselves from the madness. If anything, move it online where the cost of business is a lot less.

Apple’s stores have always been showroom stores, they just do it so well they rake in $4500 a square foot! Given those well published numbers, you’d think other retailers would take note of this model, which increases associate interaction, elevates the product and makes for a great looking brand experience. Besides, regardless of another player discounting their goods, most people who own Apple or are Apple fans know good and well that when it comes to expertise, they’re going to wind up in an Apple store. Win-Win.

It would seem discounting in their own stores would impact brand image as well as squeeze margins. People know traditional retailers will discount, so there is not an image issue there. Additionally, the margin squeeze is at least partially shared if not entirely subsidized by the retail partner. Net, good margin protection.

Apple had no need to discount in their own retail stores. The concept of the Apple Store was devised primarily as a showroom. In addition to serving as a place for Apple fans to try new product, the Apple Store is for Apple owners to get hands on support with their devices. For that purpose, the Apple Store is ingenious. Selling additional units via their brick and mortar locations is simply icing on the cake. Apple has no need to eat into margins by discounting their products in store on Black Friday or any other day of the year for that matter.

Braintrust
"There are other types of special Black Friday promotions that Apple could have considered. I would have created special content that is unlocked when you walk into an Apple Store for the first holiday weekend."

"Why should Apple discount? Its brand is strong and in-demand and all it can do is lower margins, not build traffic. As to third party sellers, allowing them to discount does build Apple’s brand long-term, so no harm, no foul."

"Good move on their part. You don’t see Black Friday sales at Burberry, Tiffany’s or Chanel stores. Apple is making its store to be the showroom for the Apple lifestyle experience, where you can pick up what you need now or order it online later."