Did Trader Joe’s lower prices to thwart 365 by Whole Foods? 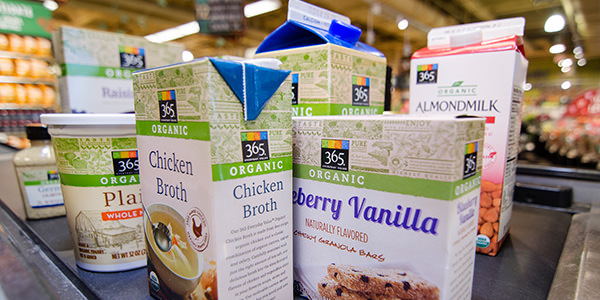 Recent price checks by Deutsche Bank show that there really is no comparison between Trader Joe’s and Whole Foods.

In a market basket comparison of 77 similar items, Trader Joe’s was 21 percent lower than Whole Foods, consistently offering greater savings on both perishables and non-perishables. Trader Joe’s had the lower price of the two on 78 percent of items checked, while 13 percent were the same price. Whole Foods only had an edge on nine percent of the SKUs checked.

The disparity in private label pricing raises a couple of possibilities. Firstly, that Whole Foods reduced the price investments it has made in private label in an effort to bolster its bottom line. The second — the one seen as more likely by Deutsche Bank — is that Trader Joe’s lowered prices on a large number of items to gain an edge in head-to-head comparisons.

Trader Joe’s certainly has motive. It seems logical that management would choose to preemptively lower prices in an effort to thwart the new small box concept, 365 by Whole Foods, being developed by its rival. It has been widely assumed that 365 stores would compete directly with Trader Joe’s because of plans by Whole Foods to emphasize its private label. Of course, that was at a time when price checks showed there was an even match in the comparison.

What is your analysis of the pricing disparity between Trader Joe’s and Whole Foods, particularly as it relates to private label? How might this news affect what Whole Foods does with its new 365 by Whole Foods concept?

Please practice The RetailWire Golden Rule when submitting your comments.
Braintrust
"By definition, the retailer has far more dynamic control of all aspects of their private label, from cost to availability and marketing expenses. Why not use your inherent advantage to preemptively compete with your current and future competitors?"

11 Comments on "Did Trader Joe’s lower prices to thwart 365 by Whole Foods?"

I don’t think Trader Joe’s suddenly lowered prices. They have always been lower. Deutsche Bank is just trying to take credit for this miraculous discovery. It’s not really news, therefore it will not affect the new 365 concept.

If Deutsche Bank compared prices at Aldi and Walmart, they would find that Aldi is much lower. Then they would immediately alert the media and tell us Walmart is doomed.

Reducing price subsidies for private-label brands is a very reasonable competitive strategy for Trader Joe’s or any retailer. By definition, the retailer has far more dynamic control of all aspects of their private label, from cost to availability and marketing expenses. Why not use your inherent advantage to preemptively compete with your current and future competitors?

This strategy won’t affect Whole Foods’ 365 concept other than that the pricing competition will benefit each of their shoppers.

Trader Joe’s has always been lower priced on most grocery items.

Price checks are an important aspect of understanding a retailer’s price position in the marketplace and particularly against key competitors. However, without knowing two additional knowledge points — the shopper’s price perception and the importance of price to these shoppers — the picture is incomplete.

If shopper attitudinal feed back indicates that all other things are equal, price is a choice determinate between Whole Foods and Trader Joe’s, AND shopper’s perception is in sync with the reality of a price check, then Whole Foods and their new 365 concept may have some pricing issues to resolve.

On the other hand, if shopper perceptions show that Trader Joe’s actual pricing does not translate into enhanced price perception over Whole Foods, it is Trader Joe’s that has the issue as they are unnecessarily yielding margin without credit from the consumer for doing so.

This is really a non-issue. Pricing disparity between private-label goods is not viewed by the consumer (who frequently doesn’t understand or shop specifically for a private label at each store, let alone compare these) as a reason to shop at a store. In other words, they are not destination products in this category. Pricing disparity between Trader Joe’s and Whole Foods should be expected, and Trader Joe’s would be the more competitive on pricing, as it usually is.

These are two giants in the food business, but Trader Joe’s now and always will have the upper hand in better pricing. Sales per square foot at Trader Joe’s is insane and both stores have loyal followers, but Whole Foods’ reputation for high prices isn’t going to sway Trader Joe’s shoppers away from their store.

When it comes to private label, no one does it better than Trader Joe’s and Aldi. If it came to a pricing and quality war, they would win.

The potential sweet spot for the 365 concept and the key differentiator with TJ’s would be prepared/ready-to-eat foods, not unlike the bfresh concept from Ahold. No space for tattoo shops…. TJ’s brand positioning is high quality/decent prices. Like Walmart’s perception of being the low price leader, TJ’s isn’t always the provider of great priced items, although as this study indicates, they are selectively lowering prices on some goods. Like WF, TJ’s have loss leader pricing on some items such as milk and eggs. But I don’t think WF is ever seen as being a low price provider. The thing about TJ’s is that they are a lot more selective on location decisions than is WF. That’s why the income in an avg. TJ RTA is up to 3x that of a typical WF store. So that gives WF an opportunity to locate stores where TJ is normally less interested, and where there is a high propensity to purchase prepared foods. E.g., a story in the Tacoma News Tribune on the Main & Vine store says… Read more »
0
|
0
-   Share

Trader Joe’s and Whole Foods have different brand images, so the disparity makes sense. I’ve heard Whole Foods called “Whole Paycheck” for a reason. Being competitive on price against Trade Joe’s makes more sense for their 365 concept, so let’s see if they’ll be able to give Trader Joe’s a run for their money.

It will take years for 365 stores to show up in all of Trader Joe’s markets and lowering prices this early seems like unnecessary losses. I would expect that this move (if it is a move at all) is no more a reaction to 365 than any other competitors.

Braintrust
"By definition, the retailer has far more dynamic control of all aspects of their private label, from cost to availability and marketing expenses. Why not use your inherent advantage to preemptively compete with your current and future competitors?"