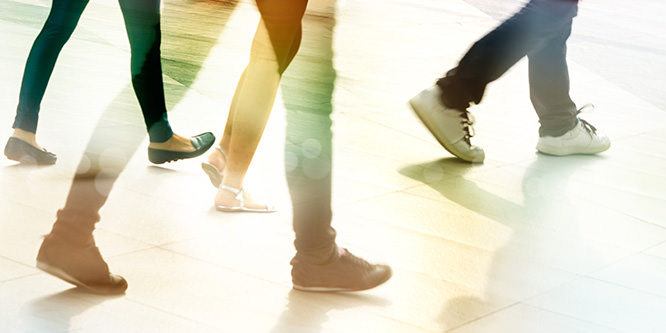 Walt Disney was recently awarded a patent that describes identifying and tracking its visitors based on their footwear in order to provide customers with customized experiences.

As a guest enters a theme park, cameras would capture their shoe’s color scheme as well as brand and model. Further, sensors placed in the ground would recognize and store shoe size and tread pattern. Individuals could then be recognized by other cameras and sensors as they move about the park.

According to the patent, amusements parks, theme parks other sporting and entertainment venues would benefit from a better understanding of guests’ footpaths. For theme parks this would include understanding the “common guest paths from ride to ride.”

But the patent also suggests that the guest’s personal data (name, hometown, interests, etc.) could be linked to the footwear data to customize the individual’s experience. The patent states, “Recognizing individual guests or providing a method for an individual to register at certain rides or other attractions allows the amusement park to tailor certain experiences for the guest.” 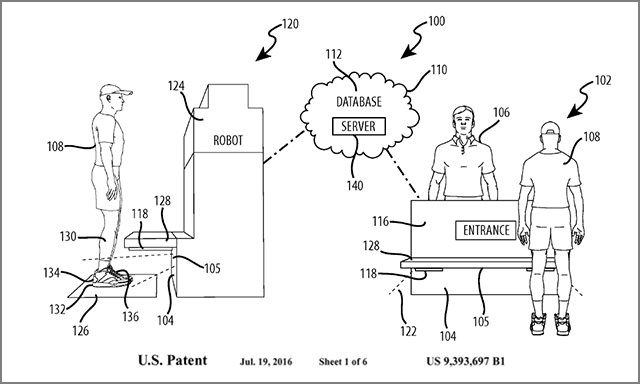 Perhaps the most interesting argument in the patent is that tracking footwear is less invasive than other current methods, even when the individual knows they’re being tracked.

The cameras and sensors at the entrance would be “angled towards the ground” and consequently “easier to conceal” from guests. Similarly, the devices tracking individuals around the park would be “out of a person’s line of sight.”

By comparison, retinal and fingerprint identification methods “are obtrusive and some guests may not feel comfortable providing this type of biometric information to a third party.”

Apparel recognition systems likewise “require cameras that are visible to the person” and may be less reliable as people may take off a hat, sunglasses or sweater during their stay at the park.

DISCUSSION QUESTIONS: Does tracking customers by footwear offer advantages over smartphones and other recognition methods? Are other tracking technologies too invasive and obtrusive for the majority of customers to opt into?

Please practice The RetailWire Golden Rule when submitting your comments.
Braintrust
"This has a 'creep' factor that seems at odds with the Disney brand."

For many years we’ve been hearing about customer tracking technologies that may improve the customer experience. I’m looking forward to reading a story that shows how one of them actually does.

I’m with Cathy that the promise of customer tracking hasn’t lived up to expectations as of yet; however, good retailers are using this information on the back-end to help with store planning, assortment, staffing, etc. The question of privacy is a value exchange and customers simply haven’t seen enough value yet on the front-end to continually be giving up more and more information. We’re still in the early days of a shift as more retailers are working on more meaningful personalization to justify the customer information they continue to hold.

Sorry, but this is too funny not to comment on where this could lead. Disney partners with shoe retailers and shoe brands, and the robots shown in the diagram start to tell patrons that their tread pattern is wearing thin, or that they are really out of step with the latest shoe trends.

Just because you can do something doesn’t mean you should. At least smartphone users can opt out of location-based tracking. This has a “creep” factor that seems at odds with the Disney brand.

Wow! This is fascinating on many levels. For all of the reasons mentioned in the article, I can see this working for both the guest and Disney. Disney gets data and creates a better guest experience as a result. However, this is just the tip of the iceberg. The data that can come from this may allow for a much better understanding of consumer/guest behavior on levels that they haven’t even thought of yet. I’m excited to see what happens when this technology goes live.

This is a backward move for Disney and to invest in this footwear tracking infrastructure seems silly. I like the Magic Band RFID bracelet and appreciate its ease of use from Disney properties through the parks. Moving on to an IoT integration with proprietary smartphone technologies would suit Disney better.

Cameras may be less intrusive and more difficult for consumers to see. The article did not say whether consumers would be told they are being tracked or would be giving permission to be tracked. If they are not told and/or have not given permission, they are likely to be upset if they find out and then Disney would not be the happiest place on earth for them. What kind of personalized experience would they be offered to feel OK about being tracked? What about the thousands of visitors from other countries who are even more concerned about privacy? Implementation of this plan needs to be well planned.

If the guest has to register or opt in then it’s not invasive anymore. But I agree with Cathy Hotka — to what extent do retailers realistically enhance the customer experience with this or other tracking technology?

I’m quite torn. On the one hand, this approach would solve a major problem with most tracking technology — shoes are far less personal than other methods. And that would make it more acceptable.

At the same time, we have yet to see an example where this kind of tracking delivers much insight or power to personalize. And it would be creepy for Disney to do it.

Online what I’ve decided is the hype about tracking consumers to offer them relevant advertising is really the other way around. Advertisers often lurk in the background waiting for consumers to do something relevant to the advertiser then pound those consumers with ads that benefit the company.

Can a company like Disney break through with useful personalization? I doubt it.

Interesting to read everyone’s comments and how opposing they are to each other. Communicating the intent of customer tracking to the customers is always a helpful component of any program like this. If the customer believes that this will be beneficial to them, the “creep” factor tends to diminish. Remember, there was a dance club in Spain several years ago that offered to implant RFID tags in patrons’ shoulders in return for compelling promotions. I think tracking footwear is nowhere near as intrusive as that example, right?

It’s fascinating to watch all the different technologies for tracking traffic … I can’t wait to not only see what’s next, but tangible examples of how it helps operators!

These kinds of developments usually revolve around three things: 1. privacy; 2. technical practicality; 3. relevance to business. “Privacy” is a shrouded football, kicked around for various less-than-insightful reasons. The idea that somehow you deserve some kind of privacy while in a public place is absurd. Hey! You can be SEEN in public, by anyone and everyone. Scott McNealy of Sun Microsystems, a dozen years ago commented, “Privacy? You have no privacy. Get over it!” (Unless you can actively hide something – and that wouldn’t be your “person” in public.) “Technical practicality” just begins with deployment. And mostly, anything that involves a massive amount of “detectors” is going to price itself out of practicality, very soon. HOWEVER, if you look at what a smartphone can detect — vision, sound plus a variety of electronic emanations — it is obvious that what is technically practical partially depends on the “vision” of the developers and their access to the cutting edge of technology. None of this matters when, as is often the case, there is a vast… Read more »
0
|
-1
-   Share

So … monitoring people in stealthy ways will make them feel better than if the see the cameras … This is so silly it might be easy to dismiss, that is if you can suspend disbelief for a moment and forget to remember that we wouldn’t be commenting on this if, in fact, a whole bunch of people weren’t taking it somewhat seriously. Is tracking my feet somehow less invasive than tracking my face just because it’s harder for me to catch you? Is deception therefore more palatable than transparency? Seriously, Dick is right, the “creep factor” here is almost off the charts. I have this image of the Seven Dwarfs holed up together in some subterranean bunker pouring over spreadsheets of footprints, and comparing purchasing behavior of Nike wearers with those shod in Jimmy Choos. Will the Birkenstock Brigade navigate Fantasyland differently than the cohorts of Cole Haan? Will guests fall victim to ankle profiling? The possibilities are both endless and — in some Orwellian way — terrifying. And, to stay on the Orwellian… Read more »
1
|
-1
-   Share

My question is really, what’s in it for me? How am I going to enjoy my visit/experience more because my shoes are being tracked? I read what is being promoted. But is that the answer? I doubt it. Maybe my paranoia is coming out. Enough of this following me around technology. I am not lost … yet.

Wearables offer the benefits of identity recognition, but if detection and recognition are the objective, the identifier has to be unique. Footwear recognition seems more quirky than creepy, so if that method is used, facial detection which can capture presence, notice and dwell and anonymously assign gender, age range and skin tone offers a better approach.

I’m dubious this can ever work — it sounds very much like those old “Five-O” episodes where the team miraculously had access to data on every car color and typewriter sold — but even if it could, would we (the public) want it? I think not. Whatever imagined advantage there may be from Disney knowing my “path from ride to ride” — yeah, right — is offset by my discomfort at their knowing that (or more particularly my knowing they know it).

Just the next step in someone or something being able to know where you are and what you are doing every hour of every day. Wonder what will be next?

I think/know I am getting paranoid.

This is one of those patent plays that I think is more for the intellectual property portfolio than anything else. The practical implementation of this at a large scale would cause so many privacy issues. The only thing I can think of is if they decide to do a promotion with shoemaker for some sort of contest linked to geo tagging inside the park. Think Pokemon Go mixed with Four Square/Swarm using branded shoes….

Using technology to track information about customers in retail is intriguing to me. It’s through the collection of data that we’re able to better serve our customers and meet their needs. The interesting thing is that customers are reluctant to allow brick and mortar stores to gather information about them but when that same customer goes online to shop, they’re willing to provide all sorts of personal information. The online site is able to track their every click and purchase which allows the online retailer to better personalize the shopping experience for the customer. Meanwhile in the brick and mortar stores the customer doesn’t even want to even give you their zip code. So why is it more “creepy” to gather information from a customer in a store rather than online?

Braintrust
"This has a 'creep' factor that seems at odds with the Disney brand."