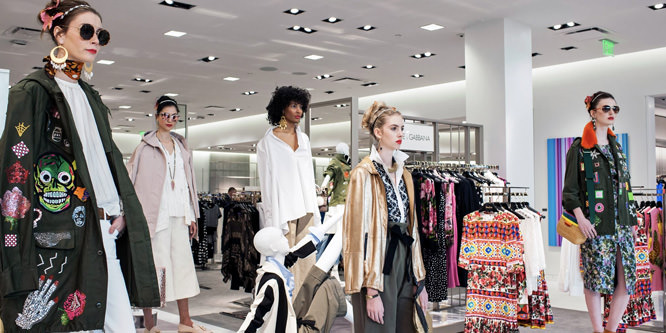 Hudson’s Bay Company, unable to conclude a deal to acquire Macy’s, Inc., now has its sights set on the Neiman Marcus Group, according to reports.

Neiman Marcus has been exploring strategic alternatives coming off six straight quarters of declining sales while dealing with $5 billion in debt. A deal with Hudson’s Bay would help cut costs for Neiman Marcus, which presumably, would be in a better position to achieve a turnaround.

Hudson’s Bay, the owner of its namesake Canadian department store chain as well as Lord & Taylor, Saks Fifth Avenue and German department store chain Galeria Kaufhof, will need to be creative to make a deal for Neiman Marcus work. It’s likely, according to a Wall Street Journal report, that the current owners of Neiman Marcus, Ares Management and Canadian Pension Plan Investment Board, will end up with a stake in the combined company should a deal be reached.

“Customers are making fewer trips to the store and the mall and more trips to the web. They want newness, exclusivity and the best price,” Ms. Katz said. “Driven by these expectations, and thanks to the information available to them on the web, more and more we are seeing our customers shop multiple stores or websites, not just ours.”

Neiman Marcus’s problems integrating new systems, such as inventory tracking, have negatively affected revenues, according to the company’s CEO.

“In a tougher luxury environment, you need more scale to do things like data analysis, marketing and e-commerce,” he told the Journal. “There are substantial synergies between these companies and it makes a lot of sense for them to combine.”

Mark Cohen, the director of retail studies at Columbia Business School, doesn’t see the point of a Hudson’s Bay and Neiman Marcus deal.

“I look at this just as moving the deck chairs around on the proverbial Titanic,” he told The New York Times.

Please practice The RetailWire Golden Rule when submitting your comments.
Braintrust
"Where the default mindset in the industry has been defense, HBC has been all offense over the last few years. It is refreshing to see in this space. "

"Neiman will fit in very well with the other properties and synergies will occur on the digital side especially."

"The big retail story in 2017 is going to be leveraging all that data."

12 Comments on "Does Neiman Marcus make sense for Hudson’s Bay?"

I’ll give the question a qualified “yes” because an acquisition of Neiman Marcus makes more sense than buying Macy’s. It’s not only more financial feasible for Hudson’s Bay but it’s a brand in the company’s sweet spot of luxury retail.

That being said, it would take a lot of back-office economies of scale to make this work without disrupting the distinct brand positions of Neiman vs. Saks vs. Lord & Taylor. The Macy’s-May merger isn’t an exact parallel but the mashup of several separate brands turned the company into a homogeneous (and unmemorable) place to shop. An acquisition may allow each of these luxury stores to sharpen its own identity.

Scale in analytics and demographic loyalty creation is becoming as important as scale in operational efficiencies. As one of the world’s longest serving retailers Hudson’s Bay has weathered storms by staying relevant, brand building and providing a worthy shopping experience, most recently with more banners. Acquisitions with enough upside make sense. What is key to The Bay attitude appears to be that the board is not an acquisition-focused board, but the directors are focused on what serves consumers while also delivering shareholder value. Too many birds and executive suits are focused on M&A, with too little of their attention paid to business building.

I know that it doesn’t necessarily directly address the question, but can we discuss for a minute how aggressive HBC has been to build out their corner of retail? Where the default mindset in the industry has been defense, HBC has been all offense over the last few years. It is refreshing to see in this space. They would do very well with Neiman Marcus. They are solid operators who know this world well and there are two key reasons why this acquisition could work. First, with all of their other retail properties and buying power HBC now has (and is growing), there are economies of scale. Second, HBC can make some hard cuts and decisions to streamline Neiman Marcus in a way that Neiman Marcus itself can’t at the moment.

This is beginning to sound a lot like the old Federated story. Being a part of the Federated Systems Group at its inception, we were able to provide much value due to the synergies between all the department stores. So yes there is likely value in this deal, but is this going to solve the problems of the department stores? Perhaps it will give them a little more leeway to make the right investments for a turnaround.

I’ve been impressed with what Richard Baker and the folks at NRDC have done with the banners they’ve acquired so far, so I have no reason to believe they won’t be able to revitalize Neiman Marcus. One of the hidden gems in the NRDC/Hudson’s Bay portfolio is the expanding number of digital properties they support, including the Guilt Group. Neiman will fit in very well with the other properties and synergies will occur on the digital side especially.

The acquisition of Neiman Marcus by the Hudson’s Bay company makes perfect sense, as the brand is far more complementary than any potential Macy’s transaction. HBC has historically embraced innovation and change and has well-established economies of scale, shared services, IT, MIO, supply chain and an infrastructure model in place to add an additional brand to their already impressive portfolio.

Additionally, they have a mature synergistic organization that enables commonalities from a business process perspective while enabling and empowering the individual brands to sustain their uniqueness. Maintaining what makes each brand unique will be critical for this acquisition to be successful. Once the brands become homogenized, i.e., the Macy’s/Federated brand mergers, then what made them unique and a special shopping experience disappears.

HBC has also embraced the emerging retail experiences, (pop-ups, stores-within-stores, etc.), and that approach would work extremely well to revitalize the Neiman Marcus brand and make it relevant again.

Well … it makes more sense to me than the Macy’s deal. That said, I may be in the Mark Cohen camp on this one. It all depends on what you define as the critical issue. As wealth continues to polarize in America — a trend we can trust will only accelerate over the next four years — the luxury market becomes simultaneously smaller and more valuable. But are the mega-rich going to support Neiman or are they too going to shop the Internet — augmented by the odd trip to Paris or Milan? Hard to say. A handful of stores catering to high-end luxury shoppers might work, but you would still be fighting the future of consumer purchase technologies like personal digital shoppers. And if Hudson’s Bay thinks there is a market there, wouldn’t it be more cost effective just to build a few boutique stores? You really face a similar problem if you think the issue is infrastructure and poor technology adoption and integration. You can fix the systems, but not the shoppers.… Read more »
1
|
-1
-   Share

The big retail story in 2017 is going to be leveraging all that data. When retailers can get themselves organized to combine customer, transaction and third-party data, they’ll be able to make more meaningful and relevant offers and respond better to market trends. Economies of scale can help make this happen. Ben is right — be aggressive, go big and go long.

There’s very little if anything I like about this idea:

The only winners I see are the bankers involved getting fees … and the lawyers too, if things end badly.

Did I miss something? Has HBC sorted out the ultimate “omnichannel” play? Will Lord & Taylor shine a magic light upon the shopper purchase path?

Like Macy’s sweeping acquisitions of fading regional department stores in the early 2000s, HBC could see some very limited short term gain only to face the crushing reality of the demise of middle market department store retail.

Luxury no longer means what it once did. The range of extravagant entertaining and dressing occasions are both consolidating as we no longer live “departmentalized lives.” Neiman Marcus’s “raison d’être” is no longer relevant. HBC should move along, Neiman Marcus will not help L&T.

I have mixed feelings about this one. Certainly a better choice than HBC buying Macy’s — Neiman Marcus has much more to offer them beyond being just “one more” luxury brand in their portfolio. Maybe HBC is eyeing Neiman’s innovation lab, run by Scott Emmons, as a good source of in-store experience technology for their other brands. Neimans has had quite a bit of good press lately with their technology innovations around the in-store experience and HBC is no stranger to being an early adopter of new tech (remember beacons and Lord & Taylor?).

There’s much to like about this deal, but, you have to wonder what their true strategy is – it’s a little hard to swallow suddenly going from wanting to buy Macy’s to wanting to buy Neiman Marcus. Two very different brands with different customer bases.

Tuesday morning the Neiman Marcus Group reported another quarter of disappointing financial results and announced that it was going to “explore strategic alternatives.” To be sure, some of Neiman’s problems are idiosyncratic, largely owing to a botched systems implementation and a now crushing debt load taken on in a 2013 private equity buyout. Yet the brand’s continuing struggles also underscore how luxury retail has hit the wall and how it now seems increasingly likely that the storied company may need to run into the arms of yet another owner.

When I worked for Neiman Marcus as the head of strategy and corporate marketing, we took a hard look at acquiring Saks. Years later, many of the pros and cons of combining the #1 and #2 luxury department stores remain the same as I highlight in this post:

Should Hudson’s Bay Buy Neiman Marcus? The Case For And Against

Braintrust
"Where the default mindset in the industry has been defense, HBC has been all offense over the last few years. It is refreshing to see in this space. "

"Neiman will fit in very well with the other properties and synergies will occur on the digital side especially."

"The big retail story in 2017 is going to be leveraging all that data."