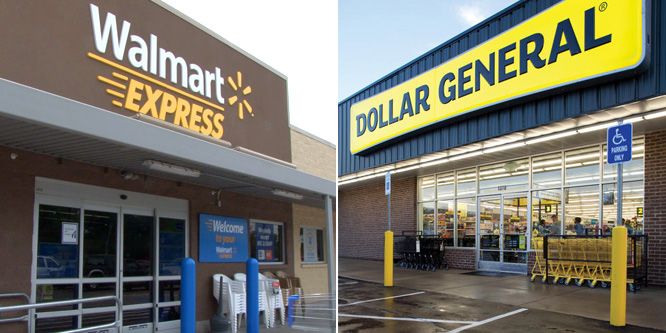 Dollar General isn’t always just about opening new stores. In some cases, it’s about closing existing stores to move into better digs in the same market. Such is the case with the news released this week that Dollar General is relocating 40 locations to sites that previously housed Walmart Express stores.

The nation’s largest dollar store chain also purchased one other store in a new market that also used to be a Walmart Express. Dollar General expects to be up and operating its new locations by October.

The new stores will make use of Dollar General’s DG16 layout, which features an expanded selection of fresh meat and produce. The company will also operate gas stations at 37 of the new locations. The stores became available when Walmart decided to discontinue its Express concept, closing all 102 of the locations it was operating in the U.S.

“Dollar General is excited to add these locations to our existing store base. We look forward to the opportunity to better serve our customers in these communities by continuing to provide the convenience and value they expect from Dollar General,” said Todd Vasos, the chain’s CEO, in a statement.

In March, Dollar General said it planned to open 900 new stores during the current fiscal year while remodeling 875 others. Next year, it plans to add another 1,000 to bring the chain’s count to more than 14,000 locations total.

DISCUSSION QUESTIONS: What is your reaction to Dollar General acquiring 41 former Walmart Express locations? Do you think the DG16 concept with expanded produce and fresh meat will become the favored format for Dollar General?

Please practice The RetailWire Golden Rule when submitting your comments.
Braintrust
"Why not take advantage of a store that is already optimized for retail, storage, etc.?"

"It's a thrill to watch a chain thrive like this in an otherwise challenging environment."

"The most interesting aspect of Dollar General’s acquisition of the Walmart Express locations is its move into fuel."

Dollar General has been on a tear for many years and knows its market. (Imagine the logistical challenges of opening 900 stores a year.) It’s a thrill to watch a chain thrive like this in an otherwise challenging environment.

Why not take advantage of a store that is already optimized for retail, storage, etc.? If it fits the Dollar General footprint it makes sense. Taking over the leases may also be a cost savings, versus negotiating new leases in new locations. Dollar General goes head-to-head with low-price retailers. If these locations are in the right location and meet the Dollar General standards, it will be a good move.

Dollar General already has the Dollar General market format with fresh meat and produce. I’ve been to several and their sales volumes are very Save-a-Lot-esque, about $85,000 per week in my opinion. They tend to be in small rural communities with no other supermarket nearby. Or in difficult urban areas where no supermarket wants to go. My reaction is, “so what?” Walmart was lucky to unload them. Dollar General can probably do better (bottom line, not sales) with a low-volume format than Walmart. It is not going to be the favored format. So far the Dollar General Markets have been few and far between. Dollar General is just taking advantage of some distressed real estate bargains. Would you buy your perishables at Dollar General? Probably not, right? Unless it was your only choice. That’s where Dollar General tends to open these kinds of formats. Sure there are a few exceptions, but only a few.

It’s a safe bet that Walmart didn’t pick bad locations. So why not put an optimized format for the space there? Makes total sense. Or as the refinance your mortgage guy on Chicago radio says, “it’s the biggest no-brainer in the history of Earth!”

The most interesting aspect of Dollar General’s acquisition of the Walmart Express locations is its move into fuel. In late 2013 the company first tried retailing gasoline as a test in Alabama. Didn’t hear much about the test and any of the actions that followed. However, this acquisition definitely puts them in the fuel business.

The acquisition of the Walmart Express sites is significant because it positions Dollar General to be an even more effective competitor to the c-store industry. Ironically, should they grow their fuel business, it helps them compete against Walmart.

My reaction has more to do with Walmart than Dollar General, namely that the former was ill suited to running small stores (as for DG: 41 stores out of 14,000 — 14,000! — seems even less than a drop in the bucket).

Nevertheless, the WMT experience does perhaps offer a cautionary lesson to DG about the perils of going outside your comfort zone. If they can make an expanded format work, then good for them, but as Tony O — or any other grocer — will certainly tell you, packaged goods and fresh are a world of difference … tread carefully.

Braintrust
"Why not take advantage of a store that is already optimized for retail, storage, etc.?"

"It's a thrill to watch a chain thrive like this in an otherwise challenging environment."

"The most interesting aspect of Dollar General’s acquisition of the Walmart Express locations is its move into fuel."